As you’ve no doubt already heard, Google is planning to unveil some new Nexus-branded goodies on Monday. LG’s Nexus 4 smartphone has been examined in what seems like excruciating detail already, but now leaked images of Samsung’s Nexus 10 tablet (obtained by BriefMobile) have begun to make their way ‘round the web.

An earlier leak of the Nexus 10’s instructional manual gave us a rough sense of its size and dimensions, but these new images add some much-needed context. First impressions: it’s actually pretty ho-hum in terms of industrial design. There aren’t enough photos floating around to form a really clear impression of the hardware, but (in usual Samsung fashion) it looks awfully slim and more than a little plasticky. The front-facing speaker placement is one of Samsung’s preferred (and rightly so) design choices. Most concerning is the patch of textured material running horizontally across the tablet’s back. Samsung seems to have gone for the same aesthetic as the mottled, leather-esque finish on the Nexus 7, but didn’t quite feel like swathing the entire back plate with the material.

The tablet’s looks may not be the most provocative, but the display should cause some ears to perk up. According to BriefMobile, the 10.1-inch Super AMOLED panel runs at a whopping 2560×1600, which works out to a pixel density of 298.9ppi — Apple’s Retina iPad tops out at 263.92, in case you were wondering. The internals are no slouch either — it’s being said that a 1.7GHz dual-core Exynos processor is running the show, with 2GB of RAM and a Mali-T604 GPU to help keep things chugging along nicely. There’s apparently no microSD card slot on-board (which is total BS, though not a huge surprise), and the device is expected to ship in multiple memory configurations starting at 16GB. 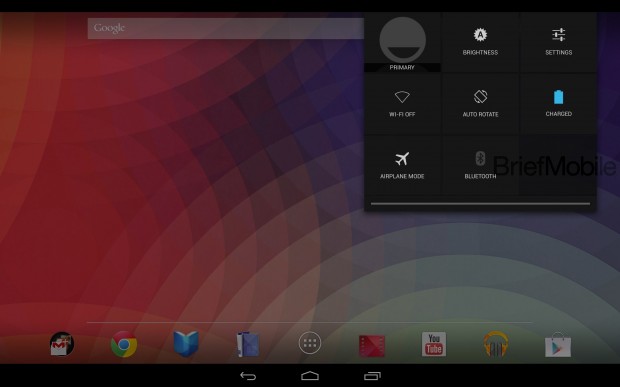 Also on deck is Android 4.2, which as it turns out won’t sport the “Key Lime Pie” moniker. It’s still Jelly Bean for all intents and purposes, though there are quite a few nifty additions to flesh out the stock Android experience. The Gallery app has been updated with some minor graphical enhancements, and the camera interface seems to have been improved substantially. Perhaps the most notable change we’ve seen so far though is the ability to create and switch between multiple user accounts on the device itself — some of us have been waiting years for this to become a reality.

There’s still no firm word on pricing or availability. But considering the leaks we’ve seen lately, it may not long before that info starts spreading too. That said, it seems like the Nexus 10 is going to be the Android tablet to covet — if Google manages to slap a reasonable price tag on this thing, Apple, Amazon and Microsoft could have some tremendous competition to contend with as we head into the holidays.