Everloop, a social network for children backed by $3.1 million in seed funding, is today introducing its first mobile application. Called “Goobit” (remember folks, this is an app for kids), the new app brings the Everloop interface mobile, and includes one of the network’s more popular features – “goobs,” the silly pranks which let kids do things like splatter virtual bugs or toilet paper each others’ screens.

I’m told this is fun, and it makes me feel ancient. 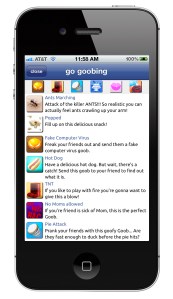 In any event, Everloop’s app presents a safer alternative for kids’ social networking, than allowing them to lie about their age in order to set up an account on Facebook, as many unfortunately do. The app is COPPA-compliant, of course, which parents will like. And there’s also a spirit of celebrating just being a kid on Everloop, which is refreshing in a world where kids are growing up too fast (literally). Meant for children 13 and under, Everloop hopes to at least stall children from heading off into grown-up social networking spaces before they’ve adopted the social skills to handle what it means to have a virtual presence. It lets them practice their online skills during a critical time in their lives – when they have yet to fully grasp the power that virtual actions can have on others. 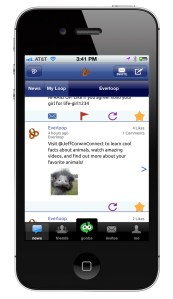 More importantly, Everloop offers a variety of social activities for kids, without the embarrassment of mom commenting on kids’ posts. Parents are kept informed through notifications, but this is not their network – it’s for the kids. A moderation team at the company keeps kids from taking things too far, and prevents posts with swear words, cyberbullying, or other inappropriate content from being posted. When it’s caught, the kids are notified why that message can’t be posted. (For more on Everloop’s network, see our earlier post here.)

In the new mobile app, kids can upload and share photos, post status updates, comment and like things on their own loops and those of their friends (loops are interest-based communities around topics like soccer, kittens, or Justin Bieber), send each other direct messages, share photos and videos from the web, and, as noted above, prank each other using “goobs.”

To kick off the launch, Everloop is also including a Goobit Halloween Decorations Contest which lets the kids upload pictures of wacky Halloween decorations in order to win credits. These credits allow the kids to buy virtual goods in Everloop.

The Goobit app is available now in the iTunes App Store, and works on iPhone and iPod Touch.