There’s been a lot of chatter about the amount of apps in the Windows Store ahead of this week’s Windows 8 launch. Earlier today, I had a chance to sit down with Microsoft’s corporate vice president for Windows Web Services Antoine Leblond to discuss the current state of the Windows Store and the new developer ecosystem.

According to Leblond, just talking about the number of apps in the store quickly “becomes a bizarre conversation.” Microsoft’s focus, he said, is not on “filling the store” but on getting quality apps into the store. The company is not interested in, for example, having a developer write 50 different celebrity apps that are essentially the same. Instead, Leblond told me, Microsoft would likely go back to the developer of these apps and ask him to combine all of these apps into one. Another factor he noted that makes comparing the Windows Store to Apple’s App Store stats difficult is that Windows 8 apps offer a trial period, so developers don’t have to offer free versions of their apps in addition to paid apps. 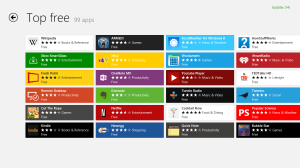 This, Leblond said, is the reason Microsoft itself isn’t releasing any numbers for how many apps are currently in the Windows Store (that’s not stopping others from doing so, though).

One thing he did stress, however, is that Windows 8 will have more apps in the store than any other platform had at launch, though maybe that statistic is also a bit misleading, given that there are also plenty of existing desktop apps that are included in the store but can’t be downloaded directly from it (and obviously won’t run on Windows RT).

As for the number of apps in the store, Leblond expects that more developer will come on board once they get their hands on Window 8 and RT machines in the coming weeks and months.

Talking about the feedback Microsoft has received from developers so far, Leblond noted that developers are very happy to be able to choose between different programming languages for  writing their apps. They are also generally happy about the onboarding process, he said.

One area the company plans to improve, though, is how it communicates with developers While Microsoft tries to be very transparent about where an app is in the review process, Microsoft has to improve how it provided developers with feedback. Right now, for example, it will tell developers that their app crashed during the company’s tests, but it doesn’t provide them with enough information to really hone in on the reasons for these crashes.