Facebook announced its third quarter 2012 earnings today, and are participating in the customary phone call to discuss what has taken place over the past few months.

“We should be able to reach more people on mobile than on desktop” Zuckerberg stated during the call.

Zuckerberg discussed the opportunity of engaging and monetizing mobile users more and more, and the company released some stats that support its growing strength and renewed focus in that area.

Additionally, the CEO pointed out that Facebook’s mobile app holds the #1 top downloaded spot on nearly every platform. How huge is the mobile opportunity? So huge that even Facebook is still in the early days of building up its presence and trying to figure out how best to serve such a small screen with so much information.

Facebook’s user growth on mobile devices makes complete sense, as most of us are on the go when we want to check in on what our friends are up to. For me, Facebook gets used the most when I’m waiting for a train, in line at a store or at a coffee shop. I actually use the desktop version very sparingly, even though I have it up in a tab. Facebook states openly that mobile is driving the site’s growth.

Check out the chart the company released this morning: 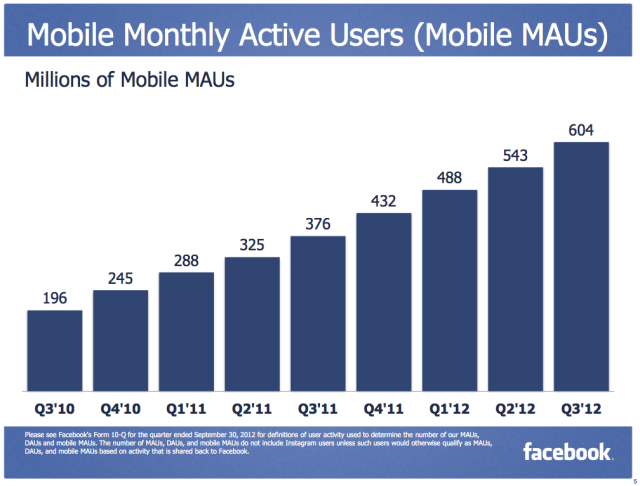 We noted that the company saw 14% of its revenue coming from mobile advertising, which is pretty impressive. With a bulk of users returning to Facebook more often on their mobile devices, it’s clear that the focus must remain there for all companies, not just Facebook.