Brewster, the relationship-centric iOS address book app that went live in the U.S. in July with some fanfare (and a little controversy for good measure), is picking up some more steam. On the heels of an app update earlier this month, this week it is launching across Europe, available for the first time in iOS App Stores across the region.

Steve Greenwood, Brewster’s founder and CEO, says the decision to launch in Europe only after, and not alongside, the U.S. was because he wanted to make sure the app could handle increased demand. That probably turned out to be the right decision. With glowing articles in the New York Times, Brewster investor Fred Wilson and others, the app saw a rush of interest in downloads that went “way beyond” what Brewster had expected, although Greenwood says he’s not ready to share any numbers on how much it’s being used. 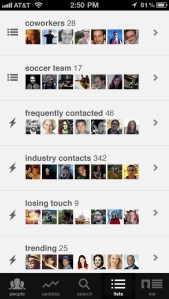 The app itself, if you have not used it yet, is built with the idea of taking a new approach to the conundrum of managing contacts across different social networks, your phone and your email. Sourcing whichever of these you choose to activate in the app, it aggregates all the contacts you have made, merges them and uses algorithms to intelligently figure out connections based on those other users’ activity. It then becomes a centralized address book from which you can then access those other networks.

Of course, the idea of one address book to conquer them all is not exactly new: from early starts by companies like Plaxo (now part of Comcast), there have been Gist (bought and shut down by RIM), Rapportive (now part of LinkedIn), Xobni and lots of others (including small startups like Fruux) looking to solve the problem, both on the enterprise but also on the consumer side.

Brewster’s unique selling point has been how it gives the address book a more personalized twist: incorporating social networks with email, you can find people by their names — and photos if one of the accounts you have connected with them on has them — but also by their interests (eg, music, dogs, work networks) and by location — basically any information that they make public about themselves. The update earlier in the month was largely aimed at improving Brewster’s search, making it, in Greenwood’s words, “smarter, faster and more beautiful.”

He says that this is because the relationship algorithms are now three times more accurate, by monitoring mutual connections and communication frequency. The search, meanwhile, aims not just to give you, for example, people who might be relevant to the word “designer,” but also answer some of the “why” behind that by grouping the results; meanwhile Brewster uses geolocation to identify where you and your contacts are for results in your vicinity.

Brewster was hit with a privacy controversy just after it first launched in July: essentially users were able to see contact info for some people that they should not have been able to see. The company appeared to make a quick recovery from the problem, although some were not convinced that mistakes of this kind with personal information could be so easily forgiven.

The irony is that that Greenwood himself seems to have always thought of Brewster as a private approach to big data: yes, Brewster would process tons of information on your behalf, but the results are there only for you and would never be passed on to or sold to anyone else.

That’s still the case, so much so that whatever business model Brewster eventually has (it’s free right now), Greenwood wants it firmly anchored to that ideal. “Right now the only focus is to create an engaging and delightful user experience, while remaining private and only for you,” he says. “Whatever we do down the road, we will adhere to the same principles.”

To me, one of the most compelling parts of Brewster is in how it might sit as part of a bigger platform — say as Apple or Google’s default contact app, or that of Facebook and its focus on relationships, or even a company like Yahoo, which may be looking for what it might offer, in a new focus on product, that might revive its position in the market.

Greenwood has already been through one exit (he was a “platform to product to business development” guy at file-sharing company Drop.io when it was sold to Facebook), and has been focused on rethinking relationships and contacts for years now (his mother is a relationship therapist, as it happens). He is not in a rush to talk M&A, but he does acknowledge that what Brewster, and its competitors, are doing could be attractive to companies looking for ways to better tie in users to their other services and/or keep them on their platform. “We could be the best partner that Facebook’s ever had,” he says.