Tonight at PandoDaily‘s PandoMonthly NYC event, Foursquare co-founder and CEO Dennis Crowley shared some thoughts about the service. The New York-based company now sees itself as a local search tool and check-ins are not as relevant as they used to be. Crowley considered selling the company but “it wasn’t the right move at that time.”

Foursquare had multiple acquisition offers over the years. “Of course we considered selling. But [Foursquare] is 10 times cooler than we expected,” Crowley said to Sarah Lacy. “I looked back once or twice in the past, but now I never look back,” he continued.

“I came up with a list of ten questions that I needed answers,” Crowley said. Among them: “What would happen if we sell the company?” “Will we get more resources?” “What our budget will look like?” In the end, “we thought about it because it’s a big deal but it wasn’t the right move at that time,” he said.

Comparatively, Austin competitor Gowalla was acquired by Facebook in December 2011.

When talking about the product, “this is the best local search tool in the planet,” Crowley said. According to him, Foursquare is finally starting to use its data efficiently. “Every couple of days, it gets better,” he said. Getting to that point took a lot of time and it only happened in the last six months.

In the past, many people used to sign up and never check in. The company wondered if anything was broken. In fact, users didn’t want to check in, they just wanted to browse the app.

Crowley compared Foursquare’s trajectory to Twitter. Even though Twitter’s content is impressive, many people are just following people and reading content. Now, check-ins are not as important as actual users who browse the app and the content curated thanks to check-ins.

About monetization, “we just now have the tools to build the recommendation engine, to build the dashboard,” Crowley said. Promoted results in the explore tab with places around you will be an important area for revenue. “We made a lot of assumptions about what the merchants will pay for the service,” he continued. He hopes to figure it out in the coming months and to scale up. 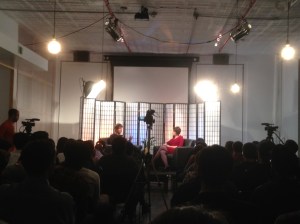 The conversation turned to the number of users. “How many people said ‘I’ll never get a Facebook account,'” Crowley said. Many commenters criticized new services that are now ubiquitous. “Twitter is not just for nerds and sandwiches,” he said.

So far, Foursquare has raised $71 million in venture capital since 2009 over three rounds. The company has 150 people working for it in New York and San Francisco.

“We’ve optimized [our previous funding rounds] to have amazing investors,” Crowley said. “And it’s working.” Yet, he strangely thinks that he is awful at pitching VCs. He talked to 35 people before having a “yes” for Series A funding.

Retrospectively, Dodgeball, Crowley’s previous startup, which was very similar to Foursquare and was acquired by Google in May 2005, wasn’t a major success, according to him. “We were a little bit ahead of our time,” he said. “We had a hard time explaining what the business was,” he continued. But, at the time, working for Google was a dream come true for the team, with a cool job soon after NYU. Crowley kept joking about the free food at Google.

“In hindsight, we thought it was a product acquisition and they knew it was an acquihire,” he said. It was soon after Google’s IPO and tech acquisitions were very different back then. When Google killed Dodgeball, it was a wake-up call. “We’ve got to build this again,” Crowley said.

About the early hype of Foursquare, Crowley was very humble, even if he became a personality with, for example, the GAP ad. “I dont mind [the GAP ads] if it puts the attention on Foursquare,” he said.

Back in June, Foursquare unveiled a totally redesigned version of its mobile apps, with an emphasis on discovery and on the social aspect of the app. Interactions are now easier and you can discover interesting places more easily.

Even though it was one of the pioneers in the check-in space and more generally in the social-local-mobile business (SoLoMo), many competitors have appeared over the years with mixed results, including Facebook. But Crowley now sees Yelp as the main competitor.