The new fraud detection system will look familiar to Google Chrome users. Opera’s new tool aims to protect you from phishing sites and “tells you when a webpage has been marked as being suspicious or used for illicit activity. If you get a warning, it’s a good idea to think twice about visiting that site.” The company first introduced this feature on the desktop. 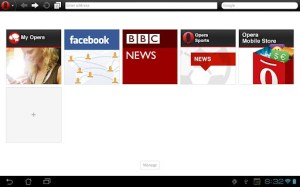 The main focus of this release, though, is clearly on supporting more web standards. Opera 12.10, for example, now offers support for Google’s HTTP improvement protocol SPDY. Now that Gmail, Twitter and numerous other sites have adopted this protocol, we’re seeing more browser vendors jump on board as well, though most mobile browsers haven’t made the move yet.

The new version of Opera for Android now also supports the WebSocket API, which improves the two-way communication between the browser and server and allows developers to create more responsive and richer mobile web apps.

In addition to this, Opera Mobile 12.10 supports CSS Animations and Flexbox, as well as new HTML5 features like native drag and drop and the Clipboard API.