On stage today at Boxworks, Box CEO Aaron Levie and his team unveiled service that will allow people to “Like” and edit documents within the Box environment.

It’s a smart move by Box, a company known more for its file storage than its social features. But it makes sense. Box recently hired Writely Founder Sam Schillace as the company’s vice president of engineering.  Schillace is best known for founding Writely and then selling it to Google, his work becoming the foundation for Google Docs. Schillace’s talents are now on display in the new offering.

How does the service work? Think Google Docs: It will integrate with the new capability to create documents and spreadsheets without downloading in the Box UI. Users can also edit with any file stored in Box without leaving the Box environment. The new social features, such as “liking,” a document will be added soon. You can read more about the new UI here. Here’s a snapshot that they showed today at the event: 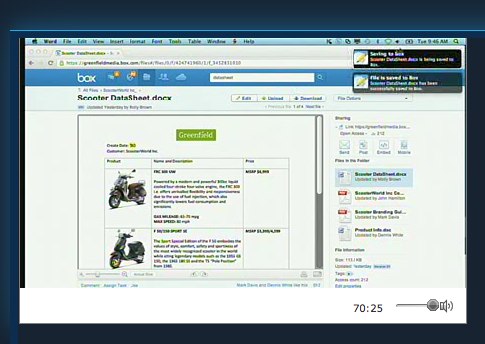 This move is definitely a shift for Box. It puts it closer to becoming a service that goes beyond what we see from Salesforce.com’s ChatterBox in terms of the ability to share and edit documents all inline while keeping it focused on offering best-of-breed capabilities. One person on Twitter said it is like Facebook and Google Docs rolled into one.

The service was announced on stage with Box Embed,which removes extra steps when working with documents. It has features such as drag and drop, direct launch, and saving with no extra steps needed. Ron Miller said on Twitter that the service “..lets you embed full Box functionality in another app within that app. [Which is] extremely important, [because it] makes it part of the work.”

The new features shows how Box is seeking to become the de facto file content management service for the workplace, integrating with any application for use on any platform.