1000memories, the San Francisco-based startup which offers web and mobile applications for storing, organizing, sharing, and most importantly, digitizing, your print photographs, has been acquired. Given the company’s focus on preserving family memories, it’s not too surprising who the new owner is: Ancestry.com. And fortunately for current users of the service, the deal doesn’t mean a shutdown of 1000memories’ website or apps, but rather more resources to continue their development.

Founded in 2010, 1000memories has focused on building a service where users could more privately store and share their collections of family photos – the kinds of photos that mean a lot to a small group of people, but don’t necessarily make sense to store as large collections in more public Facebook albums. The service allows you to organize these photos into virtual “shoeboxes” which can then be shared with other family members or friends via an email invite. You can also select individual photos to share on Facebook, if you choose – like say, if you want to embarrass your little sister by posting a photo of her as a kid, all decked out in some zany costume, for example. (My sister had no shame, as it turned out, and made it her profile pic for a while.) 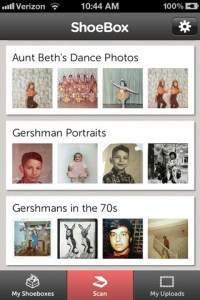 1000memories also offers an iOS and Android application that lets you snap photos of individual printed photos on the fly, crop, flatten and rotate them, then save them to your 1000memories’ account complete with caption, date and tags. Through a partnership with ScanCafe in April, the company began offering a low-cost digitization service that was competitive with and sometimes even cheaper than its competition, for users who had larger collections of prints in need of scanning.

Now a part of Ancestry.com, both the online and mobile applications will continue to be developed. “Ancestry is very excited about our brand and what we do at 1000memories and plans to invest in our ongoing growth and development,” says 1000memories co-founder Rudy Adler. “Our companies are tackling the same problem – helping our users preserve and share their family history – in different ways,” he adds. “Ancestry is helping people preserve the family records lost in the world. We are helping them preserve the family records lost in their closets. We believe we are stronger together.”

Because there’s no shutdown for 1000memories’ service, there’s no transition plan for its 260,000 users. They can continue to visit the same URL as before, and continue to use the 1000memories ShoeBox mobile app, which has seen 500,000 downloads to date. The iOS version of the app is being updated today, with a new feature that now lets users share their scans to their family tree on Ancestry.com. This is the first step in a broader plan to tightly integrate the two services. An Android update will follow in two weeks.

Although terms of the deal are not being disclosed, Adler says that they worked closely with their investors and they are happy with the outcome. 1000memories had taken in $2.54 million in outside investment from Greylock Partners, Y Combinator, SV Angel, Founder Collective, and Lowercase Capital, as well as individual angels. All six of 1000memories employees will join Ancestry.com, and will work of Ancestry’s new HQ in SOMA.

Ancestry.com now has 2 million paying subscribers, and houses over 39 million family trees containing 4 billion profiles. The company acquired another Silicon Valley-based startup, Archives.com, in April. In June, word came out that Ancestry was looking for buyers, and currently, London-based Permira is said to be interested in resuming negotiations, but no deal has yet been made.