As anticipated in August, digital game seller Steam is now offering Windows non-game applications. It acts like a traditional app store. After the reviewing process, apps are available to purchase in a centralized store. Users can choose where to install their apps in the latest Steam beta. However, like Amazon’s Appstore for Android, Valve can discount apps if it thinks that it would benefit the customer and the developer.

Right now, only a handful of apps are available. It was important for Valve to open the store before the release of Windows 8 to minimize the vendor lock-in effect.

Unlike other app stores, developers won’t get a 70 percent cut of their sales. It will depend on volume, price and other factors. Valve adjusts that value. But game developers have been happy so far with the service.

Graphic and pro applications are currently dominating the selection, with ArtRage Studio Pro, 3D-Coat and 3DMark benchmarking software already available. It might be a sign that Valve is focusing on high-end, niche applications instead of cheap, single purpose apps. Free apps are supported as well.

It remains to be seen if Steam’s usual process to accept new games will be a good fit for the software industry. Steam benefits from a very geeky userbase who already have their credit cards registered in the system. More than 5 million users launch Steam everyday. Tapping into that attention span to sell software could help the launch of the new offering.

Apps will have to coexist with games in the main listings, which is reminiscent of the iTunes Store homepage in iTunes. But there is a separate Software tab as well. 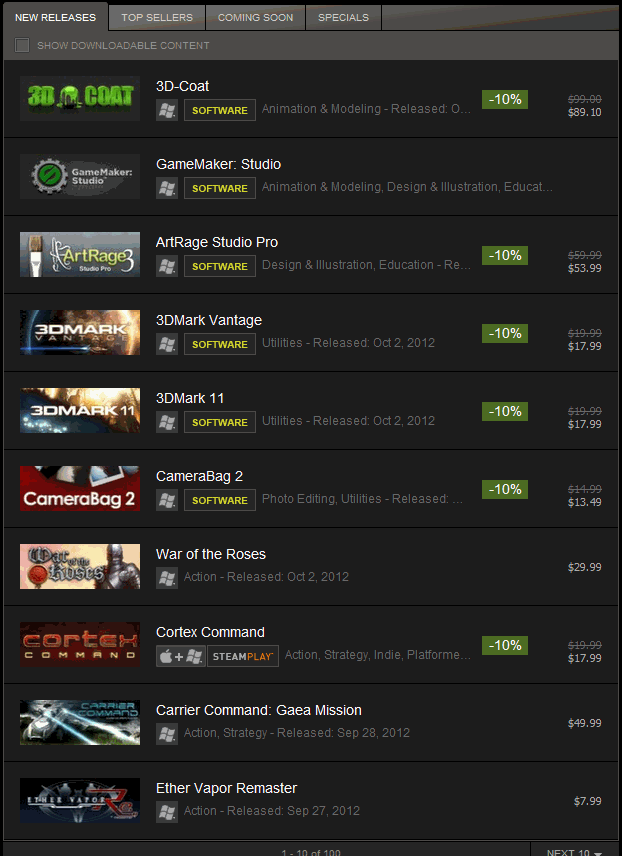