Cloud-based data warehouse company Treasure Data officially opened its doors this week with $1.5 million in funding that includes an investment from  Yukihiro “Matz” Matsumoto – the creator of the Ruby programming language.

The other investors include angel investor Bill Tai; Naren Gupta of Nexus Venture and a director with Red Hat and TIBCO, as well as the people behind Gluster and Heroku. Gluster sold to Red Hat last year and Heroku is now part of Salesforce.com.

Treasure Data has developed a service that brings high-end analysis to the business or business unit that has traditionally not had the resources to afford a solutions from companies like IBM, Oracle or Teradata. Founder and CEO Hiro Yoshikawa says the total cost of ownership for a data warehouse suite from one of the enterprise players can cost as much as $5 million. In contrast, Treasure Data is a subscription service that, at the low end, costs $1,500 per month or $1,200 per month with a 12-month commitment. On average, Yoshikawa says the cost over time is more than 10 times less than what an enterprise data warehouse offering would cost.

The company has been quietly developing a service that in less than a year has more than 10 customers that include Fortune 500 companies. It has more than 100 billion records stored and is processing 10,000 messages per second.

Treasure Data borrows from Hadoop but with a twist. Cloudera and Hortonworks have made their mark with Hadoop distributions that they install on a hosted server cluster run by the customer. It requires customization and a team of people with highly specialized skills .By contrast, Treasure Data does not require an infrastructure investment.

Here is how the company positions what it offers:

Treasure Data adds an agent to applications that then feed into a cloud-based environment as illustrated in this diagram: 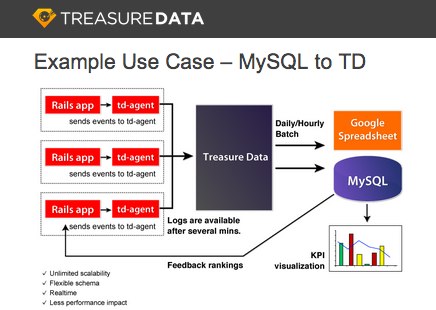 The service works with existing applications, allowing Treasure Data to partner with other companies such as Heroku, Jaspersoft and Engine Yard.

Treasure Data has all the markings of a company with huge disruptive potential. Its challenge is in scaling to compete with the giants. That means scaling in terms of the data it processes and the overall business. But the need for better analytics is significant. Treasure Data is well-positioned to compete in this fast-growing market.