Duck Duck Moose, the startup behind a series of educational apps for children, is today announcing having closed on $7 million in Series A funding led by Sequoia Capital and Lightspeed Venture Partners, with participation from Stanford University. The company, whose paid applications have now seen over 2.4 million downloads, has remarkably grown its brand through word-of-mouth alone, earning 14 Parents’ Choice Awards along the way for all 14 apps. That’s the most any app maker has ever been awarded by the nonprofit, which offers special “seals of approval” to apps, media and toys meeting its guidelines for quality.

It’s hard to be a tablet-toting parent without having stumbled across one of the apps from Duck Duck Moose, whether that’s one of the startup’s more recent titles like Trucks HD, Princess Fairy Tale Maker, or Superhero Comic Book Maker, or one the company’s earlier efforts – such as the apps that let kids sing along to classic kids’ tunes like “Wheels on the Bus” or “Old MacDonald.” In a crowded App Store, they tend to stand out from the pack with their quality design. But more importantly, they’re the kind of apps kids will launch over and over. 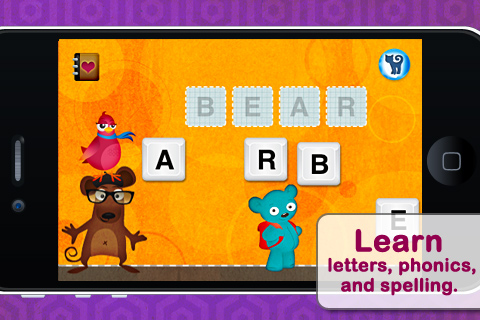 The company was founded in 2008 by Caroline Hu Flexer, formerly of IDEO, her husband Michael Flexer, who has extensive startup experience, and designer Nicci Gabriel. The idea came out of their own desire to see quality educational content in the App Store. “When my oldest daughter was two years old, and wanted to play with our iPhone, I noticed how the touchscreen was really engaging for her and enabled her to interact with technology for the first time,” says Caroline. “Although I could see the potential for learning, there really wasn’t any good educational content out there that was out there for young children.”

With the debut of the first app, “Wheels on the Bus,” in January 2009, the then four-person team was soon on a roll. They went on to produce 11 more applications before bringing in additional staff earlier this year. Now they’re a team of nine. What’s more, they produced the apps from the ground-up, using all original IP and content, including the drawings, characters, animations, and even the music. (Both are classically trained musicians, Michael plays the cello in the apps’ music, and Caroline plays the violin.)

The company also works closely with educators and children when testing their apps, whose focus ranges from creative play to learning numbers and letters. Almost all the apps (iOS and Android) are $1.99 apiece, with just a few iPhone versions at 99 cents, and none (thankfully) offering in-app purchases – something which often mars the experience for younger children who tend to tap all over the screen.

With the additional funding, the company will grow its product line, including plans for more Android apps, and will finish development of a custom analytics and parent-reporting feature that will monitor and report back to parents about their child’s progress. That feature is not yet live but should be done in the coming weeks.

The company is also looking to grow its product and executive team with the funding, notably hiring someone to handle marketing for the first time. In addition, the plan is to eventually reach all of the elementary school market over the next year or two, growing up with their current market (toddlers through first graders) along the way.

If you’re a parent looking for a step up from the horrors of Talking Tom and Ben, you can download Duck Duck Moose’s apps from here.