Love Etsy, but looking for something even more unique? Makeably, a new marketplace for custom-made goods, can help. The site, founded by two ex-Googlers and longtime friends, Ryan Hayward and Anastasia Leng, has just launched into beta, offering makers a new way to manage their custom work requests online – a process which, today, is largely handled via email.

On the site, buyers can search through a variety of categories ranging from apparel to kids’ items to household goods and more, and can check out photos of the types of items the makers produce, as well as the prices associated with the custom work. Buyers can then begin to communicate with the maker about what sort of work they want done, and settle on an exact price and due date.

According to Hayward, both he and Leng had been inspired to create a resource like this, but for different reasons. For him, the inspiration came about from struggles with finding an easy, but still affordable, way to have a piece of art commissioned online. Meanwhile, Leng’s interest was in serving the wedding market, saying that many brides have exact visions of things they want for their big day, from shoes to cake toppers, but often end up settling for what’s available.

After discussing the ways their visions could meet, in August, the two founders left their respective positions in product marketing at Google, which had them working in places like Tokyo and London, and relocated to New York City to start Makeably.

While there are some similarities to the handcrafted goods marketplace Etsy, Makeably offers a different experience. “We do not see ourselves as a competitor to Etsy,” says Leng, “we really see ourselves as a complement, and so do many of our makers.” Etsy has proven there’s a real demand for handmade goods, she explains, but Makeably’s focus on custom work sets it apart. “You cannot buy anything ready-made on the site,” she says. “And our vision is very much to enable people to make what they buy. If you have an idea for something, if you’ve thought of an original gift, or anything else, you can go and pick a maker whose designs you like and work with them to create that specific thing.” 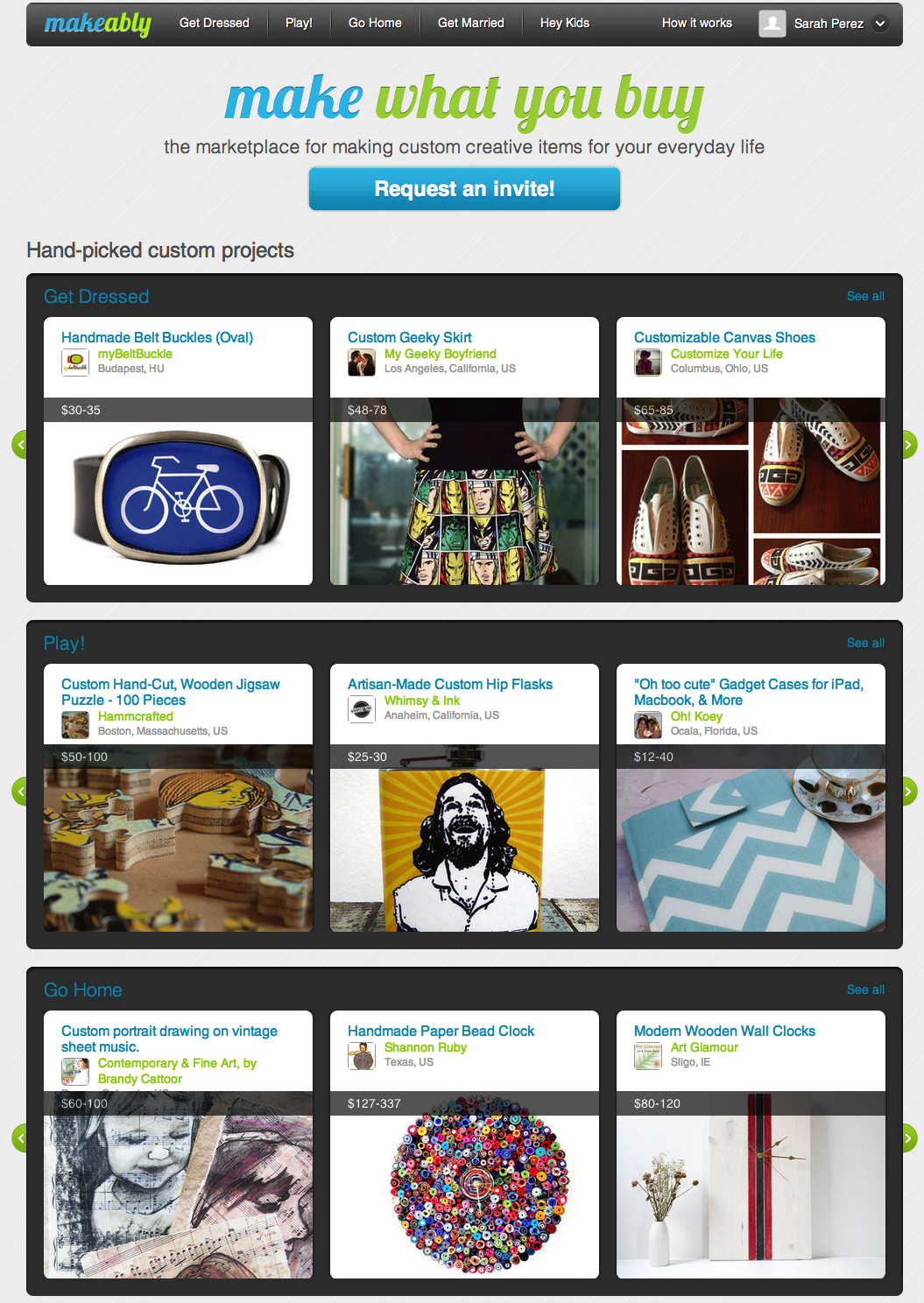 But not to worry – even if you don’t have that creative a mind to have an exacting vision, you can still use Makeably to have a unique, one-of-a-kind item produced for you. For example, if you wanted a custom gadget case, you could tell a maker that you like the color yellow and don’t care for floral patterns, and they could share some sample designs with you. That’s not to say that Makeably is extending into “spec work,” exactly. Many of these makers were already offering custom work, but were doing so through archaic means – like emails back and forth with potential customers. Others prefer custom work because it means they don’t end up with excess inventory that’s not selling on Etsy or elsewhere because they failed to forecast consumer demand.

Hayward explains that the makers housed on the site are also carefully chosen and vetted. They have high-quality items, but they’ve also been selected because of high feedback scores, sales volume and reputation. Many already have an Etsy presence (only around 20-30% do not), but they aren’t leaving Etsy to come here – they’re just adding Makeably as another place to attract customers. 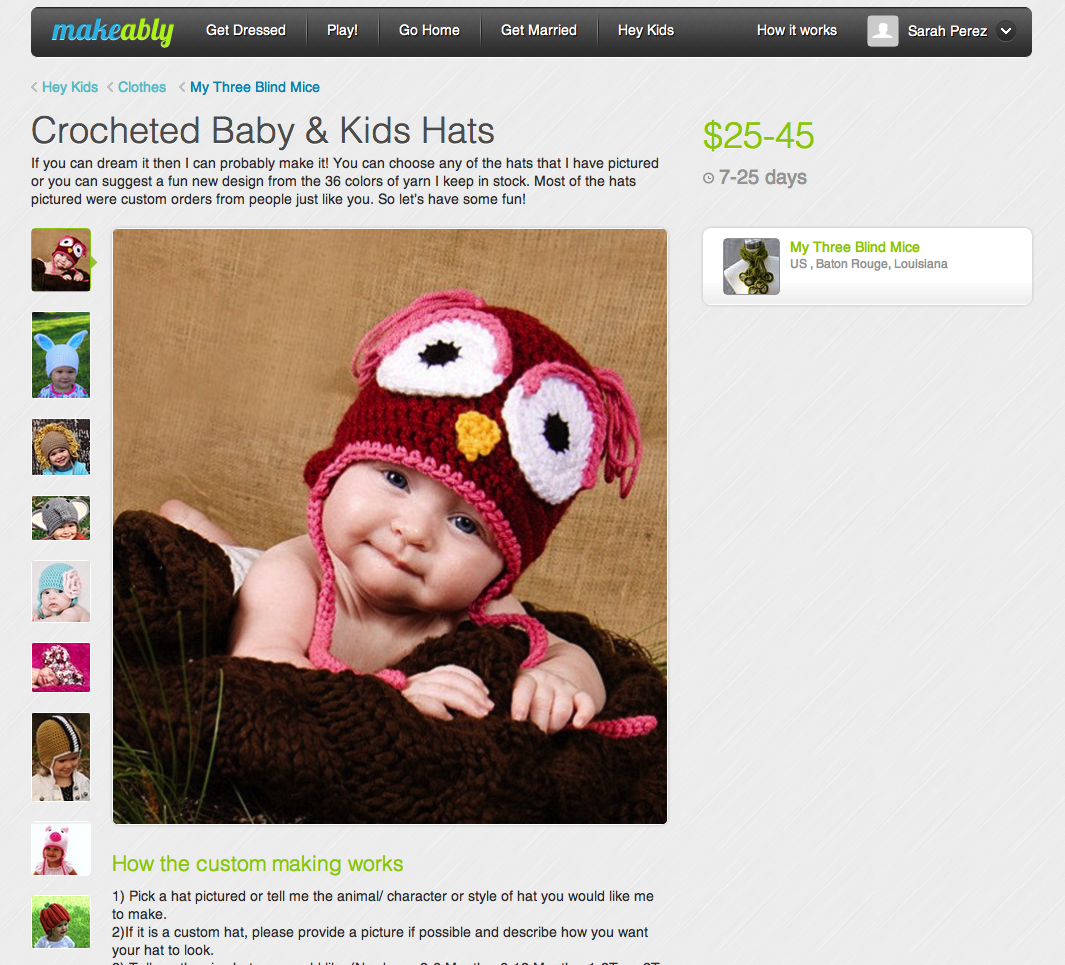 Currently, there are around 100 makers on the site, who have an average of 2 to 3 templates apiece. (“Templates” are the descriptions, prices and photos that explain what the maker can do.) Around 40% of the site is wearables, with the rest being art or other lifestyle items. The majority of makers (around 75%) are U.S.-based, but that will change as the site grows, with more coming in from Asia and Europe in the future.

Makeably doesn’t charge listing or subscription fees for either buyers or sellers, but rather takes a percentage of the transaction fee, which the team currently won’t disclose. (It’s competitive with what Etsy charges, however.) Going forward, they plan to also offer premium features which will help the makers communicate better and plan their buying cycles.

The bootstrapped service is still in a closed beta, but you can use the code “TechCrunch” to try it now. The founders tell us that they’ll start fundraising in mid-October, and they’re already in discussions with angels in San Francisco and New York.