Bureau of Trade, a new online marketplace for men’s shopping, is today launching into public beta and announcing a $1.2 million round of seed funding led by Foundation Capital, with contributions from Founder Collective, FFAngel, Courtney Holt on behalf of the Techfellows Fund, and other angels. Offering a catalog filled with thousands of unique, primarily pre-owned items sourced from collectors, enthusiasts, brick-and-mortar merchants, antique dealers and elsewhere, the site aims to serve not only as a place to shop, but also a place to learn and be entertained.

Michael Phillips Moskowitz, Bureau of Trade’s founder and editor-in-chief, says he wants to use the site to create “experiences” for consumers by telling stories – something he refers to as “transactional entertainment.” It’s not “slash sales,” he says, disdainfully referring to the popular flash sale format of discounting otherwise high-priced items to bring luxury goods to larger audiences. “You should never pay a dollar more than you need to, but you should never pay a dollar less than it’s worth,” he says. “These are valuable pieces that you can cherish for a lifetime, not throwaway pieces.”

The site currently houses a catalog of some 4,000 items, sorted into categories like clothing, shoes, accessories, bags, eye wear, books, LPs (yes, records), companions (e.g. pet items), objects (from corkscrews to typewriters), and more. Shoppers can also browse by region – American West, Eastern Seaboard, The Continent, or The Orient. Items are accompanied by photos, links to buy, origin details and odd but clever descriptions. For example, this “repurposed antique bearskin rug” is suitable for “the beginning, middle and end of seduction,” but not for “vegans, Stephen Colbert and his well-documented hatred of bears.” Oh ho ho. 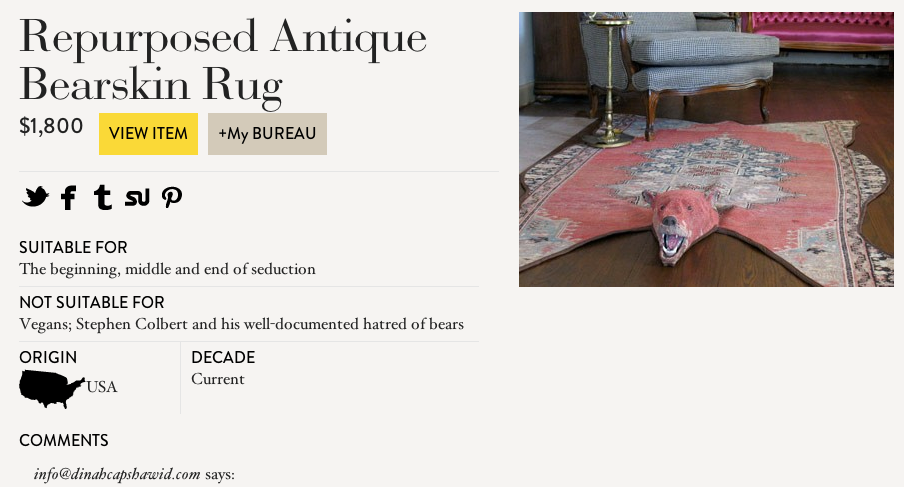 At the top of the page, stories in a section called “The Daily Communique” are written about select items to make them sound appealing. For example:

“Today, we’re showing off our mad stylus with a collection of beautiful, albeit erasable, writing implements. They range from the basic No. 2 (named in a system devised by David Thoreau, father of transcendental pencil enthusiast Henry David Thoreau), to mechanical pencils for the exacting draftsman. While many luxury houses produce gilded pencils to accompany their fountain pen collections, we find the contrast between the heft of a thick case and the fleetingness of the lead disconcerting. A pen is for signing. A pencil is for revising.”

Now you really want to buy that pencil, right?

In the future, the plan is to introduce video to aid in story telling, making the item seem more desirable the way that a movie can make you want to run out and buy the leather jacket sported by its charismatic star throughout. These will not be “viral” videos, however, says Moskowitz. “The mechanics of virality basically come down to idiocy, nudity, accidents, violence, and sort of perverse spectacle. None of those things are on-brand for us. The mechanics of popularity on the silver screen and television are largely determined by sophistication, irony, plot, character and fidelity…that’s more what’s on-brand for us.”

Moskowitz, who started out his career as a Middle East foreign policy analyst, worked at IDEO most recently. He also previously created urban guide TODO Monthly, menswear label Gytha Mander, and, oh, a side project called What Would Matthew McConaughey Do?, now shuttered. (“I didn’t want to do it…I didn’t want to sit in a room answering the questions of psychopaths,” he says. Zing!)

The company, which has been in private beta since February, has grown to 40,000 subscribers, and sees north of 3,000 daily visitors. The plan is to further market itself through a variety of mediums, including social media and even offline events like live auctions and “intimate dinner parties” in cities across the U.S. They’ve already had one in San Francisco, and will do so again next month. Only the site’s most engaged visitors are invited.

Although now largely a collection of pre-owned finds, Bureau of Trade is also working with designers and merchants to offer exclusive content, and will also begin selling original clothes and accessories in the future. Aimed at men 28-45, it’s “not trying to be all things to all people,” but will be the first among a portfolio of sites, each catering to a specific demographic. In the works is Interrobang, aimed at men 18-24. Asked if one of those sites would cater to women, Moskowitz told a variation of this joke, then replied that he would hire appropriately.

Currently a team of five, the company will use the funding to continue product development and add a couple of new members to the team in San Francisco. 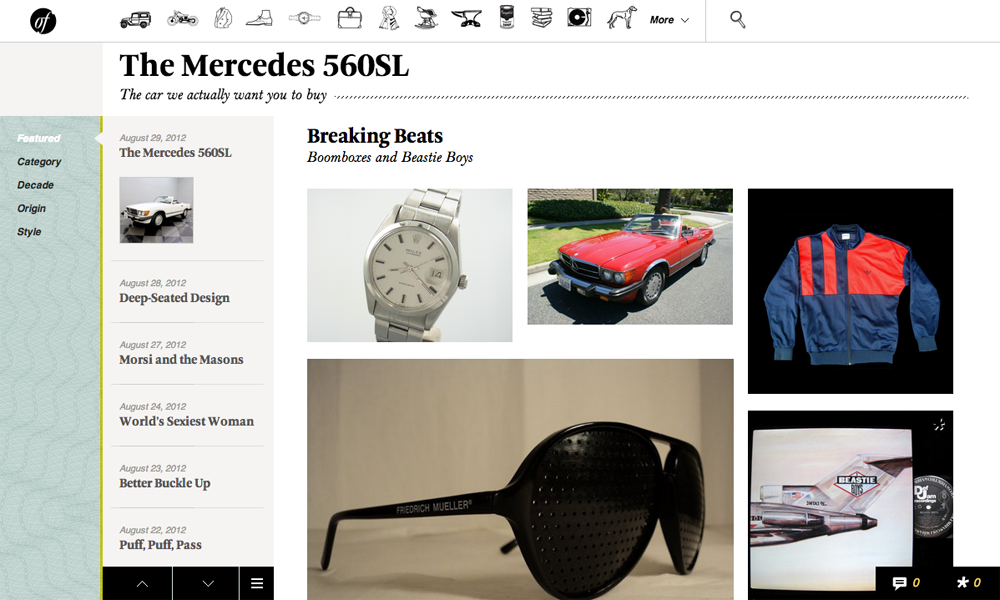 Update: Techfellows’ involvement in the funding was made public after the article was published. We’ve added it for completeness’ sake. In addition, the company erroneously stated that Founders Fund invested. It was FFAngel, we’ve learned.