As the world of technology gets more and more mainstream, and some of us ponder how the story of startups and tech is namely one of scale and fast growth, the folks at Twitter Counter have been in touch to alert us to yet another milestone: Twitter’s very close to having its first user reach 30 million followers.

The illustrious user is none other than singer/monster-lover/occasional tech-investor Lady Gaga. She currently leads the pack with the most followers of anyone (29,720,860 followers; 137,546 followed; 1,950 tweets) and is set to hit the landmark 30,000,000 in about 12 days, according to the analytics company.

Size and scale may be important metrics of success to investors, and 30 million is one of those numbers that says, “Damn, Twitter’s big,” but apparently simple Follower count isn’t such a big deal to everyone.

Ironically, Ev Williams, one of Twitter’s co-founders and a board member, yesterday made it pretty clear that followers are not the metric that is most interesting for him, and perhaps Twitter, too.

“The thing I think would be more interesting than followers is… retweets,” he said at a BuzzFeed event, noting that measuring followers “doesn’t capture your distribution.”

“The dream metric,” he continued, “is how many people saw your tweet,” he said, before proceeding to note that now that Twitter has restricted usage of its API and reigned in more users to its own clients, it can really start pulling out some stats on how Twitter is used, useful for advertising, and more.

In June, Twitter was estimated to have passed the 500 million user mark. There have been some questions over how many of those users are actually using Twitter, though. Twitter says that 40 percent of its total user base logs in to look but never tweet. Others claim a lot of those millions are fake.

Twitter Counter says that its prediction tool, and subsequent trajectory, are calculated from historical data that charts how a user’s Twitter count has grown. “Lady Gaga shows a steady growth and we have been tracking her for a long time, so I can say this data is accurate,” says TC’s Bram Kanstein.

That also demonstrates how much Twitter growth — as well as Gaga’s — is accelerating. She reached 10 million followers in May 2011. It took 10 months for her to reach 20 million, in March 2012. And now, it’s taken about seven months to get her next 10 million.

The celeb-tweeting thing, of course, goes back some way. Shaquille O’Neil joined in November 2008; Gaga joined in March of that year.

Its track record for celeb-Twitter-counting is pretty good, accurately predicting when both Charlie Sheen and Jeremy Lin (remember Linsanity?) would hit 1 million followers. In all the company tracks 67 million Twitter users. 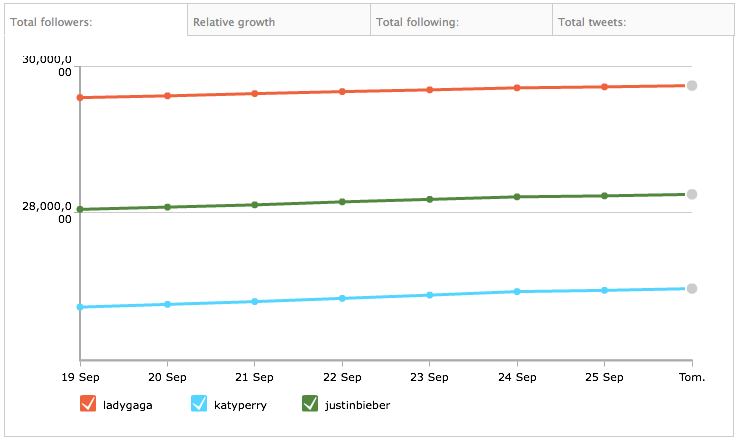