Everywhere you turned last week, there was another story about iOS 6 Maps. Some feel like it’s a great new direction for Apple, but people like me feel like we’re left with an ugly experience that shouldn’t have been introduced to the public in its current state.

Yes, Google Maps was removed from iOS 6, but we’ve known that for quite a while now. What we didn’t know was that Apple would make no real improvements on its own offering from the second developers starting tinkering with the OS until the day it was made public.

As I tried to use Apple Maps for the first time with the first developers version, it felt very unpolished and not well thought out. That’s rare for Apple, so I figured that things would get better. Sadly, they didn’t.

Google Maps has been a major player in the maps space since it launched almost eight years ago. I had no idea what went into making the product, or more importantly, keeping the product up to date. Luckily, the team allowed me to take the same glance at its processes that a few other publications recently had, but a bit more.

As you listen to the company speak, it reiterates its mission of “organizing the world’s information,” but it rarely talks about how that organization actually happens. I took a look and was pretty impressed. Is it something Apple can catch up to quickly? Let’s see, shall we?

Merging the virtual and real-world

After I sat down with Jack Menzel of Google’s Search team, he walked me through how the product has developed, along with plans and ideas for the future. I was able to do the very same thing with the Maps team on Friday. Both products are changing the way we interact with the physical world around us. 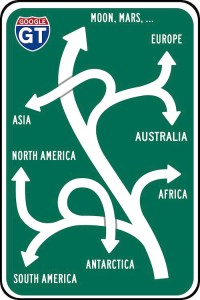 It all starts with a project called “Ground Truth,” which is Google Map’s team that takes all 1,300 sources of map data and merges them into a consumable product that we see on the web and our mobile phones today. It’s not a simple process, but it’s one that is fantastically tricky, involved, complex and yet…full of common sense.

Imagine getting files of junk from every source of topographical information in the world and then having to normalize it for your world-class system that services millions of users. It’s involved, multi-layer and pretty impressive.

I spoke with Michael Weiss-Malik, an Engineering Lead on the Google Maps product, and he showed me the system that it uses internally to munge all of this information together. It’s called Atlas, and it reminds me of Photoshop.

Every piece of information that the company gets turns into a “layer” of sorts, which can be dropped on top of what will become the completed map. Watching someone use the system is the same as watching a designer use Photoshop. There are keystrokes, shortcuts, and well…system issues from time to time. There are also many algorithms backing all of these activities up.

This is how Weiss-Malik summed up what Google Maps does:

If you want to make a map, what you do these days is you collect as many data sources from providers as much as possible: geo codes, water bodies, parks. Things you don’t think about. Even postal codes. There’s really an endless sequence of things. All of the data is slightly imperfect, so we use things to correct this to spit out a higher quality product.

Sounds simple, right? Some other publications might lead you to believe that, but there are a zillion processes that go on behind the scenes, including double and triple checks of every single change that happens before the entire globe can see them.

Make one mistake as a company on a road change, and it could cause serious problems or danger for someone.

If someone is exploring a new major city road in the United States, they have to use all of Google’s tools, including Street View, to get every single detail down just right. I’m talking links to proper signage and everything. Think about it, this data is what shows you and maybe your car where to go, so it’s pretty important that it’s right and thorough.

Here’s a look at what Atlas lets operators do to make sure all of the map data that Google has is updated and correct: 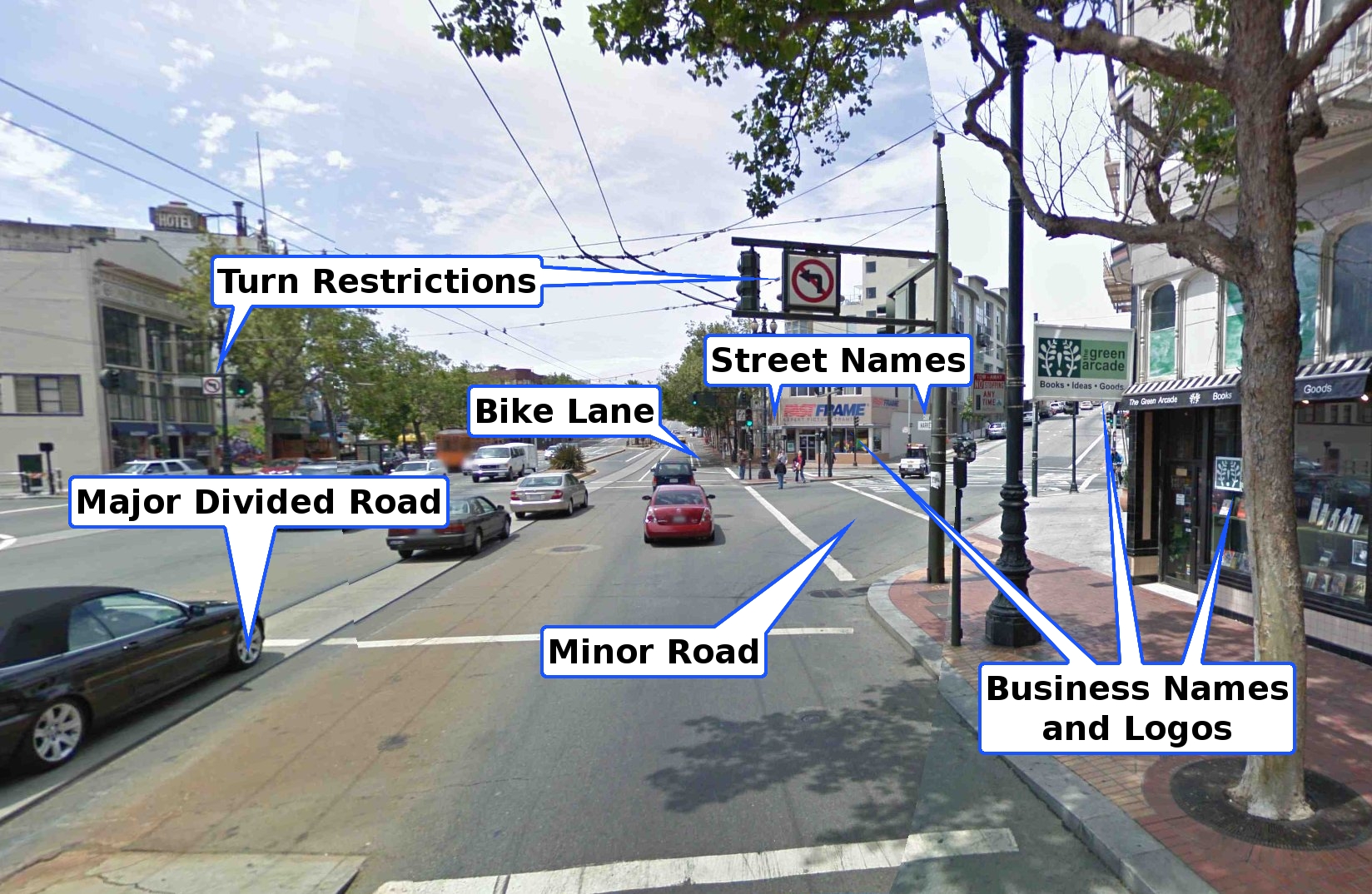 Here’s what they get after that process: 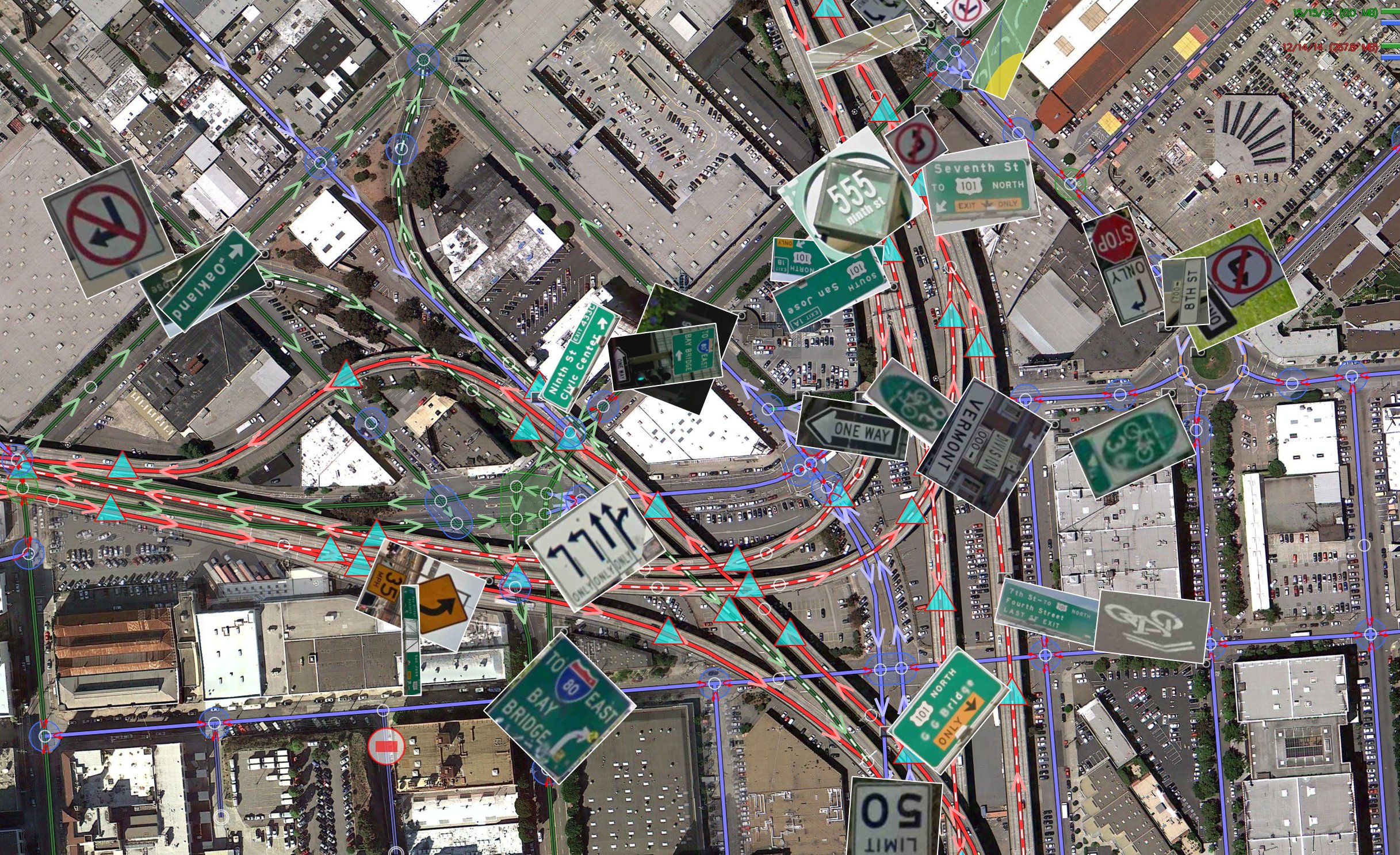 Intersections like this are a pretty tricky thing to get right, according to Weiss-Malik:

This is where Street View is very critical. This is a simple intersection. We examine all of the intersections, determine where you can and can’t turn. Our operatings jump into 3D mode, so you can see what you’re editing. Grab a no uturn sign as an “Observation,” to leave yourself breadcrumbs as you move around the system.

If there’s something that an operator can’t quite figure out, and this road is a major artery somewhere in California, they can file a ticket to send a Street View truck out again to survey the area. It’s that efficient, and that processed filled.

“Mapping the entire world,” as everyone on the team tells me that it wants to do, consists of sifting through crazy data, running through petabytes of photos and satellite images and then of course providing a stable service scaled as far as scaling can take you. Oh, and let’s not forget that Google makes all of this available via a public API.

As it stands, the team pushes new imagery every two weeks, a lot of imagery. As the company now relies less on third-party information and imagery, it doesn’t have to wait a long time to verify and push the new information. Sometimes it used to take up to 18 months to perfect a city in the United States, but now it can be done in hours.

The big piece of connecting the dots for Google is a new focus on indoor mapping. Telling you where to go when you’re at, say, San Francisco International Airport, is an obsession of Google’s engineers. You should never have to wonder where you are, according to the team.

We source floor plans from business centers, malls, etc. We fit them into the map. There are walking paths, just like regular maps, we mark bathrooms and escalators as well. These are “interior driving directions” to get you to your gate at the airport. This experience is available on mobile devices now.

The future of Google Maps

I also got to talk to Brian McClendon, the VP Google Maps and Earth, and he told me about his experiences at Google since selling Keyhole to the company. Keyhole of course turned into what we know now as Google Earth.

I asked McClendon how Google came to make the acquisition:

The Google founders got excited in 2004. They came in and met with us and made the offer to buy it. Their pre-ipo valuation was crazy, we were very nervous about it. Why we went through with it was Google had two things we didn’t have, scale and data. Larry (Page) was willing to write a check to buy satellite imagery for us, on the spot.

During this time, a small team was working on Google Maps. This team included former Google and Facebook employee Bret Taylor. The Earth and Maps teams worked together to normalize Google’s data so that both products could use it. That process now allows the entire company to instantly scale everything that needs even a slice of location information.

What about the future? McClendon was pretty candid with me:

Map data is never perfect; we’re going to try and approach “perfect.” If you’re not close enough, people get frustrated. If you’re really close, people do depend on it more.

For Google, the next level is serendipitous discovery. We should provide you with the best experience that you care about based on location, searches, friends, likes and time of day. That is a near-term must have and it relies on data, coverage and quality.

Apple: Can they win the location battle?

Obviously, Apple decided to make the choice to pull Google Maps from its phone’s operating system for a reason. It’s probably a really sound business reason, slightly pushed along faster than it should have been due to sour business dealings between the two companies.

That’s really unfortunate, because it’s consumers like you and me that will suffer. I have an iPhone 5 on the way. I’ve been using Apple’s Map app for a few months now, and I’m not excited about its future. It feels less than half-baked, even though the company says that it will get better as more people use it.

Google won’t say a word on where it is with its own native iOS 6 Maps app. Not a word. Some folks are saying that it will be available before December, but as I’ve talked to more of my sources, I feel like the company isn’t stumbling over itself to just “get something out there.”

Make no mistake about it, there will be a native Google Maps app for iOS 6, but it won’t be made available until it is ready to blow Apple out of the water, as this is Google’s only chance to give people a true Coke vs. Pepsi test for what they want to use to navigate the globe.

It’s kind of a big deal.

You never want to say never in life, even though it feels like Apple has a long way to come after it made its hasty decision to yank Google Maps from its product. Google clearly has this Maps thing down pat, but even Google admits that it’s not “perfect” yet. To get there, it seems like Apple is going to do something it’s done in the past: copy the shit out of other people by hiring them.

As Steve Jobs once said:

Picasso had a saying – ‘good artists copy, great artists steal’ – and we have always been shameless about stealing great ideas.

This time it doesn’t look like Apple’s just trying to steal ideas, it might be trying to steal the processes and skilled workers behind it. Kind of funny how Google is being transparant about those processes though, huh? It’s their way of saying “Come and get us.” As for the other things that I saw and heard during my visit, stay tuned for that.

For now, I’ll just ask you this question:

Can Apple get “perfect” faster than Google?