When we wrote about Napkin Labs last year, the Boulder-based startup was focused on a familiar problem: How to help brands and businesses wade through the noise of social networks and better engage (and collaborate with) their customers. To do this, the startup created an online lab space that functioned as a collaborative community in which fans could help incubate new ideas and make their voices heard. Using game dynamics, a reward system and crowdsourcing, the platform encouraged fans to get more involved in the design, marketing and development of their favorite brands’ new products.

While IDEO and Quirky have had success in this area, Napkin Labs found that creating a new destination community is an uphill battle. So, the startup shifted its strategy and began building tools that focused on the place where customers of these brands are already spending their time: Facebook. Yesterday, the startup introduced Fan Center, the result of this new focus and a way for brands to go beyond “likes” and build real communities that drive insight, innovation and revenue right on Facebook.

Fan Center is an evolution of the startup’s prior iteration, which Napkin Labs CEO Riley Gibson describes as a community hub — or a “suggestion box on steroids” — bolted on top of Facebook Timeline. Within that box, brands can create campaigns to capture user or fan-generated content to get a sense of who their most influential and loyal fans are, what they’re saying and how they think the product or company can improve. Nike and Pepsi are two familiar names that have already begun using Fan Center to take the temperature of their Facebook communities.

At the time Napkin Labs was beginning to shift its strategy, it was also hearing a lot of feedback from brands that engagement on their Facebook pages was low and they wanted new ways to interact with fans in more meaningful ways. So because driving fans of a company from Twitter, Facebook and other social networks into a new online space was proving difficult, they evolved their tools to be inside Facebook brand pages and integrate with the social graph.

Doing so, they found brands could get more participation from their users, and having a more open system could lead to better engagement and results. So the startup built the first iteration of Fan Center, which were essentially standalone Facebook apps. Today, with the launch of Fan Center, those have morphed into a single hub that incorporates all of the startup’s community-building tools to let brands manage their crowdsourcing campaigns.

If that sound confusing, Fan Center is basically just a destination where brands can get a sense of who their most active fans on particular campaigns happen to be. Businesses want deep data and analytics on the types of people contributing to their efforts (who they are, how they’re influencing other fans, etc.), so Fan Center lets them view those metrics in one place. 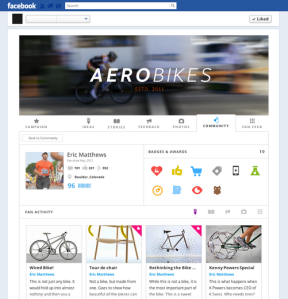 As to how it works: Brands can add Fan Center to their Facebook Pages, at which point Napkin Labs can help them customize Fan Center to fit their individual branding, theme, etc. It then gives them prompts or ideas on how to get ideas, stories, and feedback from their fans and create a project, for example to crowdsource ideas around a specific question they may have about a campaign or product.

My question to Riley was, to what extent do brands really want fans involved in product development — is this for their benefit, or just so that brands can gain more demographic info for targeting and better advertising?

Of course, it’s a combination of both to some degree. Companies used to pay thousands of dollars for focus groups, but now they can get the same kind of feedback for free on Facebook, while observing trends in their campaigns (and rewarding those who contribute the most) over time. But as to how deep collaboration goes: Naturally, the team isn’t talking about live, editable CAD renderings and deep collaborative design — that kind of collaboration isn’t a recipe for engaging fans at scale, the CEO says.

In fact, employees (up and down the chain) often get pressure from management to understand their customers better — front and back-end-ers alike. So while the majority of design elements are better left to experts, the majority of products do benefit from a genuine understanding of what customers want. In focus groups with a Facebook spin, brands can invite fans to join private discussion communities within Fan Center to hear their thoughts and dig into different products.

On top of that, Fan Center pulls fan feedback from Facebook, Twitter, and Instagram. Brands are able to quickly identify which fans are continually interacting, or having conversations with, the brand over time through the analytics dashboard. Feedback can be just about anything – from the way a fan likes to “gear-up” with snowboarding equipment for a new season to how they want a product to change. This stream of interactions also reaches individual fans’ news feeds, which broadens the scope of people who might have something to add to the conversation. 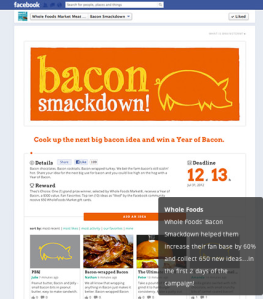 Next, by creating a game layer, the platform allows fans to see how influential they are to a brand and to earn points for that contribution, the idea being to facilitate connections between fans and brands that are deeper over time than one-off social campaigns, for example. So, for fans, there’s a long-term thrill of watching their points accumulate on a leaderboard within Fan Center and getting to see designs or ideas they submitted actually get used by a company — maybe you suggested a flavor which ends up in your favorite brewer’s new seasonal ale.

The short-term incentive, in turn, is Fan Center’s rewards system. Let’s say that you’re a fan of Starbucks and you stay up until 2am to submit an idea for a new product. Fan Center could send that fan a free coffee to thank them for staying up late.

“Incentive has to be a balance of long-term intrinsic motivators, real-time feedback and small surprises throughout the experience,” Riley says.

Furthermore, because we’re talking about Facebook here, nothing that fans do when engaging with the community within Fan Center happens in a vacuum. With its new tools, when a fan shares an idea or photo or story, that action is seen by 144 of their friends — on average — broadening the scope of people who might have something to add to the conversation.

In the end, the CEO says, the company has found that creating big contests isn’t what brands should be focused on, but giving smaller rewards over time as they engage. Under this model, Napkin Labs has seen monthly active users who are also daily active users rise 10 percent — a sign that, so far, it’s working. As for some context, the founder says that Zynga is currently around 18 percent in that regard, so that if they can make participating with brands as sticky as social games … that’s the “Holy Grail.” 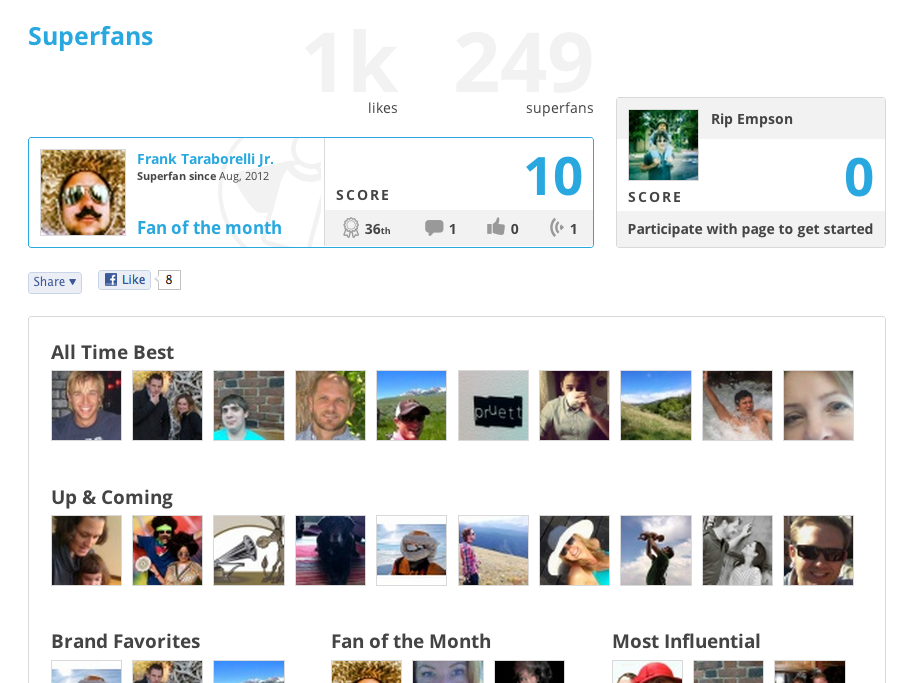