Mike Arrington first wrote about Magnify.net when it launched back in 2007, because, back then, it was taking a different approach to video than the rest. Rather than becoming a hub for the aggregation of user-generated video, Magnify gave digital publishers the opportunity to offer their own video channels populated by video from the video aggregators, user-generated or not.

Since then, Magnify has had to weather an economic downturn and plenty of competition from Brightcove, Ooyala, and the ever-growing YouTube. As the volume of content on the Web continues to explode, with no sign of slowing down, Magnify founder and CEO Steve Rosenbaum says that he thinks consumer content consumption is fundamentally changing. Video curators, which have become critical to discovering, organizing, and contextualizing content, will play an increasingly important role.

But just because you know that your site needs video, doesn’t mean you have to start producing it yourself, Rosenbaum says. Many sites can’t afford their own studio, or to hire a video production and camera team. Instead, Magnify gives them the opportunity to offer curated video experiences, along with providing them with the tech to upload and share videos, create playlists, offer commenting, reviewing, content controls, analytics, and monetization options.

Of course, in the end solutions like Magnify are only valuable if they can help your site offer quality video that people actually want to watch. Today, Magnify is taking a big step in that direction by announcing a partnership with Aol that will make its library of nearly 420,000 videos available to curators using Magnify’s platform.

Rosenbaum says that this partnership is important because, until now, it’s been hard to get paid for curation. As a result, monetizing curation by way of premium content is becoming increasingly popular, he says.

The partnership is a boost for Magnify’s current users, as well, as the content they offer is going to get more diversified in terms of its sources. Through Aol, Magnify will add 40 content sources its curation platform in everything from breaking news and entertainment to health, travel and fashion. The company currently powers more than 90,000 video channels for publishers and brands like New York Magazine, The Week, and Patagonia, which will now be able to offer Aol content in their video channels.

SVP of The Aol On Network Ran Harveno had this to say of the partnership:

We’re always looking for new ways to gain additional exposure for our content and drive advertiser value, and this partnership helps us deliver on that mission … and we’re also big believers in the power of curation, which makes Magnify’s approach to online video a natural fit for us. We see this as an important step in the evolution of how publishers and audiences will engage with online video.

Rosenbaum tells us that Magnify is now powering video curation for sites like TEDx but also works with niche medical sites and athletic sites, as well — anyone who wants to offer a mix of video from outside sources with internal media around subject-driven channels. You can see how this would be appealing to video-based educational platforms like TEDx that also are looking for a little monetization.

Now Magnify will be collecting videos from 40 more content sources around keywords, which alerts editors when there’s a video that matches keywords they’re looking for, along with accepting content from their users. Kinda cool.

Disclosure: TechCrunch is owned by Aol. 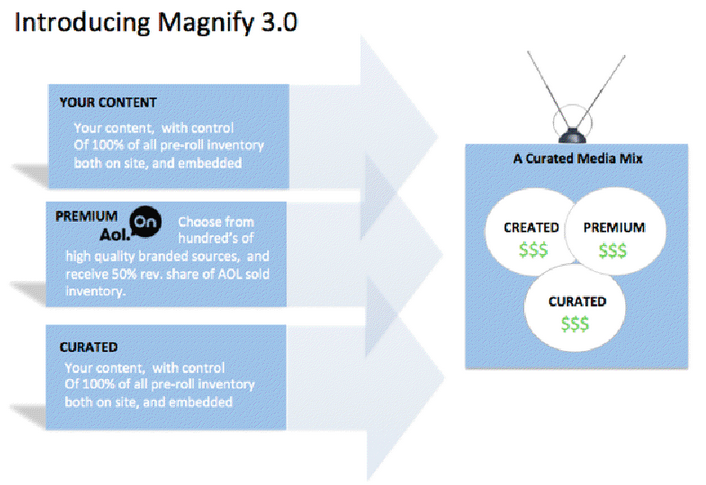