One of the worst things about getting drunk far from home is having to abandon your car overnight which you then have to painfully retrieve it the following day, hangover and all. Sometimes, the car isn’t even where you left it – it’s been towed. A startup called StearClear launched earlier this spring to address that problem by offering a designated driver service that uses driver teams who drive you home in your own vehicle, with another StearClear driver following behind.

Today, the company is announcing some numbers related to its initial traction and an additional round of $600,000 in funding, bringing its total funding to date to $1.1 million.

To be fair, much of the investment so far has been from founders themselves – Craig Sher, Ken Schwartz, Andrew Bares and Harjinder Sidhu, who created StearClear in November 2011. To date, they’ve put in $975,000 of that $1.1 million total. In the new round, which comes from New Jersey’s angel group Jumpstart, five angels contributed $125,000 of the $600K raised. And three of these angels were founders! So, yes, still a lot of founder money here. The other angels, Thomas Chisholm and Neil Rosoff, will now join the company’s board following the round. Sher tells me today that StearClear will soon be ready to raise a venture round later this fall (likely November), now that it’s preparing to launch the franchise side of the business.

Yep, that’s right – unlike some of the peer-to-peer car-sharing programs and black car services, StearClear isn’t trying to manage the entire operation in-house. Instead, it provides services to local entrepreneurs to run their own businesses. Franchise owners pay $30,000 to buy a block of 70,000 people (around 6 to 12 zip codes’ worth) for their business, get access to the turnkey solution, and keep 80% of the revenue generated.

StearClear, meanwhile provides the infrastructure, including the mobile apps needed to run the business, and it handles paychecks, tax reporting, compliance issues, HR, liability and insurance. Drivers, who work in teams of two, earn $8/hour while on call and $12/hour while working plus tips. For customers, there’s a $20 flat-rate pickup fee plus $2/mile. Customers can enter in their credit card info in the app and their favorite addresses to keep on file, or they can pay cash or charge (via Square) in the vehicle.

OK, now the bad news: StearClear probably isn’t available in your area yet. The company ran a closed beta in two franchises in New Jersey from April to June, then soft-launched in July, with plans for a hard launch in October. During this time, StearClear saw 1,500 customer registrations, 3,000 app downloads and has been averaging 6-10 rides per week per franchise.

But that’s poised to change, Sher tells us. The company has had 450 inquiries about franchises, 30 of which are in active negotiations, he says. The plan is to begin phasing these in at a rate of 2 or 3 per month with the expectation of offering 13 to 50 franchises by April 2013. Unlike other transportation-focused startups, there’s interest outside of major cities, where cabs, car services and public transportation are prevalent. The first cities StearClear expects to launch in outside of NJ include Boise, Indianapolis, and Salt Lake City, for example. 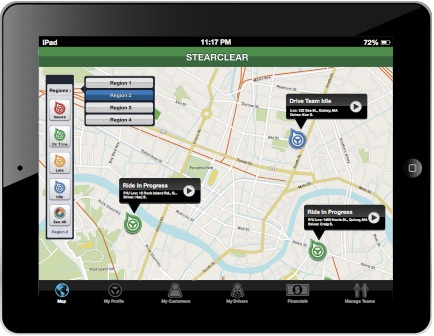 During the beta period, Sher says they’ve learned a lot about what works, and the customer education that needs to accompany their marketing efforts. Customers don’t actually believe that someone will show up, but once they realize that the service works, they tend to return. Half the customers are repeat users and 25% heard about it through word-of-mouth. To encourage more usage, StearClear started working with bar owners who now use its iPad app to arrange pickups for intoxicated customers. This also helps because not all customers have smartphones, Sher says.

If you happen to live in a supported market (currently Bergen or Morris County, NJ) you can download the app here in iTunes or here on Google Play, and proceed to get really, really drunk. As for whether or not StearClear will ever come to your town, I guess you still need to stay tuned for that.