So here’s an interesting predicament that I’ve found myself in today. As you know, the iPhone 5 pre-sale begins at 12:01 Friday morning. I’m ready to pre-order like every other geek, but I can’t. Here’s the gist of it.

I was in Mexico last month, and before I left I added international data roaming services for two of my lines. Pretty standard for me, since I travel a lot. Those additions didn’t stick and while in Mexico, I received text messages warning me that my usage was ridonkulous and that I’d soon be poor.

I called AT&T from my hotel room and explained the situation, and the nice gal said she’d retroactively apply, and, moving forward, make sure that those services were turned on so that I wouldn’t get charged ridiculous data roaming fees. Sweet. Go AT&T.

So today, I log in to AT&T to check my iPhone 5 eligibility and got this:

WTF???? Yep, no iPhone 5 for me unless I pay almost $2K, since the site wouldn’t even show me my eligibility. Not gonna happen. So I give AT&T a ring and explain the situation to three people, including a supervisor. They’ll take the fees off, no problem…but not until the 19th.

That’s not going to work, because I want to pre-order the iPhone 5.

“There’s nothing we can do, sir,” I was told by the supervisor. Well that’s horsecrap. I asked to speak to their supervisor, but was told that they were in a meeting. All of them. I asked the gent to call another call center, but he said that he couldn’t do that.

What can they do for me? Schedule a call for an hour from now with someone. A call, no promises.

Yes, I’m angry. Yes, I will move to Verizon or Sprint if that’s how I get to pre-order an iPhone 5. Does AT&T care? Probably not. But here’s the thing: This is a situation that anyone could find themselves in. A situation where you are a loyal paying customer, get screwed over, and can’t even give them more money for a new phone!

How is that a way to do business? I have no idea. I’ll keep you updated, though. I’m getting a damn iPhone 5, and I don’t care who it’s from.

UPDATE at 3:15PM PT: Since the promised call “within one hour” didn’t happen, I had to proactively call AT&T again. Not much was done though, as I’m told that “nobody here” has the power to credit my account for that large a number. Ok, not my problem, but thanks for the info. I made it clear that my intention is to pre-order an iPhone 5 through AT&T, and continue being a customer. I’m not sure that anyone I’ve spoken to truly understands that part yet. 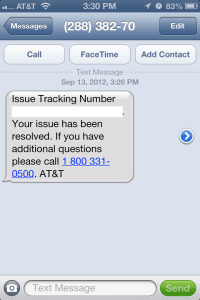 Now, I want to make sure you knew where I was coming from with this. I have heard multiple nightmarish stories about AT&T and their customer service. This situation didn’t seem to be like a customer service one, as everyone was fairly nice, it was about procedure. The procedures in place at AT&T do not swing towards the customer’s side in any way. I nearly had a heart attack when I saw my bill, I’m not rich. I had planned on doing my customary pre-order with AT&T, and the company itself was making it impossible.

Will I stick with AT&T for my pre-order even after this? I’m not sure. All I know is that this whole thing took too much time and caused too much frustration, and no customer, paying or not, should ever have to deal with that. AT&T has enough scale to handle any situation without a hassle, but I certainly didn’t see it today.

FYI, I never ever brought up my post or TechCrunch while I was on the phone with AT&T today, not even once. I am not a jerk, I just care deeply about customer service and experience. AT&T messed up big-time, and I’m not impressed. I would still like to get that call from someone so I can offer some suggestions on how to make sure this doesn’t happen for anyone else. I had to spend way too much time and had to be way too persistent and knowledgable about how customer service elevation works. Ugh.

UPDATE at 4:08PM PT: I got a call from the last supervisor who promised to call me back, but I missed it. I called back and said thank you.