Dispatch reached a milestone today. More than a year ago it became one of the winning hacks at the TechCrunch Disrupt NYC 2011 Hackathon. Today at Disrupt San Francisco 2012 the company showed what that hack has become with an online workspace that connects Dropbox, Google Docs, and Google Contacts for people to manage and collaborate on work projects.

With the service, people create “dispatches” that serve as a place to privately post and discuss links, notes, and files. Dispatches can be for any kind of project. Its value is in serving as a central hub to share from different cloud services. Additional cloud providers will be added over the next few months. 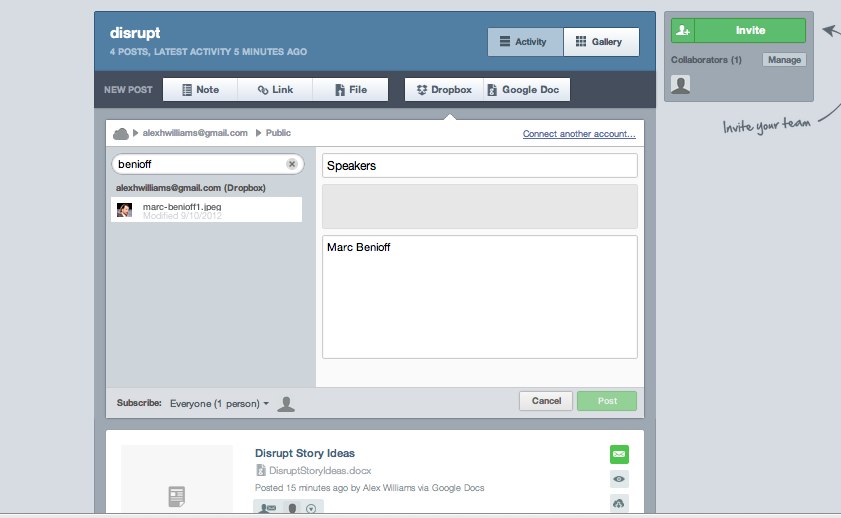 People who get invited to a dispatch can add items and follow and participate via email on messages most relevant to them. The service syncs messages so when updates to a project are made, the people in the dispatch can see them in the Dispatch work space.

The workspace provides a list of all the items added to the dispatch. It can be viewed as a cascading list or a gallery.

Founder and CEO Jesse Lamb said in an interview that the goal is to adapt to the way people work. The problem comes down to workflow more than anything else. It is mostly in email. The process to keep track of screen shots and other data can be vexing. Lamb said Dispatch’s value is in connecting disparate services into one central place where people can collaborate. In Dispatch, people work to use what they have to develop projects.

“We are building a more efficient layer to build upon,” Lamb said in his presentation during the Battlefield.

Dispatch is a freemium service that will initially target the small business community.

The Dispatch advantage is in its open platform. It’s representative of a new trend where the service is actually an API. Twitter pioneered this method. Like Twitter, the heavy lifting is done on the back-end. It is built on Java. The Dispatch stack is built on Amazon Web Services.

The company plans to extend to different services by adding access through the various APIs of the various providers. It’s an approach that relies on the openness of the third party. Changes in an API policy can be the difference. If a service shuts off API access then a user’s dispatches can become seriously hobbled.

The depth of the Dispatch feature set will be the other determining factor. Yammer, Socialcast, and newcomers like Teambox offer project management features, such as Gant, timelines, and various methods to manage compliance issues and internal IT policies.

But in many regards, the advanced features are for another day when Dispatch starts targeting the enterprise market.

Until then, the company will offer a simple set of features that will be fine for most any small business.