Oh, couples. A wife sends her husband to the grocery store, and there’s always some thing that he forgets to bring back, or worse, he messes up and brings home the Tom’s Fluoride-Free Clean & Gentle Toothpaste when what she really wanted was the Tom’s Fluoride-Free Antiplaque & Whitening Toothpaste. And there are hurt feelings because he never listens when she tells him something really important, and he doesn’t understand why it’s such a big deal, and at the end of the day everyone goes to bed kind of grumpy.*

WELL. Couples can look forward to never having that problem again, thanks to the latest version of Avocado, which will make sure once and for all that there’s no miscommunication when one partner tells the other what kind of toothpaste she wants, goddammit. With pictures now available in Avocado’s list functionality, there will never be any confusion over what someone means when she says Tom’s Fluoride-Free Antiplaque & Whitening Toothpaste.** And if there is, it’s totally the dude’s fault.

Avocado is one of a bunch of couple’apps that have popped up over the past nine months or so — a list that includes Pair, Cupple, and SimplyUs, among others. All of these apps are meant to facilitate sharing and communication between partners, and range from Pair’s too-cutesy “thumb kiss” to SimplyUs’ advanced calendaring capabilities. While some are designed mainly to privately share photos, Avocado falls more on the side of productivity and messaging between couples. 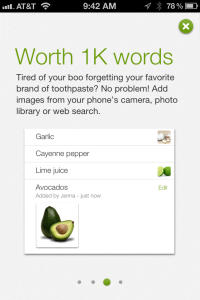 Hence, why lists are so important, and why Avocado believes that it can differentiate itself by adding photos to them. When adding an item to a list, users can either take a photo, choose one from their camera roll, or even search the web for appropriate images.

But the new feature isn’t just for grocery lists or mundane tasks like that, according to Avocado co-founder Jenna Bilotta. Users can also creating aspirational lists, like where they’d like to go on vacation. Or if they’re engaged, maybe stuff they’d like to add to their wedding registry. You know, that type of thing.

Interestingly enough, search is provided by Microsoft’s Bing, and I’m guessing that there’s some sort of “Safe Search” non-porn filter attached, since I couldn’t find any appropriate images to add to the “Things To Do” list I share with my partner.

In addition to images, Lists have also been updated with drag-and-drop functionality that will allow couples to endlessly bicker over which items have the highest priority. Users can also scratch items off the list and have that synced across both user’s devices, so that one partner can wonder why carrots are no longer on the grocery list when she really wanted carrots.

To celebrate the new feature, the Avocado team has made the app free for iOS users, as opposed to the usual $1.99 for the next week. Unfortunately, because Google Play sucks, they couldn’t make the paid app free, and instead are lowering the price of the Android version to 99 cents.

==
* Yeah, if they’re both so miserable over toothpaste, I think they should just split up, too.
** I promise you, Tom’s did not sponsor this post.