Tumblr today revealed a new and hopefully improved design for its default handling of mobile device blog rendering. It’s a clean layout that brings liking and re-blogging to the main page, as well as sharing via Facebook, Twitter and email. Mobile sites also now support Pages, Tumblr’s more permanent locations for stuff like “About Me” sections that live outside of the main feed, and two darlings of the blogging world and mobile web in general, infinite scrolling and full-width images.

The changes are small, but they definitely lend a refreshed look to Tumblr’s somewhat dated previous mobile design (pictured below). The site’s addition of easier to access sharing and re-blogging features also get at the core of Tumblr’s business in terms of how it’s actually used, so it only makes sense to introduce these features on mobile platforms where audiences continue to grow. 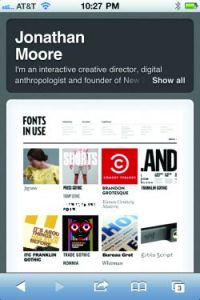 Of course, Tumblr still offers the option to upload your own custom mobile theme, but it’s nice to see a cleaner and more modern default take available that fits in better with recent redesigns by Facebook, Google+ and others highlighting visual content.