If you’re an NFL fan like I am (Go Eagles), then you are probably following some of your favorite teams and players on Twitter . The season starts tonight with the Giants vs. Cowboys, and I really don’t care who wins.

However, Twitter has unveiled a new “get-started” page for those of you who want to follow all of the action. Here’s what the company said on its blog, by way of Omid Ashtari, its Head of Sports & Entertainment:

At 8:30 p.m. ET tonight, the @NFL season will officially commence at Giants Stadium, where the Super Bowl champions @Giants take on their division rivals the @DallasCowboys.

With all NFL teams and a majority of players having an official presence on Twitter, fans can get closer to their favorite teams and athletes.

The page is pretty slick, and you can find it here: 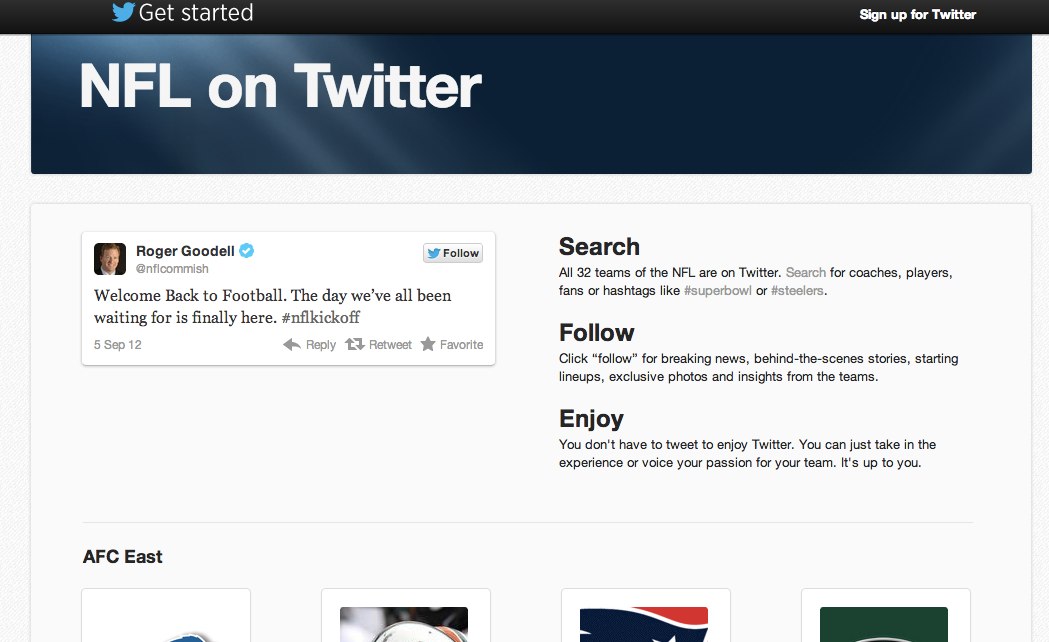 You’ll find some general instructions on how to use Twitter, which is clearly onboarding for new users, but offers some extras like breaking up the teams by division. If you’re an NFL fan, then this is a page that you probably want to bookmark and go back to throughout the season. It’s really too bad that players and coaches can’t tweet during the game, I’d watch that.

While this isn’t a technological marvel, it is a nice usage of what Twitter has at its disposal, which is content and partnerships. Eventually, it would make sense for Twitter to set pages up like this to help sell tickets and gear, which I don’t think teams or the NFL would have a problem with. Or maybe I can just stop thinking of ways that Twitter can make money and leave that to them. Hopefully.