In addition to its raise, eSpark is also announcing that it has hired 5-year Facebook veteran Luke Shepard as its new CTO. Shepard is best known for leading the mobile platform (or “platmobile”) team at Facebook and helping to build Facebook Connect as well as the OAuth 2.0 protocol.

The “edtech” space is heating up as entrepreneurs with experience building consumer products, games and mobile apps make the switch. The recent increase in both venture and public investment in education technology has begun to reflect this. As a result, Shepard had more options today than when he started working at Facebook. So, why eSpark?

Because it’s a harder problem, he says. Selling to K-8 schools isn’t as easy as it is to go for higher ed (less money allocated towards technology, tighter control of its integration, less risk-taking on the “CIO” level and parental involvement), but Shepard thinks there’s more of an opportunity to make a difference in primary grades at public schools. 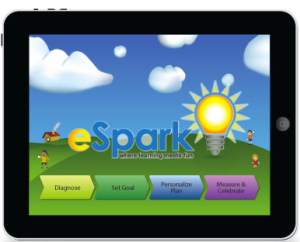 Beyond that, Shepard has some pretty unique mobile experience having helped build Facebook’s mobile platform and having worked with developers on how to use and leverage the breadth of its platform for better distribution (like, say, social discovery), payments, etc. eSpark, too, is on a mission to build a mobile platform for education, giving apps (and their app developers) access to an otherwise hard-to-reach market in K-8 schools.

“For now, we work mostly with iPad apps because that’s where the best content is, but we also use web-based content, podcasts, basically whatever works best in the classroom,” Shepard said. And he wants to help the developers building the best educational content find wider distribution, just as his team did at Facebook.

But before going any further, what is it that eSpark actually does? Primary schools (and parents) are adopting iPads at a breakneck pace, but many struggle to find the best learning experiences from the some-100,000 educational apps and eBooks on the iOS platform. So, eSpark is working with more than 3,000 apps and learning experiences (i.e. eBooks, iOS apps, web apps usable on iOS, instructional videos and songs), curating those apps into custom learning profiles and playlists for students based on their individual needs.

In March, Apple CEO Tim Cook told shareholders that the company sold “more than two iPads for every Mac to K-12 customers in the U.S.” and the San Diego School District purchased 10,000 iPads in March, for example, with plans to buy more.

As a result, the number and quality of education apps on iOS is growing rapidly, the eSpark CEO says, so the startup is on a mission to evaluate all of them, having already evaluated “tens of thousands” of educational iOS apps. 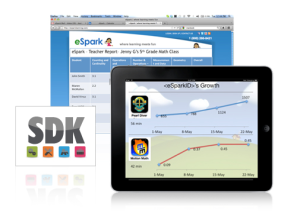 Students login to eSpark through its iPad app, where they are given access to a custom playlist that the CEO says is developed through a combo of human curation and data science. The startup has a number of full-time teachers on staff, who Shepard says are involved in all product discussions and help lead the curation process. As students use their first set of curated apps, the startup measures how much students like the app (via thumbs up or down, a la Pandora) and how much they’re learning, tailoring new suggestions based on the results.

So far, Vinca tells us, student learning growth with eSpark is two to five times the typical learning pace, which it is tracking via third-party assessments like NWEA’s Map test. (Here you can see five case studies on eSpark’s impact on student achievement.)

The 500 Startups grad is currently in 70 schools in 12 states and has been acquiring new customers primarily through word of mouth, using existing partner schools to share stories with other local districts. Today, contracting usually happens with district or school leaders, who absorb the price of eSpark, which begins at $54 per student, per year.

eSpark plans to dedicate its new funding to beefing up its staff of teacher and expert curators (now at 12) as well as redesigning and enhancing its user interface.

It’s a tough for startups to target the K-8 space, but because it’s giving developers another way to access student usage and progress data and incorporate analysis of that data back into their apps to optimize the learning process. Building a mobile platform around the growing landscape of iOS apps is a smart play and as long as eSpark remains focused on using its ecosystem to increase student achievement (and fun), there’s no reason districts won’t continue to get on board.