A few days ago, Google’s gigabit Fiber project in Kansas City had only reached its sign-up goals in about 50% of the city’s “fiberhoods” and a number of areas were still very far away from reaching the threshold for getting Google Fiber’s Internet and TV service installed in their neighborhoods. Today, the company announced that it has revisited these pre-registration goals.

Update (7:30pm PT): Here is Google’s official statement: “111/202 (well over half of eligible) Fiberhoods are currently qualified for service. We’re very happy with this number as we head into the final week of pre-registrations. You can take our blog post at face value—the reason we adjusted our numbers was simply to make pre-registration percentages more accurate.”

According to Google, the company heard about concerns about its pre-registration goals from KC residents and “sent [its] street teams back out into Kansas City, Kan. and Kansas City, Mo. to figure out what changes [it] needed to make.” In doing so, the company realized that its sources for estimating the total number of residences in many fiberhoods wasn’t very accurate. Based on this information, Google has now changed its thresholds in 73 fiberhoods just 10 days before the end of the pre-registration deadline. 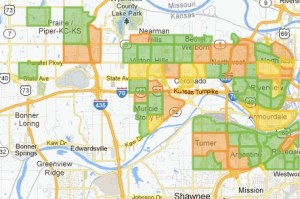 It’s not clear if today’s move was motivated by a fear that Google wasn’t going to reach its goals in enough parts in the city. It’s somewhat suspicious, though, that after double-checking the number of residential addresses in each fiberhoods, every one of these areas is now closer to hitting their goals (except for the two neighborhoods where absolutely nobody has signed up yet).

As Google also pledged to provide free Internet service to schools and other public buildings in qualifying neighborhoods, there was a lot of concern in Kansas City that many of the neighborhoods that could use these services most would miss out on getting hooked up to Google’s gigabit connections. It’s not clear why so many neighborhoods still haven’t met their goals, but there have been rumors that Time Warner and other entrenched cable companies in Kansas City have tried to lock many of their customers into long-term contracts just before the Google Fiber launch. Also, despite the fact that Google Fiber is relatively affordable and even offers a semi-free option, many families may not quite see the benefit of having access to a gigabit Internet connection.