When Digg launched Version 4 in August 2010, users weren’t happy about it. Some called it a revolt. As Kevin Rose said recently in a Reddit AMA, the company made some decisions during the rollout that “went against its core” to stave off declining traffic. As the story goes, it wasn’t long before the layoffs started and Rose (and other execs) resigned from the company.

Betaworks acquired Digg in July and put its News.me team in charge of the site. Six weeks later, the new operators launched a complete overhaul of Digg. However, while interest in Digg had remained (a surprising amount, according to new CEO John Borthwick), the new site removed user access to old data, i.e. everything they’d ever posted to the old iterations of the site, like Diggs, comments, articles, etc.

The new owners had focused on getting the new version up and operational (with less expensive infrastructure) instead, but they promised a rectification to the historic data problem in the near future.

Yesterday, the team did just that and actually seems to have gone beyond what is usually characteristic for new management or a deadpooled/acquired startup to do in terms of access to historic data. They launched the “Digg Archive,” a tool that lets users of the old site (i.e. before July 2012) retrieve their Diggs, submissions, saved articles, etc.

We believe that people own the data they create, so while we work to determine if and how this data makes its way into the new Digg, we wanted to provide a way for users to access their history. It took some digging through the old infrastructure, but the complete Digg Archive is now live.

While a number of companies allow people to export their data after big changes and other sites independently pick up the slack, Digg seems to be one of the few that has actually partnered with other startups to provide a home for its own data via automated importing.

Digg users can either go to the Digg Archive and enter user info (they’ll send you an email with a link/instructions or to Kippt.com/digg, Kipp’s automated, custom importer. Once imported, the site archives them and makes them searchable.

Users can also do the same for Pinboard, a simple, no-frills web archiving and bookmarking service. To do that, download your Digg Archive file, login/create a Pinboard account ($9.88 fee if you haven’t), and import.

The archive also lets users download their historic data as JSON or CSV, too. Pretty good for exporting, however, it seems Digg users aren’t able to search data via the Archive, though that might appear soon. The Digg community never really seems too happy with redesigns (or anyone, ever), and from what I’ve seen, the same goes for the new, new (new?) Digg. But at least they’ve taken steps to make them happy/depressed with access to a data-walk down memory lane. Though most Digg users seem to have just moved on to Buzzfeed or Reddit or imgur. 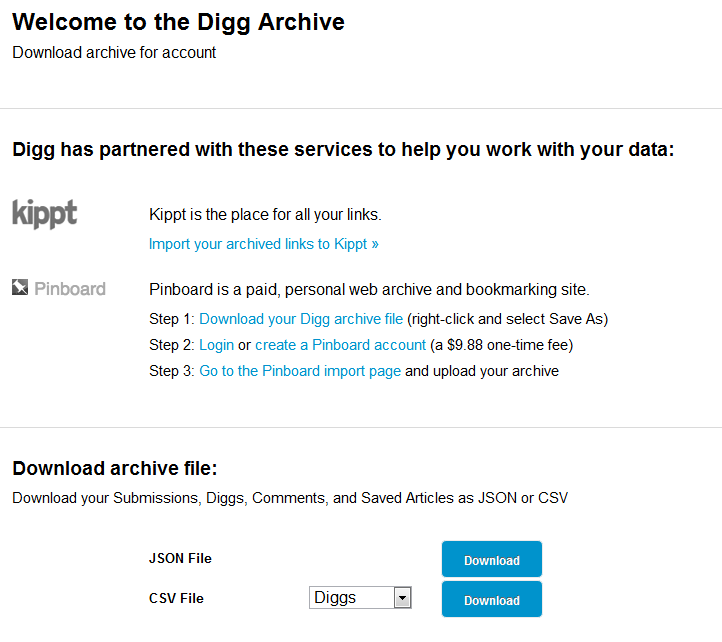