Short version: Western Digital finally has released a new Thunderbolt external hard drive to justify the existence of the Thunderbolt port on your laptop. The My Book VelociRaptor Duo is a desktop external hard drive, which uses two 3.5-inch 1 TB VelociRaptor hard drives. These disks spin at 10,000 RPM and are a good compromise between speed and storage inside a desktop computer. Yet, using them in an external enclosure comes with a major drawback: a hefty price of $899. 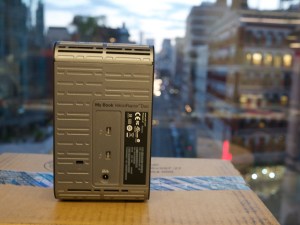 Before diving into some read/write tests, let’s talk about the external features of the VelociRaptor Duo. It is a heavy and bulky desktop hard drive that will sit on your desk in a corner and never move again.

At the same time, due to its speed and limited capacity compared to some desktop external hard drives — you can easily get a slower but comparably sized 6 TB drive for the same price — you will have to find a special use for it aside from storing backups of your computer. An entry-level NAS is another alternative that could be considered at that price.

For example, it would be a good addition to a current-generation MacBook Air limited by its 128 GB or 256 GB SSD. But SSD prices will certainly drop in the coming years.

The exterior of the VelociRaptor Duo is made entirely of plastic. It looks fine when sitting on your desk, but feels cheap when you are moving the drive around. A discreet LED indicates that the device is plugged correctly. The drive is also noisier than the MacBook Pro used to write this review, even when not reading or copying files. 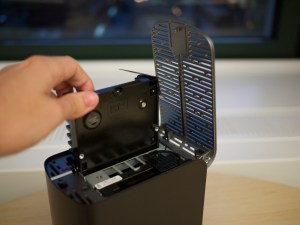 It gets warm, but that’s not very important for a desktop external drive. You can change the hard drives quite easily without using a screwdriver. Even though VelociRaptor drives are standard 3.5-inch SATA drives, there is a sticker that says “Only use VelociRaptor drives.” It remains to be seen if it is a serious claim as for the European patent-protected Nespresso coffee machine or only marketing advice. Finally, a Thunderbolt cable is in the box, a $50 value.

Daisy-chaining multiple Thunderbolt devices is a convenient feature when using a laptop. For example, the VelociRaptor Duo is currently plugged to a MacBook Pro and a display is plugged to the VelociRaptor using a DVI to Mini DisplayPort adapter. Only one port is necessary on the laptop to use those two devices. 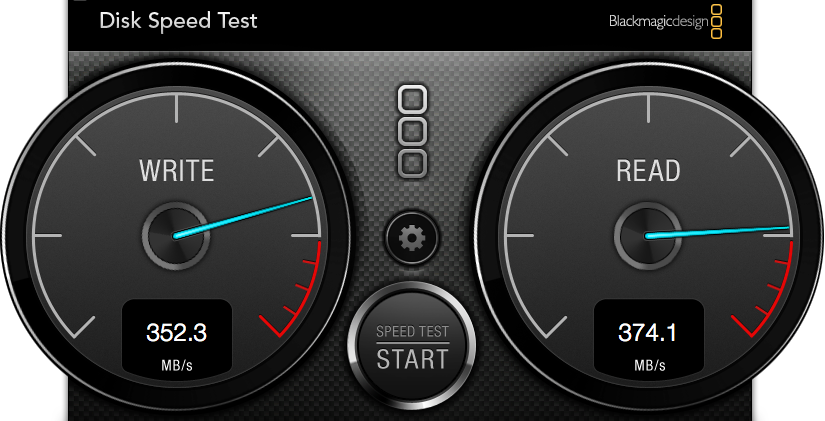 When it comes to performances, the VelociRaptor duo is a nice surprise. In Raid 0, we could measure 352.3 MB/s and 374.1 MB/s respectively for writing and reading large files. Yet, dealing with a lot of small files was much slower with 13.2 MB/s for random writing. That is the disadvantage of mechanical hard drives, but the VelociRaptor Duo appeared faster than the Buffalo MiniStation Thunderbolt. Clearly, the bottleneck is not the connectivity but the drive. 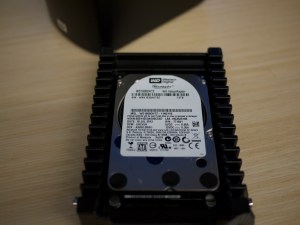 In real-world use, copying a folder from the MacBook Pro to the VelociRaptor Duo would not be relevant because of the 5,400 RPM hard drive found in that Mac. That is why we copied a 69 GB folder containing small and big files already on the VelociRaptor Duo. It took 13’02”, at an approximate speed of 89 MB/s. The same test would have been many times slower using a USB2 drive.

The VelociRaptor Duo is a particular drive filling a particular need for those that feel cramped using a small SSD as their main drive. It is expensive but makes good use of the Thunderbolt interface. Yet, it is very hard to recommend the drive because of the price. As SSD capacities will increase a lot in future laptops, a cheaper desktop external drive with Thunderbolt might be good enough. The rest of the money could be saved to buy your next laptop with a bigger SSD.