Remember Looxcie? The folks behind those tiny, ear-mounted video cameras that first popped up a few years ago? The company has been keeping to itself these past few months, mostly because the team has been slaving away some new and updated apps that they’re finally willing to talk about.

The LooxcieLive mobile app has been around for a little while now — anyone willing to brave the beta could access it as far back as last November — but this new, non-beta version is (thankfully) leaps and bounds ahead of previous iterations. For one, it doesn’t require people to shell out extra money for a miniature camera that hangs next to their face (though the app naturally plays nice with them), so users can broadcast the process of whipping up breakfast using the camera(s) mounted on their iOS or Android devices.

Naturally, not every moment is worth sharing with the world, so users can create more private broadcasts with limited viewer lists. Speaking of viewers, they can easily reach out to their favorite lifecasters via text chat as well as talk to them via a push-to-talk feature just to spice things up a bit. Of course, broadcasting live video from your handset plays second fiddle to, you know, using the thing to take phone calls, so streams will automatically be paused when someone rings up the user. The newly-minted app isn’t without its downsides though: the iOS version in particularly isn’t the prettiest thing I’ve ever seen, and the frame rate for those live videos tops out at 15 frames/second.

That’s all well and good, but what’s really notable here is how the new app integrates with Facebook. Users can now push their live video streams directly to their profile pages, and once the company’s new Facebook app is installed, viewers and voyeurs alike can easily their fix of other people’s lives. From there, those viewers can also pop into different public channels in search of more interesting events to watch unfold. It’s a hell of an improvement over the previous versions of the LooxcieLive app — all it could previously do was update a user’s status when they began broadcasting, and anyone who actually wanted to view that video stream also had to be a Looxcie member. 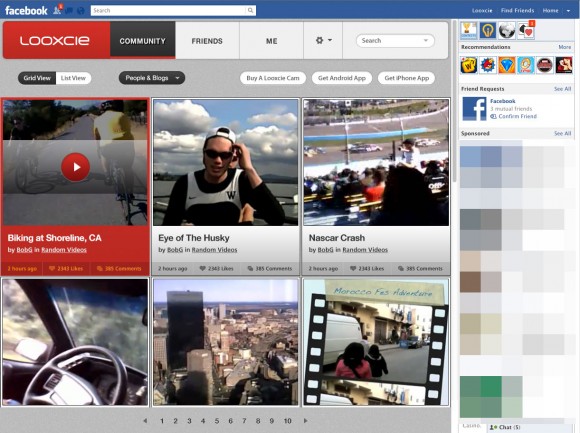