I’ve been in a wonderful state of bliss for the past week boating in North Carolina (did ya miss me? I missed you). But I came back today and I’m still pretty pissed at Uber for charging me $97 for a $65 ride to the airport last Friday. More importantly, the charge worries me about the company’s future.

Last Friday I needed to get from my apartment (by AT&T Park) to SFO. Simple, right?

I like taking Uber and while it’s more expensive than a taxi, it’s a lot more convenient. Plus, I had a red-eye on a Friday, so most of my friends weren’t quite in a state to drive.

I ordered an Uber and got a notification that there would be a 1.5x surcharge as it was peak hours. Makes sense, as it was a Friday night and the first night of Outside Lands. But I didn’t want to pay one and a half times the already steep $65 fare to the airport.

So I looked at Uber’s website and saw nothing clarifying whether surcharges apply to flat rates; Uber notified me on the app and through a text about the surcharge, but, again, it wasn’t clear whether that was for any ride or for non-flat rate rides. I figured I’d ask the driver whether the surcharge applied; if he said yes, I could walk a block to 4th and grab a cab (it was only 9:30).

The driver told me that the ride would be a flat $65.

Standing in the security line at SFO, I checked my email and received a swift kick to the groin courtesy of the good folks at Uber. 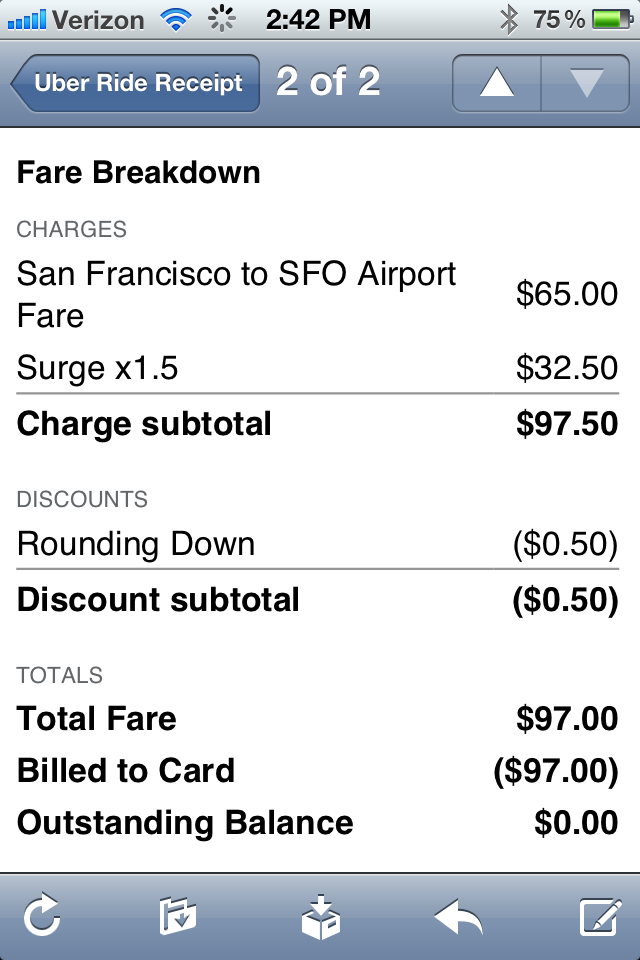 Oh, boy! Thanks for that 50 cent discount, now I can buy a pack of gum for my flight!

Of course, I went through a range of reactions…

From wanting to scream “the price is wrong, bitch” in the security line…

To wanting to go all Johnny Drama on an Uber:

A $97 ride to the airport? For $97 I should be drinking champagne in the back while Dale Earnhardt gets me there in 5 minutes without spilling a drop of the bubbly.

I settled on emailing Uber support. Here’s what they sent back:

I’m sorry for the sticker shock. I spoke to Marcos this morning and he told me that he said the flat rate is usually $65 but that he wasn’t sure what it was due to surge. Our goal is to be as reliable as possible and sometimes we see such high demand our supply of available cars gets tight. To ensure we have rides available for everyone who needs one, we have surge pricing which increases our rates incrementally as our demand outstrips our supply and then lowers them back to normal as demand goes down and cars free up. We take notifying you of the current rates seriously – you should absolutely be aware of the higher cost. So, to that end we show the screen pictured on this blog post on your app:http://blog.uber.com/2012/03/14/clear-and-straight-forward-surge-pricing/

We also include a reminder in our confirmation text that lets you know your driver is on the way just in case: “Hi William, your Uber is en route! Marcos (4.5 stars) will pick you up in 5 minutes. Note that your fare will be 1.5x the normal Uber fare.”

To compensate for any confusion, I’ve put $15 into your Uber account. Let me know if you have any questions!

I replied that the driver explicitly told me that the ride would be $65 (you know, words and stuff, like Me: “Hey, how much will this ride cost?” Driver: “$65”) and got back:

Since you were given the proper ride, were informed of the price and the driver did not pretend to know the exact cost of the ride, I cannot issue a refund. I have put $15 into you Uber account to compensate for the sticker shock. Let me know if you have any questions.

They’re right, the driver did not pretend to know the exact cost of the ride; he just gave me the wrong cost.

So Uber screwed me. But at least it bought me breakfast. Well, gave me a $15 voucher to get to and from breakfast. Like giving someone cab fare or bus money in the morning, but classier!

When I talked to Uber co-founder and CEO Travis Kalanick (for this post as a reporter, not as a customer relating to my complaint), he told me that the driver has no motivation to lie and that these are often “he says, she says situations.”

“You would have never been able to get to the airport without our dynamic pricing,” Kalanick tells me. I asked him to clarify exactly what he meant for competition that night. “I mean at all. Because that was the first night of Outside Lands. There are no taxis anywhere…It is what it is. It was on one of the top four nights of the year”

This post isn’t just about me being pissed off about my personal fare increase. I still think Uber is a great company. I’ve covered their awesome marketing before and while I haven’t decided if I’ll keep using them, I really have enjoyed my time as a customer.

The company currently enjoys a large user base who is very devoted to them. And the surcharges aren’t unfair if you understand how supply and demand work. But the lack of transparency and not being willing to admit when you’re wrong would really worry me if I were running Uber. People get pretty pissed off when they feel they’ve been robbed or lied to.

I’m not the first one to be pissed at Uber for their surcharges (New Year’s Eve, anyone?).

“We run this in a bunch of cities in the weekends and we don’t have many complaints,” Kalanick tells me. “People don’t like higher prices. That’s just a natural thing. But we’ve made it pretty clear at this point…People have to take responsibility for purchases.”

Entrepreneur Brenden Mulligan wrote about redesigning the surge pricing screen to be more transparent to users after the New Year’s Eve fiasco, which Kalanick says the company learned a lot from, and Uber took some of his suggestions into its redesign in March. That’s a very positive thing.

“We need to make our best efforts to make sure that pricing is understood beforehand,” Kalanick says, explaining that they are always working on their algorithms and messaging. “Unhappy customers are not good for business.”

But the latest version still doesn’t explicitly tell users that surcharges affect flat rates. It still doesn’t give users the resources to get a quote for a certain distance and/or time rather than sticking to a range of average fares. And finally, it should have better informed drivers who understand the rates and can articulate them to users.

A continued company culture of expanded up-front honesty with customers will help keep Uber growing and expanding its user base. Without it, they’re no better than the cab companies.