In 1998, seeing an underserved niche in the textbook market, Jeff Sherwood and his three co-founders launched BIGWORDS. By the beginning of 2000, they had grown from a team of four to a team of 250, had a warehouse in Kentucky, raised close to $80 million in outside funding, made a few commercials featuring Tom Green and even had a $100 million acquisition offer from a young Amazon. Although it stings a little in retrospect, Sherwood tells us that the board shot the offer down because it believed BigWords could be a billion-dollar company.

Not to be. The bubble burst, and less than a year later, the company was bankrupt and was forced to close shop — a familiar tale for those who went through the dotcom crash. And like so many others, the BIGWORDS team dispersed after the company closed shop and was left to pick up the pieces and move on. But now, after changing directions and getting smart, BIGWORDS is profitable and growing.

Sherwood, in contrast, couldn’t let the idea rest. He still saw a valuable brand and potential in BIGWORDS, so he decided (against better judgement) to borrow money from his dad. He bought the site, trademarks and domain at the company’s bankruptcy hearing and started again from scratch.

Today, nearly ten years later, BIGWORDS.com has no venture capital backing or celebrity endorsements and is a fraction of what it once was, but it’s growing and growing steadily. It’s a far more stable business, having reached profitability early on. In fact, Sherwood tells us that the company has seen a 15 percent year-over-year growth rate over the last five years and that this year BIGWORDS.com will do $20 million in referred sales. (He’s even paid his dad back on that early loan.)

Why is it “working” the second time? In the aftermath of the crash, the market was littered with dotcom failures, and so the founder remained focused not on PR or marketing, but being slavish to the company’s customers — to building a service that would, simply put, help students save money on textbooks. Plus, he puts 50 percent of the company’s revenues back into growth every year and made a vow to anyone willing to sign on that BIGWORDS wouldn’t expand or deviate from its mission “until they got textbooks right.”

While the company does do grassroots marketing on over 285 campuses, Sherwood says that it’s been hard to get the message out. Textbooks aren’t the sexiest topic. Actually, the mere mention makes most students grimace. Not only that, but if you’re looking to buy textbooks, the market offers plenty of options. Consumers have Amazon, Chegg and over 20 other sources where they can buy or rent textbooks.

But, avoiding the mistakes of the first go-round, BIGWORDS.com today doesn’t want to be an Amazon or a Chegg. That is to say Sherwood wants the site to be the best place to get textbooks online, but doesn’t want to deal with inventory, shipping, processing and all those margin-lowering supply processes.

Last week, Amazon launched its own textbook rental service to compete with the likes of Chegg and Barnes and Noble, and Sherwood says that the first company Amazon called to partner with was BIGWORDS. Why? Because today BIGWORDS is a price comparison tool, designed to bring price transparency to the space and give students advice on where to find the best prices on textbooks, no matter where they live — Amazon’s new service or otherwise.

In other words, the company wants to sit in the middle of (and work with) all these textbook rental and sales marketplaces — to be an unbiased broker of information by becoming the equivalent of Kayak for digital and traditional textbooks.

Behind tuition and room and board, textbooks represent the largest source of costs today for college students. But anyone who’s searched for textbooks knows that the cheapest source for one textbook may not be the best place for another, so now gives students the ability to pick and choose, automatically finding the right permutation. Students can select four books, putting them in their shopping cart.

In the below example, you can see that retail price is $690.72, but BIGWORDS’ default setting crawls all textbook vendors for purchase and rental and brings back the best choice — for each book. Below, it recommends renting all four for $165, with 76 percent savings, but there’s also a “Considered Buyback” tool that will show you the price you’ll pay after you sell the textbooks back, if you instead choose to buy them. (More on that below.) 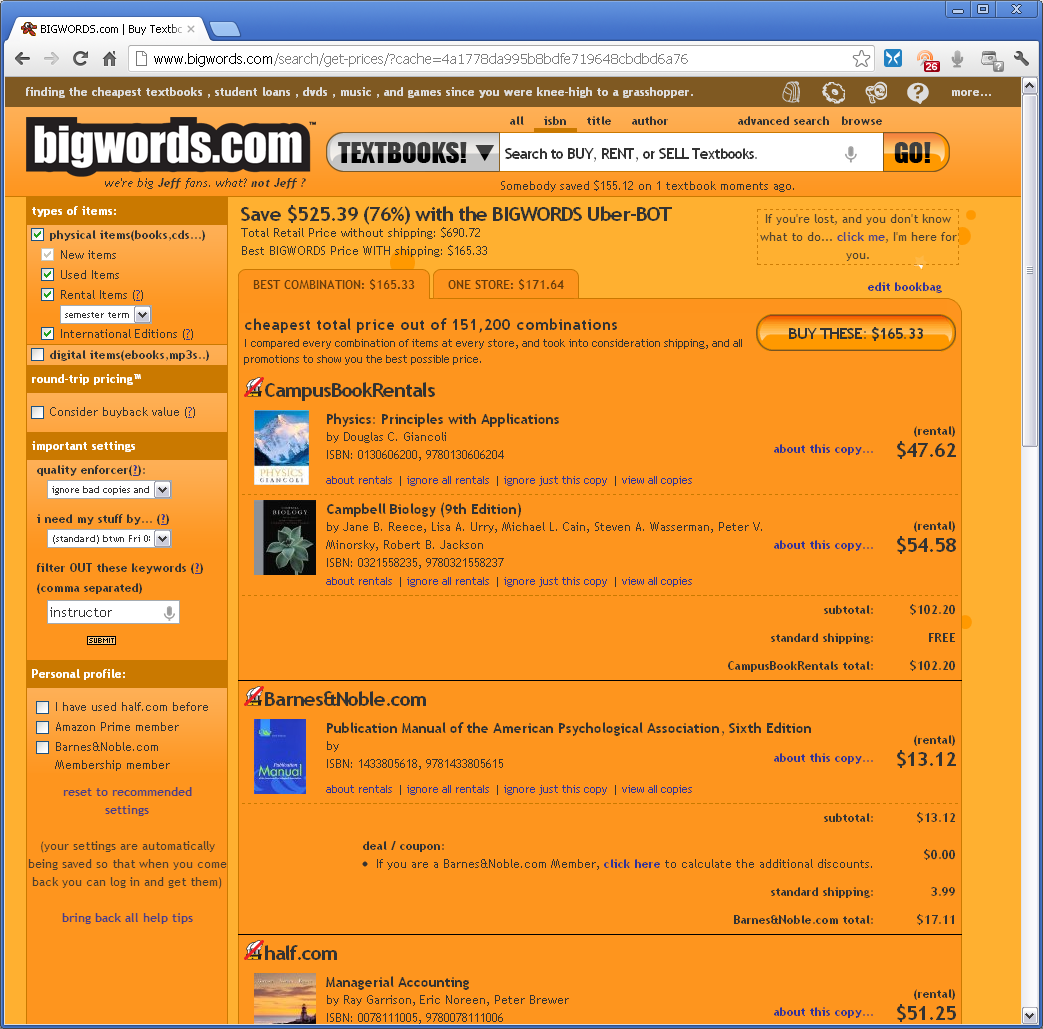 The company has contracts with each of its affiliate sites, searching and aggregating their inventories and serving them to the consumer. The student pays no extra money, prices are shown exactly as they appear on other sites, there’s no price hiking, and like Kayak’s lead-gen model, eBay (or whoever else) kicks the company a small commission when they deliver a sale.

While the industry is changing fast, moving to more interactive, gameified and mobile textbooks experiences, Sherwood says that it doesn’t matter to them how students are consuming, they will support those choices and find ways to give students the cheapest options. The site supports eTextbook rental and buying services, and Sherwood says they could care less whether or not students buy or rent their books. 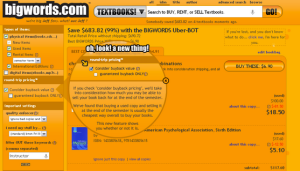 However, the company did run a survey of all the top sites in January and found that students ended up paying less in aggregate when they bought textbooks and sold them back, rather than renting them. So the company just launched a “Considered Buyback” tool, which users can turn on with each search. The tool takes the price of the used copies and subtracts how much they would be able to get for selling it back and compares that on each of its affiliate sites.

And so far, it seems to be working. The founder said that students, on average, spend $1,137 each year on textbooks, compared to average annual savings of $1K on BIGWORDS. That statistic alone, Sherwood says, is proof enough that the service is helping to alleviate a huge pain in the wallet for students.

The site doesn’t have the sexiest site design — in fact, it’s pretty hideous — but it does offer iPhone and Android apps for those looking to use the service on the go. So really it’s the utility that leaves an impression, not the award-wining design. BIGWORDS is operating in a niche market and it just doesn’t have the same value that an airline price comparison site like Kayak has in the big picture, but as long as it can stay platform and rental/purchase agnostic, it would be surprising if this site didn’t get another chance to take Amazon up on that acquisition offer.

High school and college students will always need textbooks, and whomever can find those cash-strapped studiers the cheapest option stands to become a valuable service — both in their eyes and in those of affiliates and investors.

More on BIGWORDS at home here.