It’s a busy day in the mobile payments world and it’s about to get busier: according to the New York Times, Braintree, the startup that powers the credit card payments systems of companies like OpenTable, Fab.com, AirBnB and Uber, just acquired Venmo, a social payments platform make and share payments your friends, for $26.2 million. Venmo’s investors include Accel Partners, Greycroft Partners, RRE Ventures, betaworks, Founder Collective, Dave Morin, Sam Lessin, Dustin Moskovitz,VaynerMedia and Lerer Ventures. The company raised a $1.2 million seed round in 2010 and a Series A round in August 2011. The service only opened its door to the public in March 2012 and has been growing quickly ever since. 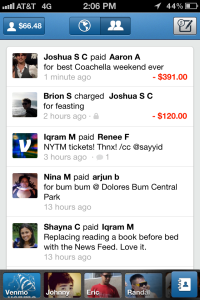 According to the New York Times’ Janna Wortham, Venmo’s team will continue to work from its New York offices and will not relocate to Braintree’s headquarters in Chicago. The Venmo will continue to develop its current service. Wortham also notes that Braintree CEO Bill Ready “hopes that Venmo’s established footing among the early adopter tech crowd will help foster its adoption and gain an edge against other payment processing start-ups, such as Stripe and Dashlane.”

Just a few weeks ago, Venmo launched its redesigned app with a focus on its new “news feed of payments.” At the time, Venmo co-founder Andrew Kortina told our own Josh Constine that he believed Venmo’s social approach to payments would “succeed where apps like Blippy that automatically shared your credit card charges failed” because the company’s focus is on payments to friends which “naturally involve a social experience.” That company says it is currently processing about $10 million every month.

Braintree itself raised about $34 million from Accel Partners in June 2011. At that time, Braintree founder Bryan Johnson noted that his company was “growing, profitable and bootstrapped.” By September 2011, Braintree was already processing about $8 million worth of transactions every day.