Remember when Google ruined its RSS news reader Google Reader by removing its built-in social features? Back in October, Google announced that it was removing Reader’s friending and following functions as well as its shared link blogs. For a niche crowd of heavy Google Reader users, this news came as a big blow. Like everything Google does these days, the changes came about because of Google+ – specifically, the idea being that Google needs a single social layer across all its products, not standalone communities like those that existed in Reader.

If you’ve been lamenting the loss ever since, there’s a new startup to keep your eye on: Feedspot. Basically, it’s Google Reader with social features and more. You’re welcome,  (niche RSS reading) world.

The current product is still in private alpha (see invites below), so be warned. According to founder Anuj Agarwal, the site is finally ready for a little tire-kicking after over eight months of  heads-down coding. Agarwal also notes that he was specifically inspired to create Feedspot following the TechCrunch post about Google Reader’s sad, sad makeover. (Really, even some of Google Reader’s original creators volunteered to fix the thing.)

“We want to make a perfect social feed reader by understanding exactly how users want it to be,” says Agarwal. “To do that, we are following Eric Ries’ Lean Startup model and are focused on shipping the first minimum viable product to users.” In other words, it’s not perfect, but it’s a start.

Also, to be clear, it’s not a Google Reader clone. If you’re just looking for the old Google Reader made new again, keep looking. Currently, the reader supports up to 5,000 RSS feeds, as well as topics (e.g.  Marissa Mayer, London Olympics) and feeds from your Twitter account. The topic-based feed approach may appeal to those who don’t care about following specific blogs or authors, but rather subject areas of interest. In other words, more mainstream users. However, RSS has failed to catch fire in the mainstream, and those who used “real” RSS feed readers tend to have a pretty specific idea about what feeds need to go in there. Thankfully, for this group, Feedspot has added OPML import. Google Reader exit strategy!

Like ye ol’ GReader, you can follow people, share articles and view your friends’ feed activity (a curated stream of their news). You can also consume the news via a Facebook app if you prefer. 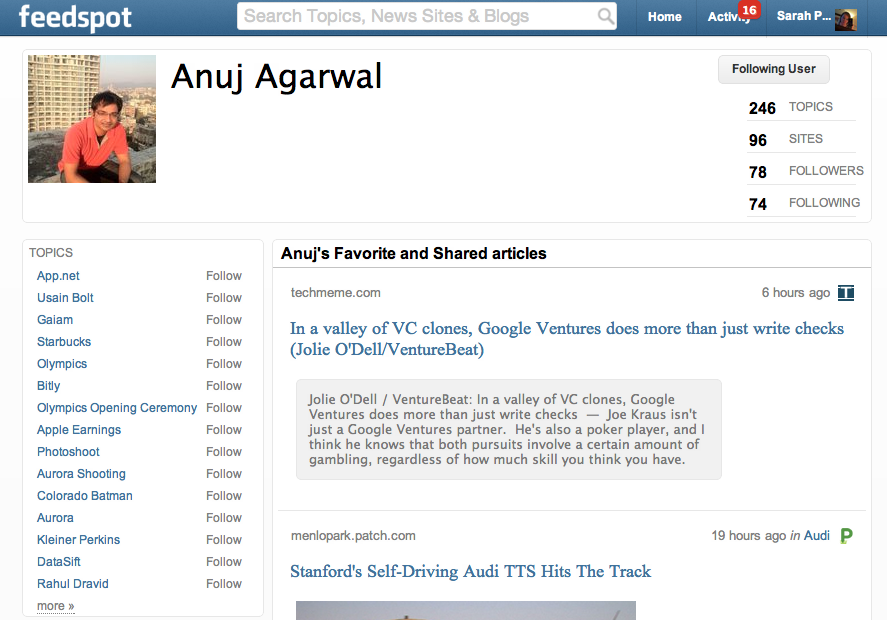 Now, not to get you all excited about where this could be headed, but Agarwal tells us that Feedspot has Ex-Yahoo VP of Consumer Internet products Dr. Larry Cornett on board as a Product or Design Advisor. Cornett previously worked at Apple, eBay and IBM. And, you know, if Marissa Mayer decided to take new Yahoo in the “product” direction, maybe there’s hope for RSS readers yet?

Despite the fact that RSS readers have been losing the fight in the mainstream, where they have long since been replaced with “getting the news from social streams” like Facebook and Twitter. Others prefer reading the news in magazine-style apps like Flipboard. But there are still some companies working on building RSS/news consumption tools for more hardcore users: Feedly, Wavii, Reeder for iOS and Mac does a good job with style, Betaworks just invested in Bloglovin, and YC-backed NewsBlur went back to the basics.

If you count yourself among the precious few who still care about RSS in all its geeky glory, then use the invite code TechCrunch to try Feedspot.