There’s no shortage of video discovery apps out there. There are some, like Showyou, which aim to usual social signals to tell you what videos are worth watching online; and there are others, like Fanhattan, which are designed to aggregate information across multiple video apps.

But few apps are focused on highlighting what’s actually happening right now, on TV. In part, that’s because TV is a hard nut to crack, and few startups are equipped to capture and make sense of what’s happening across hundreds of channels in real-time. That’s where Boxfish comes in. Boxfish wants to be that information engine for TV, letting viewers find out instantly what’s hot, and also alerting them when topics of interest come up.

Boxfish started with the problem of finding out what’s on TV. To do so, it hooked up a satellite dish to a data center and began processing captioning information that was being broadcast along with the video streams. That told the company what different people on TV were talking about, but it didn’t really help Boxfish understand what was important. So it applied some natural language processing and some unique algorithms to determine not only what’s trending — not surprisingly, there’s a lot of chatter about Paul Ryan and Mitt Romney lately — but relationships between subjects.

The company has been building on that technology since early last year, trying to find interesting use cases for it. At first it launched a real-time TV search engine online, letting users find out when and on what channels certain subjects were popping up. But the team found that users were doing searches and then bookmarking them, coming back later to check on them again and again. It also launched a Tweetdeck-like interface for keeping tabs on trending topics, as well as allowing users to create their own search topics inline — doing away with that bookmarking problem.

Now Boxfish has taken that all a step further — with the launch of an iPad app that will not only let users track and discover what’s happening on live TV, but will also help them tune to whatever channel as it’s happening. With the Boxfish Live Guide app, users can search for topics, set channel favorites, and get notifications when certain topics are mentioned on TV, and create custom feeds of their own. 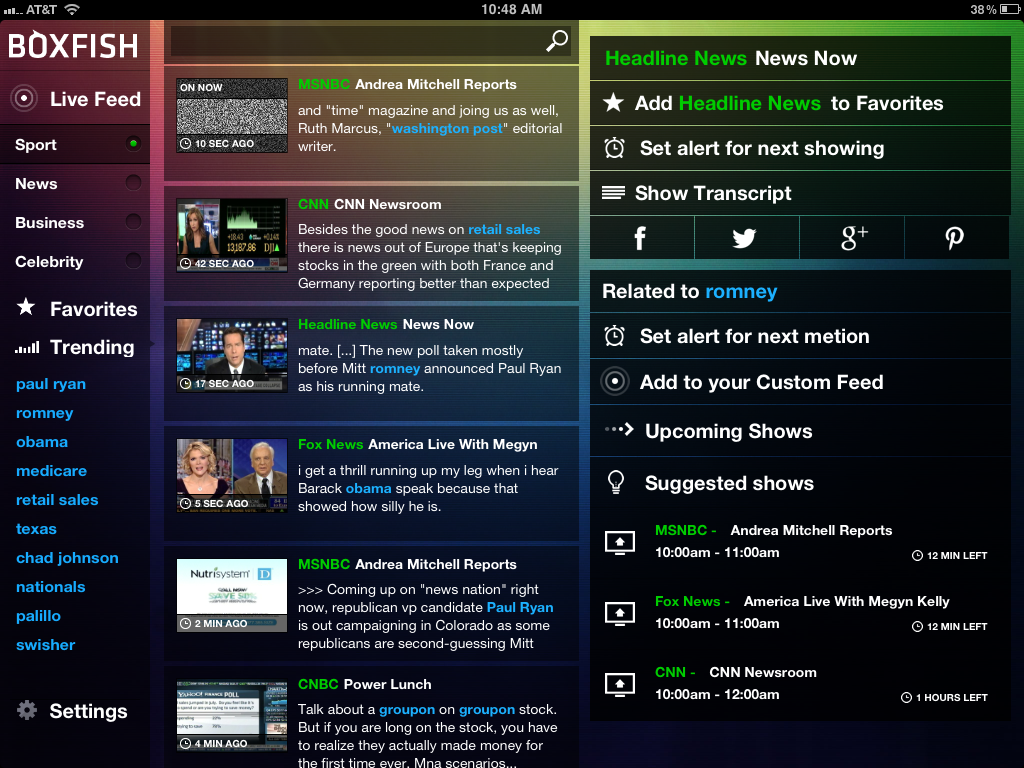 Since so much of what trends in real-time is focused around News, Sports, Business, and Entertainment channels, those feeds are front and center. But the ability to create your own alerts and feeds gives a lot of flexibility for users who have more diverse interests than the Presidential election or who won the Yankees game.

While many second-screen apps end up taking the viewer’s attention away from what’s happening on the TV, co-founder and CEO Eoin Dowling said Boxfish’s Live Video Guide is meant to drive them to watch more live TV. Today about 60 percent of viewing is pre-determined, but that still offers a big opportunity for Boxfish to offer up suggestions for times when viewers don’t yet know what they want to watch. Since so much of the guide happens in the moment, there’s an added bonus that viewers will check out channels that they might not have paid much attention to before.

One way it’s doing that is through set-top box integration that will let users control their TV with the app to switch channels and the like. Boxfish has partnered with DirecTV and TiVo to enable users to change channels directly from the app. That’ll give it access to about 25 million compatible set-tops at launch, and it’s working on integration with a number of other cable, satellite, and telco companies to enable channel switching as well.

Live is just the first offering, however, and Dowling said the company is also working to enable viewers to record video to their DVRs. So, for instance, if Boxfish alerts you that Kim Kardashian is on TV, but you’re at work, you’ll be able to make sure you can capture every moment her derriere is on-screen. The Boxfish team is also looking to expand to other devices, like the iPhone and Android phones and tablets.

Boxfish was founded by Dowling and CTO Kevin Burkitt in January 2011, both of whom worked together at Red Circle Technologies. Red Circle provided a platform for consumers to acquire mobile content, and was acquired by Zamano in 2008. Boxfish raised $3 million in a funding round led by T-Venture, the Venture Capital arm of Deutsche Telekom. The team now has ten employees, and is headquartered in Palo Alto.