Editor’s note: John Greathouse is a general partner at Rincon Venture Partners and has held a number of senior executive positions with successful startups during the past fifteen years, including Computer Motion, Citrix Online and CallWave which collectively created in excess of $350M in shareholder value. You can follow him @johngreathouse. You can also check his blog for emerging entrepreneurs here.

Successful Olympic athletes share a number of common qualities with entrepreneurs; including boundless energy, uncompromising tenacity and a willingness to innovate. Such innovations include new training routines, inventive diets and novel, gameplay tactics. Entrepreneurs are well served to pay particular attention to two of the most innovative Olympic athletes: Dick Fosbury and David Berkoff, the former of which I discuss in the following 2-minute video.

Not All Flops Are Failures

Dick Fosbury began experimenting with unconventional methods of high jumping as a high school sophomore. Rejecting the straddling approach, which had been the standard for the prior forty years, Dick tweaked the old-fashioned scissor kick, eventually morphing it into a new and unique approach. His controversial technique was eventually dubbed the “Fosbury Flop.”

The track and field community initially scorned Mr. Fosbury’s approach, labeling it “unsafe” and “too unorthodox” for the average athlete to master. However, after Fosbury set an Olympic record at the 1968 Mexico City games, jumping 7 feet 4.25 inches, track athletes the world over began to co-opt his approach.

The adoption of the Fosbury Flop was rapid. The last high jumper to set a world record using the straddling approach was Vladimir Yashchenko in 1977. As shown in the chart below The Fosbury Flop had become the international standard by the 1980 Olympics.

Inventors generally rely on new solutions, while innovators prefer modifying existing solutions. However, at most startups, competitive advantages are derived from a combination of invention and innovation, as described more fully in Inventor Or Innovator – Which Are You?

Harvard Professor Michael Porter notes in, “What Is Strategy?”, that entrepreneurs should strive to create a sustainable competitive advantage by “…performing different activities from rivals’ or performing similar activities in different ways” (italics from original text). This is in contrast to the approach taken by most big companies, which often focuses on outperforming the same activities conducted by their rivals. Such innovations represent an opportunity to create a sustainable advantage, at least in the near-term, by changing the rules of the game and executing a pre-existing activity in a new way.

Startups often out-maneuver their larger rivals by changing thekey parameters upon which competition has historically been based. Rather than trying to do the same things better than their competitors, savvy entrepreneurs identify new ways to create and deliver value to their customers, which often result in sustainable competitive advantages. 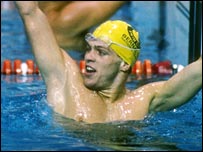 Fosbury is not alone in his role as an innovative Olympian. Although less renowned than Mr. Fosbury, David Berkoff revolutionized the world of swimming by refining a technique whose origins date back to the 1920s – the dolphin kick.

In the late 1980s, Mr. Berkoff began consistently winning races by dolphin-kicking underwater at the start of each race and after each flip turn, for as much as 35 meters at a time. He quickly went from being a mediocre collegiate swimmer to a world-class champion, winning four Olympic medals in 1988. Not surprisingly, given the media’s love of alliteration, his technique was termed the “Berkoff Blastoff.”

Looking back on his swimming legacy, Mr. Berkoff confessed, “I probably wouldn’t have made the Olympic team [without the Blastoff]. I probably would have been a good backstroker but not a great one. It was something that really kind of changed the way backstroke was swum.”

Berkoff’s initial impact was limited to his specialty, the backstroke. However, other competitors soon began utilizing his technique, which caused the International Amateur Swimming Federation to institute a rule precluding underwater swimming beyond 10-meters from the pool walls (later relaxed to 15-meters). The official reason given for this rule change was, “the safety of the athletes.”

However, most fans of competitive swimming agree that the real reason for the ruling was the officials’ concern that extensive use of the dolphin kick would migrate from backstroke races to breast and butterfly events. Thus, an otherwise non-competitive swimmer could conceivably defeat world-class champions by dolphin kicking the majority of the pool’s length. They also feared that competitive swimming would largely become an underwater affair, which would diminish the sport’s appeal to mainstream, television audiences.

The controversy surrounding Berkoff’s approach has not abated. Earlier this week, South African swimmer Cameron van der Burgh bragged about using the stroke to win a gold medal. Cameron rationalized his illicit use of the kick to the Sydney Morning Herald, stating, “Everybody does it—well, if not everybody, 99 percent of them. If you’re not doing it, you are falling behind and giving yourself a disadvantage.”

An entrepreneur’s ability to devise innovations increases exponentially once they enter the market and are forced to fight for their venture’s survival. Both Fosbury and Berkoff devised their innovations while immersed in their sport. They did not study the art of jumping or swimming in an attempt to create ideal methodologies. Rather, they activity experimented, with a singular focus on creating new techniques within their mature sports.

According to Mr. Fosbury, “It was not by design at all. It was just simply intuition. It was not based on science or analysis or thought or design. It was all by instinct. It happened one day at a competition. My mind was driving my body to work out the best way to get over the bar.”

As Mr. Berkoff later noted, “It seemed pretty obvious to me that kicking underwater seemed to be a lot faster than swimming on the surface.” It may have seemed obvious in retrospect, but it is worthwhile to note that Mr. Berkoff leveraged the undulating dolphin kick, despite the fact that it had been previously attempted and subsequently abandoned by competitive swimmers nearly 90-years earlier.

Four and two decades later, respectively, the Fosbury Flop and the Berkoff Blastoff are universally accepted as standard methodologies. However, standards never last forever. Even as you read this, there are innovative athletes and entrepreneurs who are devising competitive advantages that will change the rules of the game.