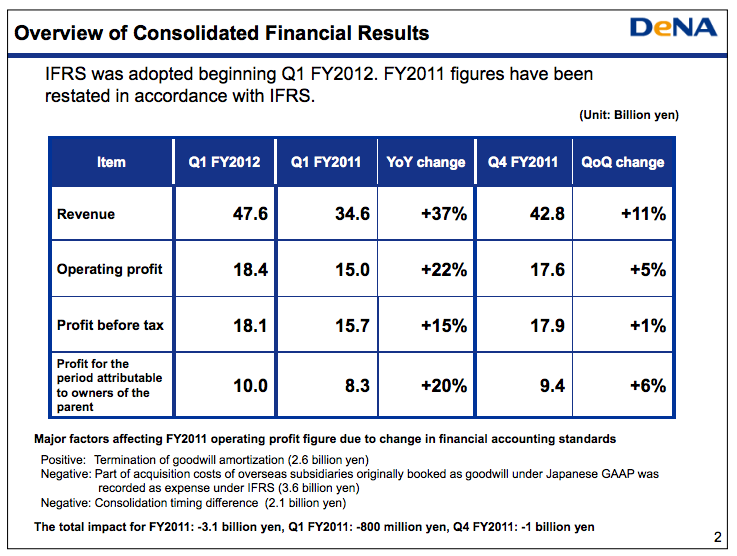 At least for the time being, Japan’s multibillion dollar gaming giant DeNA appears to be unaffected by the government’s recent inquiry into ‘gacha’ gaming mechanics. Profits were up 20 percent year-over-year to 10 billion yen ($127.3 million), and rose 6 percent quarter-over-quarter. Overall revenue was up 37 percent to $605.9 million.

Japanese gaming companies have faced some headwinds in the early part of this year as the country’s consumer affairs agency cracked down on a gambling or ‘wishing well’-like gaming mechanic called kompu gacha that randomly awards players prizes (kind of like a slot machine). The biggest mobile gaming companies in the country like DeNA and GREE have stepped back from using them, which has put downward pressure on their share prices. DeNA removed these mechanics from its games in May (or two months into the quarter). The company said that increased spending on virtual currency offset the loss of these mechanics, although we’ll only see the real effects perhaps in the next quarter.

“There was some concern in the investor community that it would have a pretty dramatic impact on sales and the good news for us is that it didn’t really have the type of impact that was feared,” said Neil Young, a director at DeNA and the CEO of Ngmoco, the mobile-gaming network the company acquired in 2010 for up to $403 million.

In another promising bit of news, DeNA said that it saw $10 million in Moba-coin consumption in July from the Western-facing side of its mobile gaming platform Mobage. In an effort to keep growing beyond their relatively saturated home markets of Japan, both DeNA and GREE have made an aggressive push toward luring in Western audiences with splashy acquisitions of U.S.-gaming startups like Ngmoco, OpenFeint and Funzio. Young said the Western facing side of the Mobage platform now has 45 million registered users, although he didn’t share daily or monthly actives. Zynga has at least 33 million daily active users on mobile.

Fueling that growth in Western revenues was a trading card title called Rage of Bahamut, which sat on Google Play’s top-grossing charts for 17 weeks. Some other mid or hard-core titles like Blood Brothers are also attracted average revenue per daily active users of about $1.

DeNA’s shares rose22 percent on the news to 2,160 yen, giving the company a market capitalization of $4.04 billion. Like Zynga and every other contemporary, freemium gaming counterpart DeNA has, everyone’s valuations are down significantly from the beginning of the year. DeNA shares are down only 21.6 percent from the beginning of the year, however. DeNA said for the next quarter it expects to see revenue up by 40 percent year-over-year to $1.24 billion and profit up by a similar ratio to $272.4 million.

“The challenge for us is to prove to the investor community that our market cap has not been limited by speculation on the Japanese market,” Young said.

He added, “To be successful, gaming companies need to be 1) global 2) prove they can monetize and 3) be on mobile. DeNA is well-positioned in that regard.” 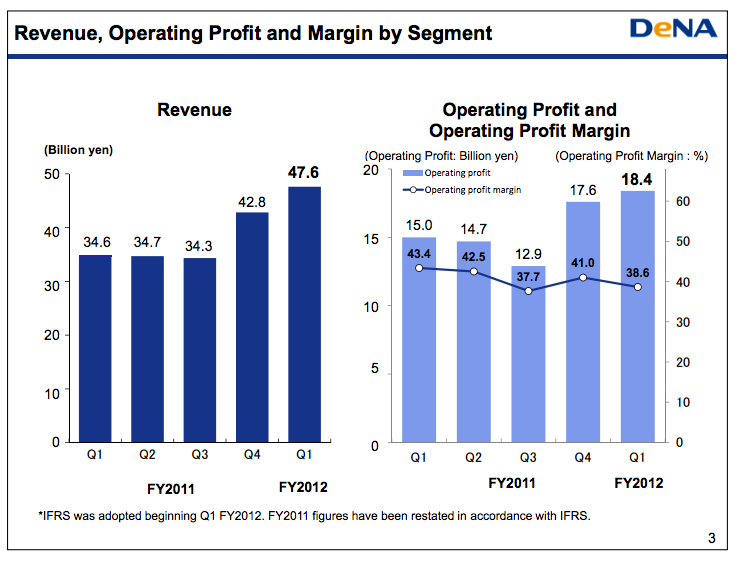 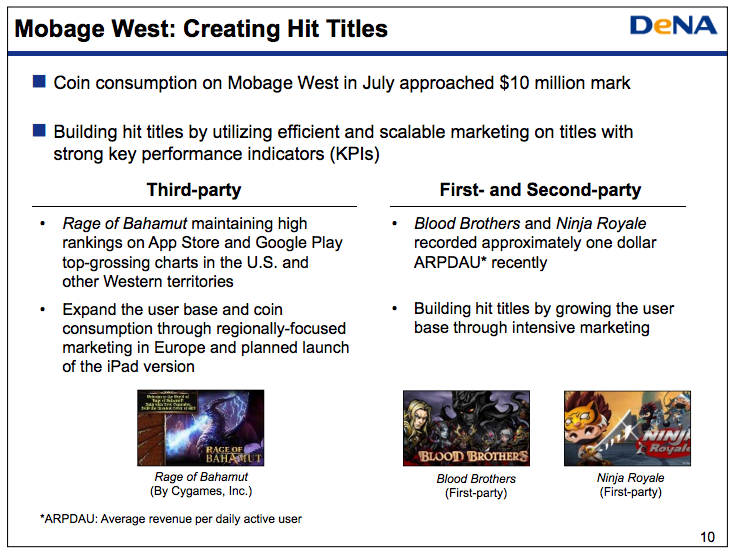