There are a bunch of companies promising to help businesses get a better understanding of user activity by recording visitor sessions (most recently we’ve covered services like userVOD and Delight.io, which are trying to bring this technology to mobile). Now a Polish startup called Use It Better has launched a user recording and analytics service that’s focused on games.

Founder Lukasz Twardowski says that games present unique challenges for developers wanting to record player activity. For one thing, if you’ve got a successful game, you’re dealing with a big audience, and the session times can stretch into the hours, so it’s pretty much impossible to watch more than a couple of recordings. You’re also trying to track a pretty broad range of behavior — not just where people are scrolling and clicking.

To avoid this problem, Use It Better isn’t just recording a video, but also creating a text log listing moves and other relevant player activity. That should make it easier to quickly skim a session for relevant information, rather than watching it in real-time. That also makes it easier to aggregate all the data — you could bring up a chart summarizing user activity in your game, then see that everyone seems to be quitting or getting lost at a specific point. Then you can bring up the session recordings (and corresponding text logs) to see exactly where people are going wrong.

Other features include a heat map showing behavioral patterns in the game, data about user demographics and satisfaction, as well as real-time analytics that can alert you as player activity is changing.

Use It Better only recently entered public beta, but during its private testing period, it already signed up a number of game companies as customers, including Kabam, Peak Games, Lolapps, One2Tribe, and The Broth. For now, the public product only works for browser-based Flash games, but Twardowski says Use It Better has also developed an HTML5 version that would work for mobile games, and it’s testing that version with a limited group of customers.

Looking ahead, Twardowski says Use It Better could also help developers acquire users. After all, it’s gathering a lot of data about which users are playing which games, so it can help developers identify which audience will respond best to their games, and then to target their advertising accordingly. 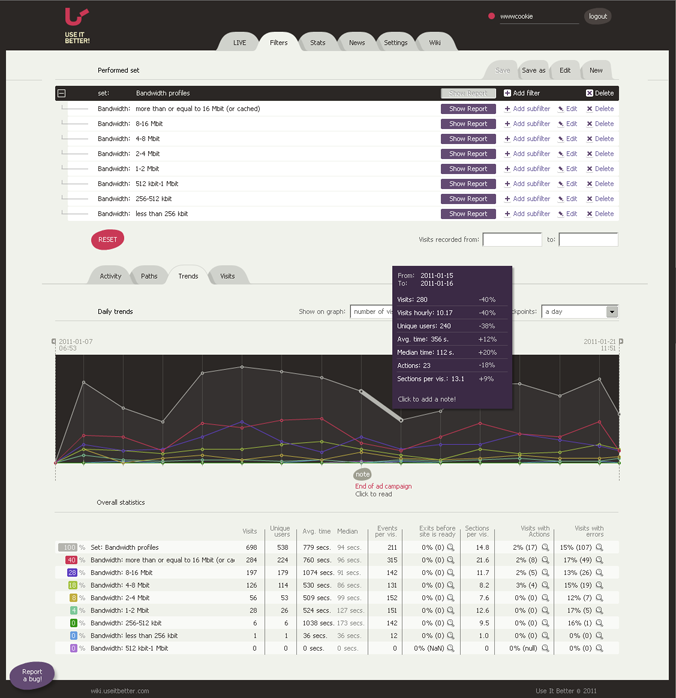