After the team at social travel startup Tripl had a change of heart last month, they eventually came to a weighty conclusion — now that their focus had shifted away from connecting travelers with friends that happened to be nearby, they had to redo the iOS app they had been working on for months. Now, just a few weeks later, Tripl has pushed that new (and free) iOS app out into the wild for users to muck around with.

In case you aren’t yet familiar with the new Tripl, the service is all about giving users a glimpse into where their friends are at any given moment by pulling in photos and check-ins from Facebook and other social networks — quite a treat when you’re usually cooped up indoors for most of the day like me.

The onboarding process does require a bit of patience — users are asked to log in with Facebook credentials, and the app starts scouring social connections to pull in information about friends’ travel plans. Add to that the ability to connect Tripl with Foursquare, Instagram and Tripit, and you’ve got a decent wait (mine was about 15 minutes) on your hands. Thankfully, the app prompts you to enable push notifications from so it can holler when the process has finally been completed.

Once all that initial housekeeping is done though, Tripl becomes a real treat to play with. Users are greeted with a streamlined view of their friends’ locations, and popping into individual entries (Tripl calls them “stories”) allows users to see a stream of photos taken from a particular location. From there, the truly interested can also “love” the story, leave jealous comments, and bookmark locations that seem worth checking out down the line. 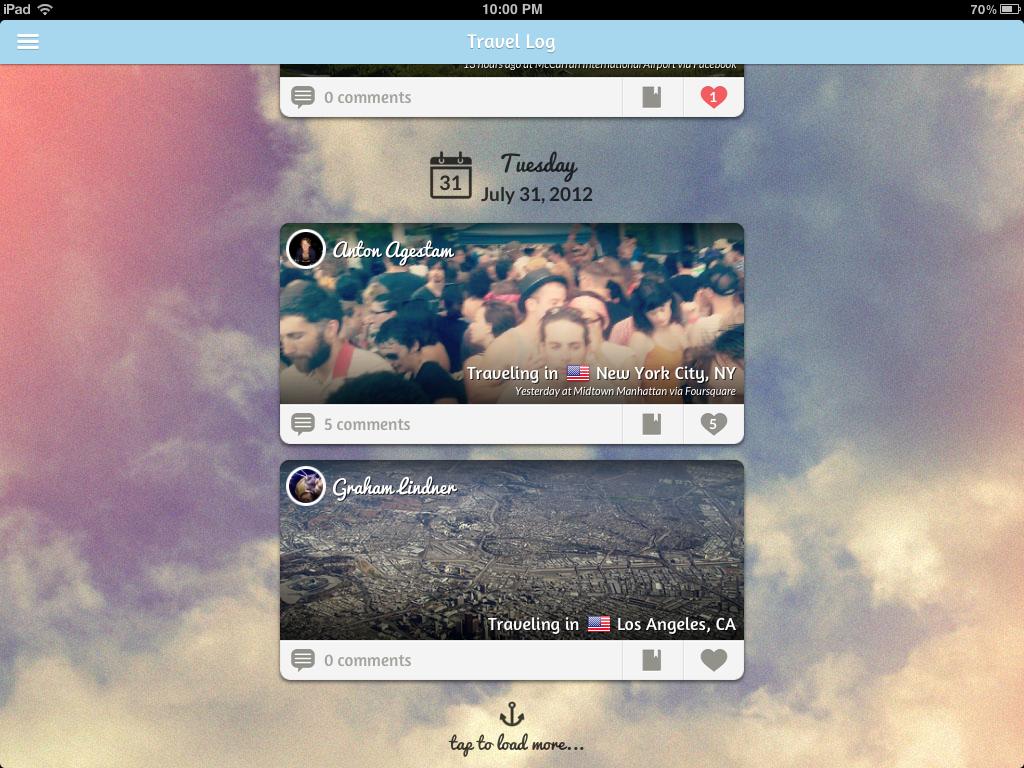 In the event that someone just checks in to a location without a photo to accompany it, the app defaults to plotting the place on a map to provide a bit of geographical context. It’s rather handsome to boot, which isn’t much of a shock considering the whimsical aesthetic that permeates the service’s web app, and thoughtful little touches like a distance indicator to show you how far friends are from home round out the package. If anything, the image-heavy app looks even better on an iPad (see above) thanks to all that additional screen real estate.

The app has its flaws for sure — there’s no way to view all of a friend’s travel stories in a list, nor can users look a list of potential vacation spots they’ve bookmarked. That said, those missteps seem like the sort of things that are easily remedied by an future update, and they don’t detract from the fact that this is an impressive first release considering Tripl’s recent pivot.