Until now, every Facebook mobile ad had to be triggered by you or a friend’s activity, but today Facebook begins testing a new non-social ad unit that lets developers buy mobile news feed ads that open Android and iOS App Store purchase pages when clicked. They’re designed to help developers grow their business. The ads are cost per click, not cost per install-based, however Facebook tells me it hopes to let devs measure installs driven by their app ads in the future, and is now taking developer signups for the currently small private beta.

By opening up the mobile news feed to traditional, non-social ads, Facebook may please its investors but will have to be very careful about how often these promotions appear to make sure they don’t drown out organic content and cause us to stick our phones right back in our pockets.

Facebook mobile app ads appear in a “Try These Games” panel in between traditional stories on the mobile news feed. The panel shows the name, thumbnail image, and number of friends playing (if any) of a few app (three in the example we’ve received).

Organic and paid entries into the panel can appear side-by-side, with ads marked “sponsored”. Clicking through opens an app’s native iOS App Store application or Google Play application on your phone or tablet. 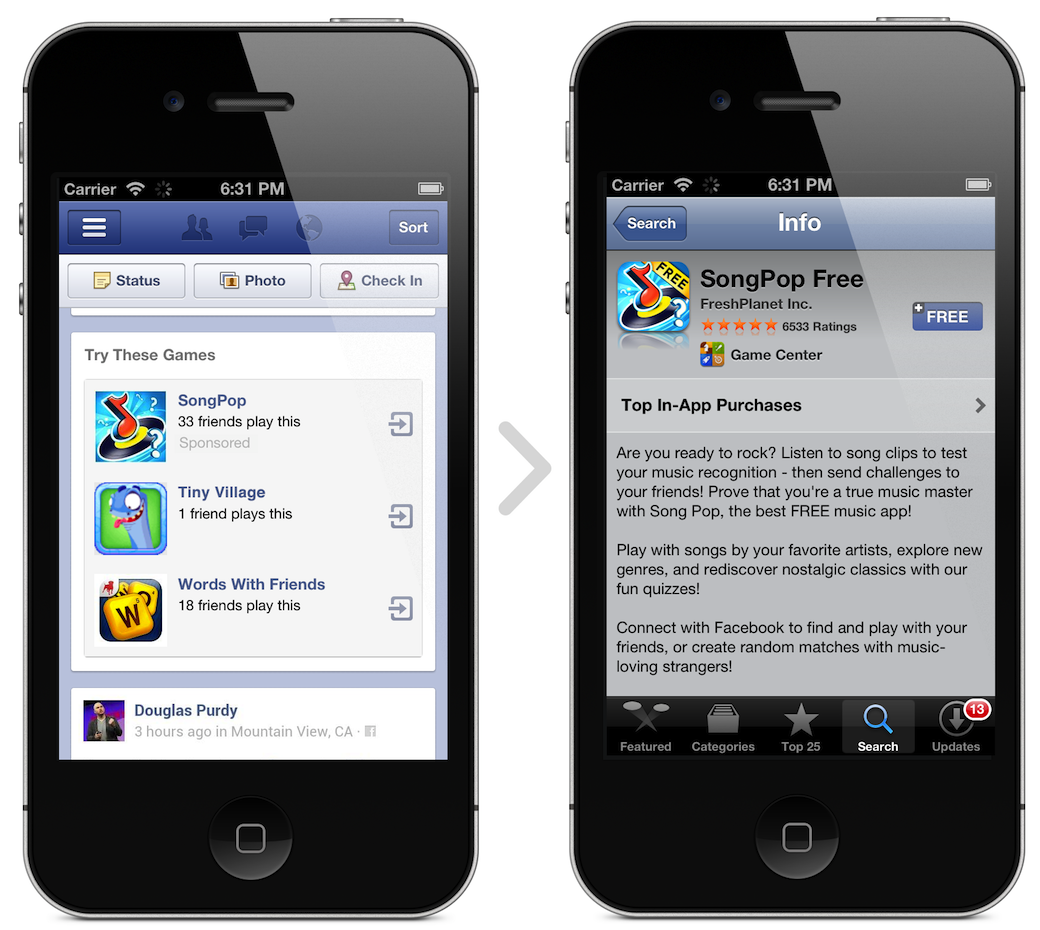 Facebook mobile ad reach, clicks, frequency, and spend can be tracked through a dashboard, and the ads can take advantage of all of Facebook’s biographical, interest, and device targeting options. This makes them much more flexible than Sponsored Stories, which advertisers could only target to friends of people who had already mentioned their brand or used their app.

That means developers won’t need an existing user base to advertise their apps, and they can be employed to promote game launches — currently a huge source of developer ad spend on Facebook’s website.

For example, ads for an new iOS-only girl’s fashion game could be targeted to iOS device-carrying females 16 to 45 years old, living in Los Angeles to maximize the relevance. 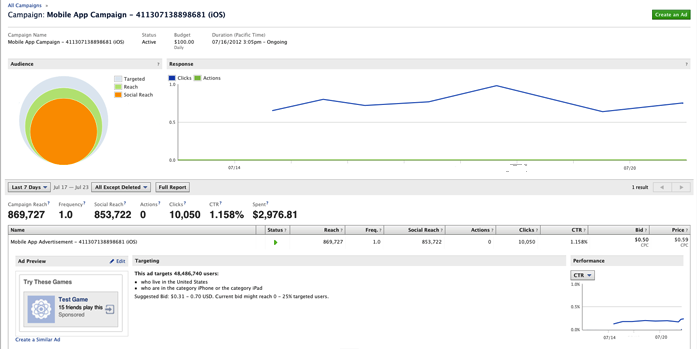 Wall Street should be excited to see Facebook getting more aggressive about mobile monetization. But the fact that these are straight-up ads, not stories about friends that businesses pay to appear more frequently, brings Facebook into murky waters on mobile. It’s previously relied on the idea that its social ads are content to justify their injection into the news feed.

Facebook showed caution, telling me “We don’t want to show too much sponsored content because that would be the wrong experience for news feed” and that it will be watching everyone’s reaction to figure out how often to show the mobile app ads. It’s a little worrisome that Facebook told me, “it’s hard to say if there’s going to be a frequency limit” to how often mobile app ads appear because it’s still testing in limited beta and it’s unclear how many ads there will be.

When Facebook first rolled out Sponsored Stories to the mobile news feed it was aiming to limit them to one per user per day, but later expanded past that as data showed they weren’t that obtrusive. On stage at our Facebook Ecosystem CrunchUp last week, Facebook’s director of engineering for ads Greg Badros told me Facebook shows Sponsored Stories more often to those that click them, and that could end up the case with mobile app ads too.

My own informal snapshot study saw Facebook injecting one add per ~125 stories on mobile, and I think users could withstand around 3X that many. Since this is a closed beta, we have to expand the test to see what makes sense, but we’re committed to keeping news feed interesting and relevant.

Facebook will be testing and we’ll be watching to make sure users don’t balk at a feed originally for friends’ photos and status updates that’s been diluted with paid ads for random games. If Facebook mobile app ads prove to be a cost-effective way to drive installs, and popular enough that it can show them frequently, they could pull spend away from mobile banners and in-app ad networks.

Philosophically, though, today is big moment for Facebook’s business. It’s finally entrusting the relevance of the news feed to the targeting skills of advertisers, not just the wisdom of the social graph.