Editor’s note: Gentry Underwood is a software designer and entrepreneur who co-founded Orchestra, Bring a Trailer, and formerly led the Knowledge Sharing domain at IDEO. You can find him on Twitter at @gentry.

Let’s start with the obvious: if you’re reading this post you’re already well-aware of the breakneck pace of technological innovation that has defined the last 30 years of human development. We can probably skip the refreshers on Moore’s law or the platitudes about innovation happening faster and faster. This is a story we’ve all heard. This is a story we know by heart.

And yet, the way we tell this story can have a big effect on how prepared we are for what comes next. Spin it one way and the singularity is near. Spin it another and technology itself is organic and alive. Or perhaps our best days are behind us.

The stories we tell ourselves shape the way we see the world – they shape what we look for. In that spirit, I’d like to argue that over the past 30 years of technological innovation there are really only 3 moments — 3 movements – that have truly been evolutionary leaps of the fish-develops-lungs variety. Each of these leaps has increased human capacity in paradigm-shifting ways. And each one has ushered in a bountiful era of supportive innovation, creating entire new industries, minting millionaires and billionaires, and giving us new modern heroes. These are the moments that matter most – the inflection points in human history — and what makes this particular time in history special is that we’re smack-dab in the middle of the third movement. 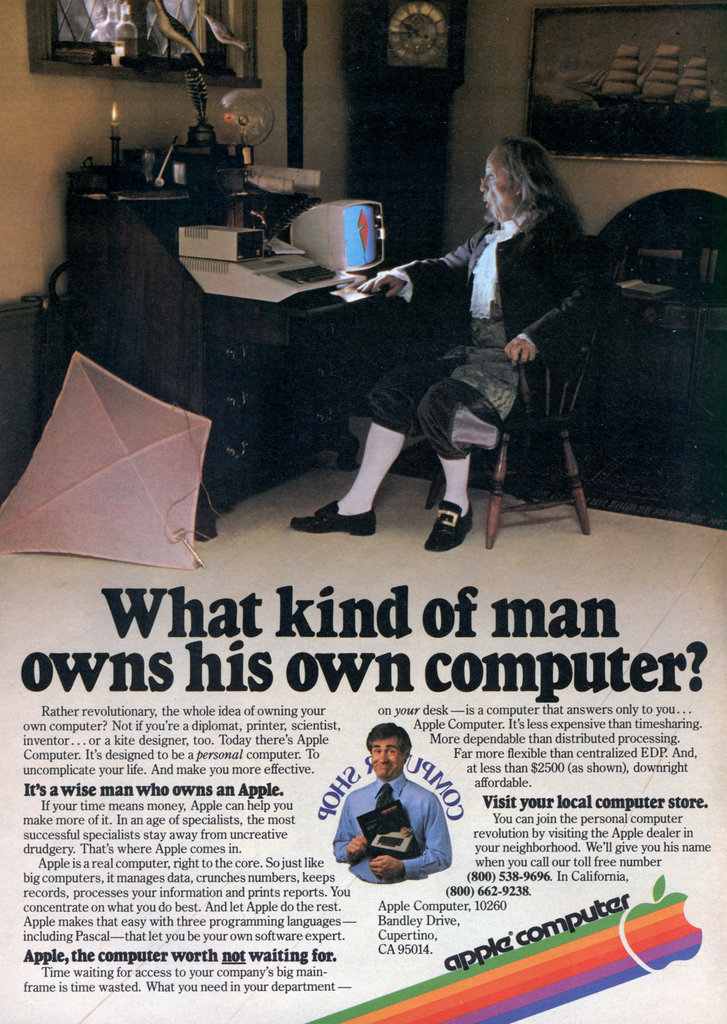 The first evolutionary leap was the personal computer. IBM, Apple, Atari, Microsoft, Tandy, and a zillion other less-succesful players that our collective memory has mostly forgotten. This was the era where, for the first time, the theorietical power computers could bring us (think number-crunching, word processing, photo editing, and gaming) became accessible in a standalone device small enough to put on a desk and affordable enough that small businesses and individual consumers could buy one.

This first movement brought with it massive innovations, not only in the miniaturization of computers themselves, but also in interaction design and software development. Personal computing created an enormous market, and with it demand for better and better tools. Lotus 123. WordPerfect. Photoshop. Pagemaker.

And as the tools themselves evolved, so too the operating systems in which they lived — from command-line systems like DOS and UNIX to graphical user interfaces like Mac OS, OS/2, and Microsoft Windows. This was the era that gave us the mouse, color CRT displays, and early laptops with LCD screens. This was the era where many people assembled their own PCs and everyone talked about faster processors (remember Intel’s massive jump from the 386 to the 486, their lawsuit to try to “own” that number, and “Pentium” when Intel lost?). More RAM was a big deal. A 400MB hard drive was mind-bending. 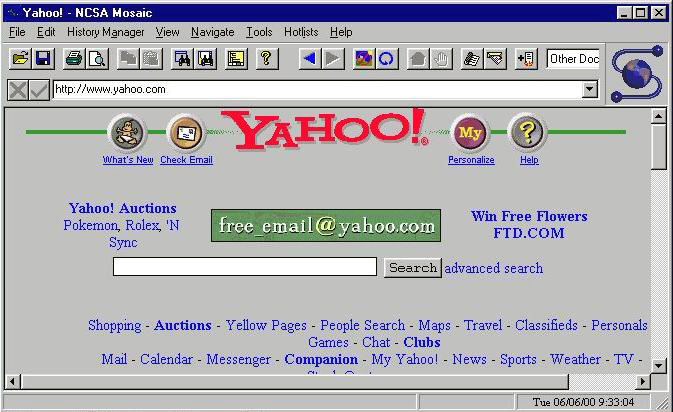 During the 1990’s, while personal computer specs were still evolving, a new paradigm shift began: the era of the network. A critical mass of millions and millions of computers, spread throughout the world, started getting physically connected to one another, not only in small private networks (at corporations and universities) but also through something called the Internet. Our world has been so transformed by this movement that talk of the Internet now feels trite, and it’s hard to remember how weird the idea first seemed to most people:

Whereas in the first era the innovation centered around better and better tool creation (bicycles for our minds) the movement of the network opened new landscapes of innovation around communication, primary of the many-to-many, asynchronous variety. Hollywood, TV, and radio had long-since mastered the one-to-many broadcast, and our telephones had already made it possible for us to reach out and touch anyone, but through the internet anyone (person or business) could now become their own broadcaster, open their own storefront, or converse with others without having to be in the same place or the same time.

Synchronous communication saw innovation as well (most notably instant messaging and video chat), but the real game-changing shifts came from email (which continues to be the primary communication platform for our world) and the world wide web.

Some have called the web the greatest invention of all time. No one can dispute the massive wealth and human capability it has enabled, through household names like Yahoo, Google, Amazon, Facebook, and YouTube. 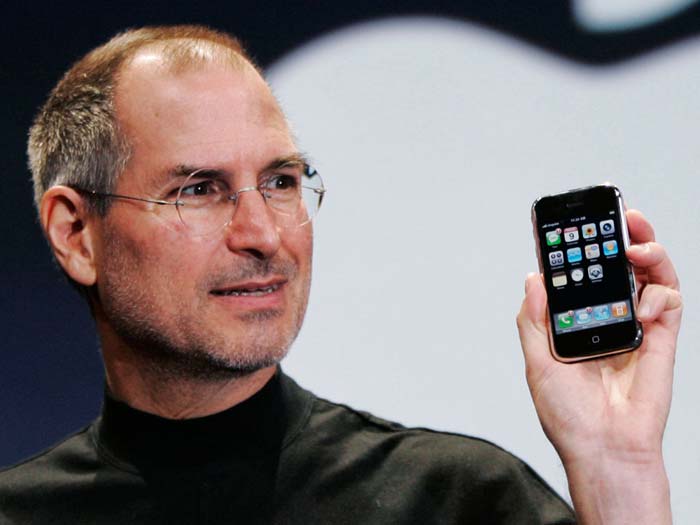 And now the third era is upon us. It began with RIM and Nokia, but really only took off when Steve Jobs introduced the iPhone. This is the era of “smartphones” — networked computers so small that we keep them with us at all times.

Again this seems kind of obvious. We all know that the iPhone and the Android devices that followed it have taken the world by storm, devastating existing mobile businesses and selling in numbers that simply boggle the mind (In 2011 Apple sold more devices running iOS than all the Macs it had sold in its 28-year history). This is a massive tidal wave. This is the story of our era. And yet it can be hard to get our heads around the implications.

What the Third Movement means for us

As an entrepreneur, I’m sometimes shocked to see fellow entrepreneurs who are searching for product-market fit by building something intended mainly to be used on the web via a PC. While there are still opportunities to create desktop-based tools and services, they’re missing some of the greatest market opportunities in human history. The next round of giants — the Microsoft or Google or Amazon or Facebook of this era, will be the companies that are focused on making use of the computers in our pockets.

Many screens, one experience

By now most everyone knows that mobile network traffic is growing at a breakneck pace and in some parts of the world already surpassing desktop traffic. This is a trend that will obviously continue. 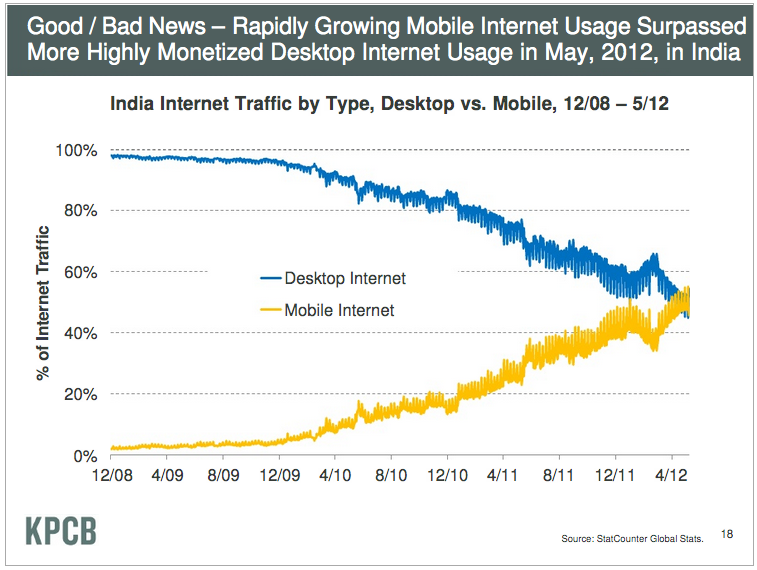 What isn’t quite as clear is what that means for the products and services we create. To say that mobile devices replace desktop ones isn’t quite right. Rather, the services of the future (and increasingly of the present) are expected to make themselves available in full functionality on every platform. Users expect their data to live in the cloud and be accessible from everywhere. This can increase technology complexity dramatically (invisible, magical sync that just works, though often a massive technological challenge, becomes the expectation) even as it simplifies the overall user experience (my information is available everywhere, anytime). Dropbox and Fab are great examples of a multi-device experience done right.

Design is more important than ever

When we sit at a desk in front of a computer, we effectively put ourselves in its world. And when we do that we can be remarkably patient in putting up with its idiosyncrasies. Oodles of buttons on our keyboards are no problem. Mice, with their bizarre 2-dimentional movement mapping to a cursor on the screen are second nature. When it takes us a while to navigate a menu of options, we can usually put up with it.

Not so with smartphones. Unlike their big brothers, these little guys are guests in our world, and we can get extremely impatient when our experiences with them aren’t perfect. After all, when out and about we’ve got people to see, places to go, and things to do. We don’t have time to stop whatever we’re doing and work our way through bad software. Great apps help us do all of those things more effectively. Poorly designed apps just get in the way.

This problem is magnified by the fact that it’s hard to design for mobile. The screens are tiny. Data pipes can be small, and processors are relatively weak compared to full-sized computers. For these reasons, smart product designers know to start with mobile and only move their designs to the desktop once the tougher platform has been nailed.

The servant at your side

Perhaps the biggest change of all, however, is the way that smartphones open up new service-based interaction models. In addition to mobile-sized bicycles for the mind and on-the-go communication, smartphones can also sit quietly in our pockets, waiting for just the right moment to tell us that something needs to be done. Highlight alerts us when someone interesting is nearby. Siri reminds us to pick up the dry-cleaning. These are not just clever new interactions — they’re the front edge of a new era of software design — one where trusted services accompany you through life and have the right to interrupt you, making suggestions about something you should know or do right now.

This is a wide-open field, and like the eras before it the design challenges are nuanced. Successful services must be trustworthy or we’ll stop paying attention, and they have to have my interests in mind above all else (imagine the hell of a GPS navigator that keeps trying to direct you to the nearest Starbucks because “it’s time for coffee”). But the best services will have unprecedented access to our world and the privilege of shaping our experiences like never before. Trusted services will change our lives, and we’ll love them for it.

A world of opportunity

I don’t know about you, but I find living in the middle of this third movement to be extremely exciting. There is so much opportunity to create products and services that impact our lives in meaningful ways. Personally, I can’t wait to see the smartphone-enabled services of tomorrow that we’ll come to take for granted — the ones that will become as second-nature to our lives as the internet or the PC.

It’s an amazing time to be alive.