HTC has posted its Q2 numbers and they’re not pretty. While numbers were up on Q1, the Taiwanese Android/Windows Phone smartphone maker saw declines in nearly every line of earnings compared to the same quarter a year ago. Revenues were 91.04 billion Taiwan dollars ($3 billion), down nearly 27% on Q2 2011 (and missing consensus analyst expectations); gross profit was down by more than 30% to NT24.59 billion ($819 million); operating profit down by over 57% to NT8.2 billion ($273 million). Earnings per share were also down by nearly 57% to NT8.9 ($0.30) per share.

HTC also provided a sober look at the quarter ahead. It expects that in Q3 revenues will drop even further to NT$70-80 billion ($2.3-2.7 billion), with the gross margin also dropping down to 25%, and the operating margin also coming down to 7%.

The results show that despite gains in some key markets like China (and a slight one in the U.S.), HTC continues to see huge competitive pressure in the smartphone segment in which it competes. This year, in an effort to better focus the company, HTC launched a line of handsets under the brand “HTC One”, which followed a similar convention to Apple with its streamlined iPhone line-up.

In its short earnings statement (which will likely see more elaboration during the conference call later today at 8AM Eastern time) HTC also emphasized its success in China, noting it was “well positioned to become a key growth driver.” Just as Canalys noted yesterday, the company highlighted operator partnerships as a key part of the equation, along with brand awareness and increasing retail presence.

Overall HTC said Asia was meeting expectations for the launch of the One line. But noticeably the key North American and European markets did not get mentioned in that context. Instead, these have been seeing “increasing marketing and sales efforts in North America & EMEA.”

Based on comments from April (via Slashgear), when HTC’s CEO Peter Chou was frank about how hard it would be for the company to claw back lost market share in the U.S. (where it currently accounts for only 6.4% of all smartphone users, says comScore), HTC may have already given up the ghost on this one.

But if it is still holding out for a recovery, HTC will have to spend even more (read: more margin/profit pressures) to try to make better headway in these two markets, where it once commanded a respectable presence but has more recently been hit hard by competition, partly from Apple, but also from other Android players, primarily from Samsung.

HTC, like Samsung, makes smartphones based mainly on Google’s Android operating system, with a secondary line based on Microsoft’s Windows Phone OS. But despite being a very early mover in smartphones — it was Microsoft’s first handset partner for its smartphone forays, and Google’s first Android handset maker — HTC has not managed to hold on to its lead.

Unlike Samsung, HTC focuses only on smartphones (and, increasingly, a streamlined lineup of models). That means that HTC offers a less diversified range to the market, and that makes it more susceptible to feeling a pinch when its main/only line of business is not performing that well. While feature phones are getting gradually replaced by smartphones in the overall market, there is still a strong business to be had in the lower end models, as both Samsung and Nokia have shown. And it also provides a customer base loyal to a brand that can be tapped for upgrades. (Apple has been the one standout in the market that seems to have bucked this trend.) 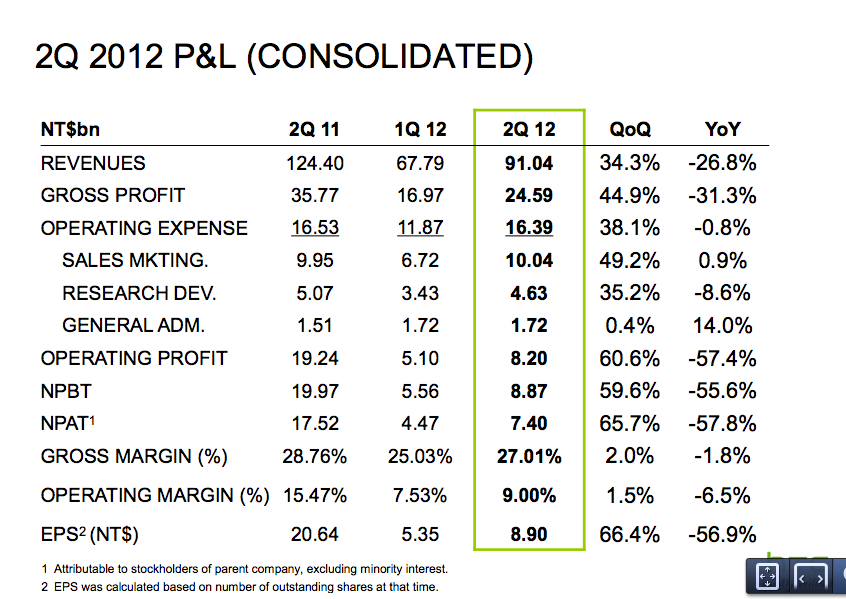 More to come. Refresh for updates.