Facebook is still huge and growing — it added another 50 million users this past quarter, and it’s about to break the one-billion-humans mark. But it still has to figure out how to survive on mobile. So we’re focusing on Facebook and its developer ecosystem at our annual CrunchUp event this Friday in Redwood City, Calif.

Our aim is to detail what’s working and what’s not, so entrepreneurs can better strategize how to think about Facebook when building their companies.

Get your Facebook Ecosystem CrunchUp tickets now! They can be found here.

Some mobile-savvy startups are getting big growth from Facebook’s platform. One of them is the music game SongPop. It now has more than 2.7 million daily active users and 11.4 million monthly active users via Facebook, and it’s also a top free app in the Apple App Store. I’ll be trying to get all the secrets to its success out of its creator, Mathieu Nouzareth, this Friday as part of our panel on Facebook’s platform.

But mobile has yet to kill the web — if that bit of hyperbole ever becomes reality. Meanwhile, Facebook has become more central to how other startups are gaining traction on their own sites.

Airbnb, for example, has built Facebook into its identity system, to help people renting out their homes get more social context around who they’re letting in. Did this Facebook data turn Airbnb into a market leader? Joe Zadeh, product and innovation lead for the company, will answer questions about whether Facebook APIs can help startups win.

You’ll have to show up this Friday to hear about all the details. You’ll also have to buy one of these tickets to get into the awesome August Capital party that evening, because the other tickets are all sold out.

So, those Facebook Ecosystem CrunchUp tickets? Get them here.

Bios from the guys, below, followed by the agenda.

Mathieu Nouzareth is a serial web entrepreneur. He started his career at 23 by co-founding WebConcept, one of the first e-business consulting company in France in 1995. WebConcept was later sold to IconMedialab of Sweden in 1999, still today the largest internet consultancy company in the world (NYSE-Euronext : LBI). He was subsequently CEO of IconMedialab France until 2001.

In 2001, Mathieu and his brother Romain started Boonty.com, one of the leading game digital distribution company. Operating in more than 30 countries with over 180 co-workers, the company has been sold to Nexway of France in 2008. They also founded Is Cool Entertainment in 2006, a leading social casual game publisher. Is Cool is now listed on the NYSE-Alternext market (ALIS) and has become of the largest European Facebook game company.

In 2009, Mathieu and his brother Roman have started another game company, FreshPlanet, based in New York. FreshPlanet is the developer and publisher of SongPop. Mathieu is a graduate of the Grenoble School of Management and holds an MBA from Pace University in New York. He is a frequent panelist at tech conferences such as LeWeb Paris, CES Las Vegas, GDC, Casual Connect. 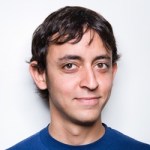 Joe Zadeh (a.k.a. “Joebot”) is Lead of Product & Innovation at Airbnb, a community marketplace for people to list, discover, and book unique spaces around the world. Much of his efforts are focused on keeping engineering and design tightly integrated to enable world-class online and offline experiences.

He joined the company as an engineer when the entire product development team worked out of a bedroom in a San Francisco apartment. In a previous life, Joe was a research scientist and holds a Ph.D. in Bioengineering from Caltech and a B.S. in Computer Science from Northwestern University.

3:30 PM Panel: Social Ads: What’s Working, What’s Not, and Where’s Everyone Else?