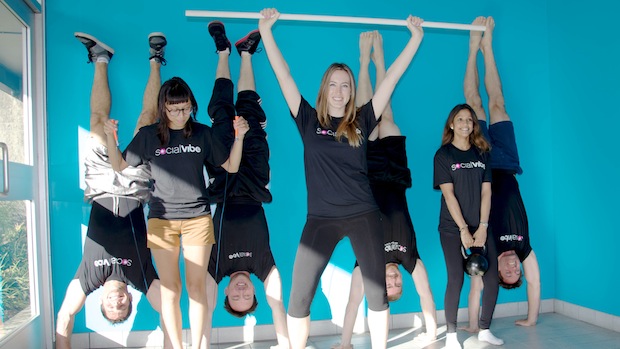 It’s surreal to see an entire startup engineering team that could double as a crew of volunteer firefighters. Yet, for the growing list of startups that are sending their workforce to the Navy Seal-friendly gym phenomenon, CrossFit, having an entire team of buff employees is surprisingly realistic. “We carry so much more energy throughout the the day after a workout,” says Neverware Co-founder Jonathan Hefter, whose entire team regularly treks down to the Black Box Crossfit Gym in New York. The startup life has “a strong culture around group activity and intensity, and we found that those two things really describe the Crossfit experience.”

Crossfit began as a one-man operation in the lazy-beach town of Santa Cruz, California. It quickly found a following in elite fighting forces around the globe after founder Greg Glassman began posting daily workouts online. Now, in under a decade, the exponentially expanding exercise movement has more gyms than Gold’s, has its own ESPN-aired annual competition, a thriving online community of bloggers, and a multimillion dollar economic ecosystem of suppliers.

To be clear, I’m a big fan of Crossfit. I know there are some folks who have problems with Crossfit, as they should. Not every workout is for everybody.

While each gym is independently operated, there are two elements that define the Crossfit DNA: group workouts and high-intensity functional movements. Everyone, from pregnant soccer moms to SWAT team members, do the exact same workout (with varying weights) at the exact same time at hourly intervals throughout the day. Having experimented with crossfit workouts alone myself, I know that I can’t come close to pushing myself as hard at the end of a workout than when I’m competing with 10 others.

Second, most workouts combine the functional movements of Olympic lifting, calisthenics (pushups, pullups) and gymnastics into 10-20 minute sprints (yes, the entire workout is 10-20 minutes). Here’s a sample of one such workout:

While many startups are splurging on sophisticated digital platforms that bribe their employees to walk an extra half-mile a day, the intensity and popularity of Crossfit demonstrates that our dismal health record might be because our expectations were too low.

“We didn’t pressure anyone,” says Josh Rangsikitpho, CTO of social advertising company, SocialVibe, who has found “very high retention rates” of his team who slowly joined up for the company’s Crossfit time. Of the 22 of who eventually signed up, he estimates that only 6 have dropped out. Rangsikitpho credits the impressively high retention and growth rates to a bit of water cooler envy: seeing your colleagues transform into fitness buffs is a strong motivator, as is the desire to join in on the conversation, “there’s a huge amount of camaraderie and competition at the same time,” he says.

Even better, he gushes, about 50% of his engineering team has stayed true to Crossfit’s rigorous “paleo” diet, a pre-historic nutrition regimen that cuts out all grains, dairy, sugars and chemicals and limits fruits and nuts (basically, it’s local vegetables, grass-fed red meat, and wild fish). Such a diet is difficult to maintain, unless there’s a community at work swapping cooking tips and “razzing” colleagues who they see fall off the wagon.

It should be noted that joining Crossfit isn’t as easy as walking into a Gold’s Gym: it’s expensive (+$200 a month) and quality varies. As the New York Times points out, Crossfit gyms (or “boxes”) depend entirely on the culture and leadership of the crew. Since gyms are licensed out, they’re at the mercy of the coaches and people they recruit to join first. Given the fine line Crossfit balances between intensity and injury, getting a meat-head for a coach can be dangerous. I sampled more than one box before committing.

One way organizations get around the varying quality is simply to build their own gym, if they’re big enough. Reebok, the official partner of Crossfit, is conducting what could be the largest-scale experiment in workplace elite fitness on its own campus. Employee signups ballooned from roughly 60 Crossfitters to 425 in a little over 2 years (or a little more than ⅓ of their 1,100-strong campus). Reebok plans on conducting research on the health and productivity impacts of the experiment, 50-year-old Reebok IT specialist, Cornelius “Corny” Reynolds, has become a fan. “Cross-Fit also helps dispel the myth that all IT people are geeks and pinheads,” he writes, “CrossFit not only changed my routine, but changed my life.”