The buzz about a possible acquisition by Facebook has almost completely died down, but Opera today released an update on the state of its business that nevertheless highlights how its own strategic direction is closely following that of its rumored suitor.

The combined number of active users of Opera’s mobile Internet browsers has now topped 200 million, nearly double the figure a year ago, with pageviews more than doubling to 115 billion. And just as Facebook highlighted in its earnings call last week that emerging markets and mobile use were a key part of its advertising story, Opera in its State of the Mobile Web report has also zeroed in on how well it’s been performing in one emerging market in particular: Africa, where Opera’s figures reveal that Facebook is, by far, the most popular site in the region.

Last week, during Facebook’s Q2 earnings call, COO Sheryl Sandberg made a specific reference to mobile usage in emerging markets and how it relates to Facebook’s developments on the advertising front, specifically around mobile advertising. “We recently enabled our advertisers to buy us exclusively in mobile News Feed. We’re seeing strong interest, particularly from our clients, who know mobile is critical to reaching new customers, especially in emerging markets,” she said.

Coincidentally, Oslo, Norway-based Opera, too, is focusing in on mobile growth in emerging markets — perhaps, like Facebook, a response to addressing those places that still have a lot of room to grow in comparison to more developed countries where adoption is slowing down.

With much of the mobile use in Africa still based on feature phones, Opera’s Mini browser (which works on both feature phones and smartphones) is taking the lead, with 36 countries on the continent more than doubling their use of feature phone-friendly browser. Opera has published a pretty cool interactive map of the continent that gives you a look at Opera stats combined with those of the country in general.

Among the individual country highlights: Opera notes that Libya, post revolution, has grown the most of any country in the region in terms of users, pageviews and data consumption, respectively 323,267% for users; 1,886,839% for pageviews and 1,498,984% for data usage.

Another politically troubled country, Côte d’Ivoire, also showed strong growth. Opera Mini users there were up by 600%, with pageviews up 744% and data use up 760%. This is in a country with a population of 16 million, where mobile penetration is at 15 million, and land line penetration at a tiny 230,000. That underscores just how important mobile is there.

In general, higher growth rates for pageviews and data use, compared to users of Opera mini, are a mark of better engagement. Opera notes that this is the bigger trend across all of the continent. “Across Africa, data growth seems to outpace page-view growth. This fact suggests that Africans are browsing larger pages and most likely, using richer, more advanced websites,” the company writes. It so happens that data use and pageview increases also provide a boost to Opera’s mobile ads business.

And guess what the top domain is in almost all of the continent?

It’s Facebook. In fact, the only three countries where Opera doesn’t list Facebook.com as the top domain are Algeria, Angola and Guinea, where Google has the edge.

Interestingly, Africa is also a mark of where Nokia can still claim to be totally dominating the market, with its feature phone handsets making up almost all of the most popular models in every country.

On to more general stats about Opera, the story is still good but not growing as spectacularly as it is in that specific emerging region.

Opera says that most of the 200 million users overall of Opera’s mobile browsers (it also has a small business in desktop) is almost entirely around Opera Mini, the browser that works both on feature phones and various smartphone platforms. The smartphone-only Opera Mobile, it says, currently has only around 17 million users, although as you can see in the table below their percentage of the overall number has been steadily growing: 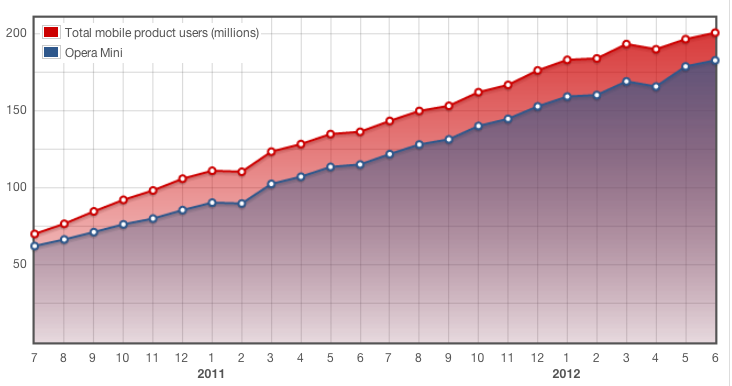 Opera notes that the 200 million active-user figure is a rise of 47% over June 2011, the same rate Opera reported last month but definitely down from growth in March 2012 — when Opera noted that users had been growing at a rate of 67% (the company had released a big update of Opera Mini at the end of February, which may have accounted for that spike). An Opera spokesperson tells me that the company does not release figures on the total number of downloads and inactive users.

What’s perhaps encouraging for Opera is that, as we saw in Africa, globally engagement among those using its browsers is also up: Opera notes that in June 2012, it clocked 115 billion pageviews, which was a rise of 55% on June 2011 — effectively, the pageview growth rate is outpacing that of user adoption, implying that people are spending more time with Opera than before.

Similarly, data consumption is up to over 2 petabytes, an increase of nearly 90%. Both of these numbers are key to Opera’s mobile advertising business — a part of the company where Opera continues to invest so that it, like other browser companies, can generate revenue from all that traffic on its platform.