Like many parents, Dan Yang was fascinated by her young daughter’s obsession with her iPhone. As she went through the process of planning the best way to introduce her to technology, apps, and games, she quickly became frustrated with the lack of educational technology made specifically for children. Unlike many parents, however, Yang is an entrepreneur and optical engineer, so she did what any entrepreneurial, geeky mom would do: She decided to hack her own solution.

Yang developed VINCI Early Learning Systems and VINCI tablets — which she believes to be the first FDA-safety-compliant tablet that is designed purely for youngins. The learning tool, as she calls it, is itself built to develop (along with the content it includes) thinking skills, social, language, and literacy abilities, along with quantitative and logical reasoning, etc.

The tablet found an audience, and VINCI has since grown into a 50-person company. Of course, a tablet and learning tool without a supporting network or resources to supply it with content is a lonely device. So, today, the startup is announcing the release of the VINCI Kids Library, a library for kid-focused digital content and apps, including interactive stories, learning games, and over 500 titles at launch — with what Yang expects to be 1,000 titles before the end of the year.

Tailored for kids between 18 months and nine-years, the company believes it has built (and is building) the world’s largest digital children’s library. And in case that doesn’t already sound appealing to parents, the founder tells us that the library is free of not only commercials, but adult content, violence, and in-app purchases, which adds to its appeal as a safe digital learning environment for your kids.

To help fill its library with content, VINCI has partnered with recognized children’s educational content providers like TVO, The Jim Henson Company and Mightybooks. And while the VINCI is powered by Android, unfortunately these niche app/content libraries are always going to struggle against the volume of content on the App Store and Google Play. But for those parents who aren’t completely comfortable with their youngsters messing around with iPads, that want something built specifically for kids, it seems like a great choice.

“The Kids Library is designed to be a one-stop shop for your child’s entertainment and learning,” Yang said. “With hundreds of apps, storybooks and videos children will have access to a high-quality, safe digital library that inspires continued learning.”

Yang and company are also inviting game developers to help create apps for the Kids Library. As incentive, the company is offering hackers access to marketing opportunities, special features and announcements, and a 75 percent rev share for those qualified Android apps. Not bad.

Oh, and content is free for now, so get on it. 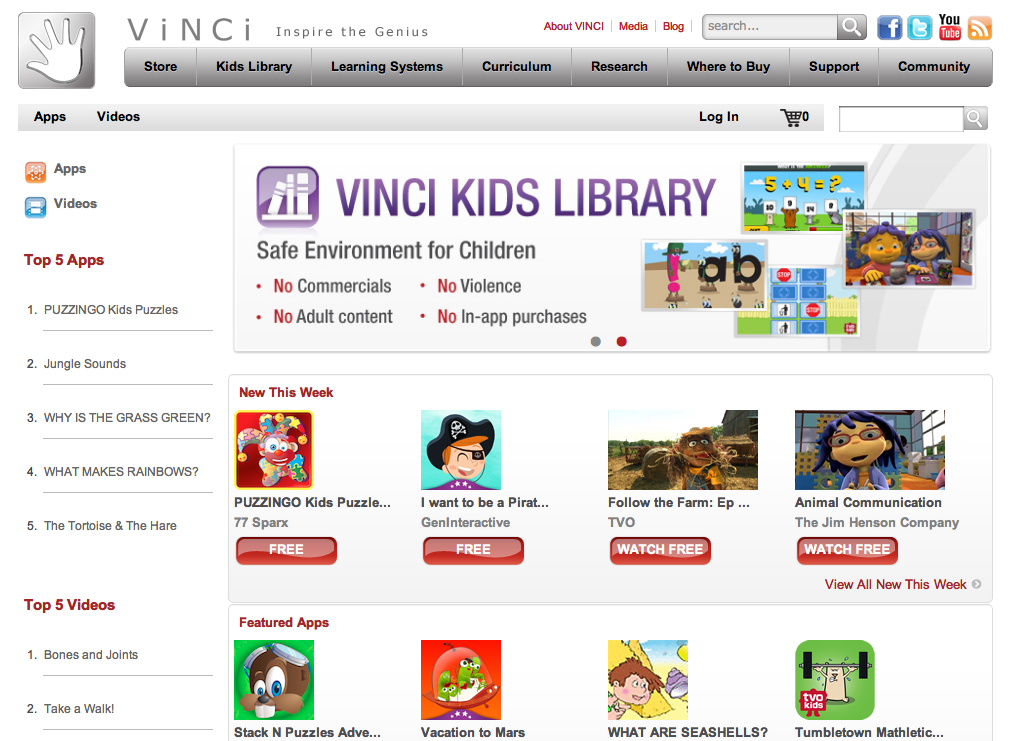