When the Showyou app first launched last spring, it was a bit of a revelation. The iPad app made discovering and watching videos on the iPad a breeze. And oh, are there plenty of videos to check out. With major partnerships at a number of the major video sites — like YouTube and Vimeo — it’s indexed more than 50 million online videos to choose from. But while Showyou is best known for its iPad app, it’s come out with a totally revamped app for the iPhone that it hopes will help people find and share interesting videos on the go.

The use case for the iPad and iPhone are clearly different, and that’s reflected in the engagement numbers: Showyou users on the iPad watch about seven or eight videos a session, which can average up to 35 or 40 minutes a piece. These people are watching during primetime hours, maybe in bed as a way to decompress at the end of the day. But iPhone users are typically video “snackers” — they watch three or four videos at a time by comparison, and their viewing sessions tend to be spread more evenly throughout the day.

With that in mind, the Showyou team sought to create an iPhone experience that would increase engagement and would make it even easier to discover and share videos with friends and followers on social networks. But before it did that, it needed to build a whole new back end, which helps the app to rank videos that viewers are more likely to watch. It’s not just about bringing the most recent shared content to the user, but providing a more personalized experience.

Without the larger screen real estate of the iPad, which provides a wall of videos, the iPhone app provides a feed of videos that use social signals to identify the best videos shared by friends. The app takes into account how long it’s been since you’ve used the app, and highlights popular videos that have been shared or appeared since last opening it. It also takes into account the social content of who shared a video to determine what you like, and to provide more information about who shared it and why it appeared in your feed. 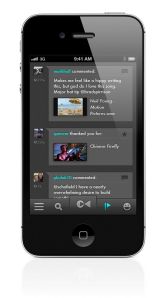 It’s also improved its social sharing functionality. In the new iPhone app, users can single out individuals on Showyou or in their iPhone contacts lists to share with. If they don’t have the app, they’ll get a link by email… And if they do, they’ll receive a Showyou notification instead. Then they can seamlessly watch in the app, without getting kicked to YouTube or another site.

In addition to all this, the startup has improved video playback, making it seamless. It’s also made tweaks to search, making it a main navigation item. Users can also now navigate via trending search terms. Finally, the Showyou app has improved user profiles, providing more details and making them easier to navigate.

All in all, a pretty significant update and pretty cool app. Will it make people watch as much video on the iPhone as the iPad? Probably not. Will they watch better videos? Probably yes.