Today, a company called payvia is launching a new mobile payments platform for carrier billing. But unlike several in this space, payvia is not a new player in the mobile industry. The company was spun out from m-Qube, which started a transaction and carrier billing network in North America in 2004. Originally focused on supporting carrier billing for entertainment services (think ringtones, wallpaper, etc.), the goal with payvia is to help the company transition into digital goods and services.

The company competes with a number of services, including Boku, Zong (now eBay-owned), Bango, Netsize, Fortumo, boxPAY, and others, and it has not been above suing its competitors for infringing on its patents in the past. But now, the goal isn’t just to fight the competition with intellectual property claims, it’s to take the upstarts head-on by offering a similar service. 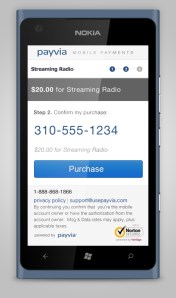 “Our focus is digital goods and online services,” says payvia co-founder Darcy Wedd, explaining the company’s focus in the mobile space. However, he adds, “the carrier networks are not ready to take that next step into physical goods,” – meaning, payvia can’t fully replace an online checkout system.

Payvia will be made available to app developers, web app developers and online merchants who are selling digital goods, he says, and he teased that it already has two major brands signed up at launch. Unfortunately, payvia hasn’t been given the go-ahead to announce those companies’ names at this time, but Wedd says they are well-known brands that will be immediately recognizable to anyone. He couldn’t even give a hint as to what sort of company one brand was, saying doing so would be too obvious, but said the other brand is communications company with a platform for making phone calls. (He did mention “streaming music” several times during the call as an example, and the screenshot shows a generic music service as well. That’s not a confirmation of anything, just a guess.)

For end users, payvia works both online and on mobile, offering an alternative checkout system where you provide your phone number to make a purchase, as opposed to entering credit card info. On mobile, it’s a two-click process, as the technology can auto-detect your device and phone number. On the web, you enter your mobile number and then you’re sent a PIN number via SMS which you key in on the screen. The business model is par for the course for carrier billing – a percentage of the transaction value is taken for each purchase customers make. Wedd says carrier contracts are confidential, but it offers “more favorable revenue splits” with merchants and developers than app stores, to give you an idea.

But Wedd stresses that payvia’s big advantage here is its history of working in the space. “It’s mostly the heritage,” he says. “I think a lot of the announcements [from others] with the carrier connections are actually indirect,” he remarks, regarding the competition. “We are a large company, we do have long-standing relationships, we focus only on those direct connections, and that does set us apart.”

Based in L.A., with offices in Boston and Seattle, payvia has 30 employees – small compared with M-Qube’s 120. But it’s in no need of immediate financing, as M-Cube is already a profitable company.

Developers looking to integrate payvia into their own applications can use an API for online and mobile web carrier billing checkouts. After the launch of payvia’s initial merchants, an SDK for app developers will be made publicly available and will be free to download and install (Android-only, as iOS is not supported due to restrictions from Apple).

Currently, payvia only offers billing on Sprint and T-Mobile, but Wedd says that the company will have “more to announce” when its first merchant partners make their debut.