Maily is a new iPad app launching today that aims to be your kids’ first email application. Because, you know, kids these days and their busy schedules. Ha! In all seriousness, Maily is a communications tool that lets kids easily share messages and drawings with family and friends through a simplified interface that even a small child as young as three can manage, at least according to early tests.

The app very much reminded me of FamJam, the latest creation from 500 Startups-backed HighScore House, which debuted just last month. Like FamJam, Maily offers a variety of brushes, pens, stamps and lets you take a snapshot of the picture on the screen. Co-founder Raphael Halberthal tells me that there are more features in the works too, including the ability to add text using different fonts and the ability to send audio messages.

I previously remarked that FamJam felt a bit busy for my tastes (it felt like Saturday morning cartoons, I said: loud, colorful and a lot to look at). Maily, however, goes in the opposite direction. It’s very basic with few controls. That means it will probably work better for kids on the younger side of the supported age range (3-8), but older kids might like FamJam because it “feels” like there’s more to do. 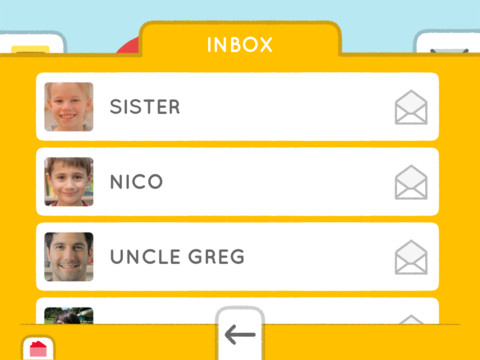 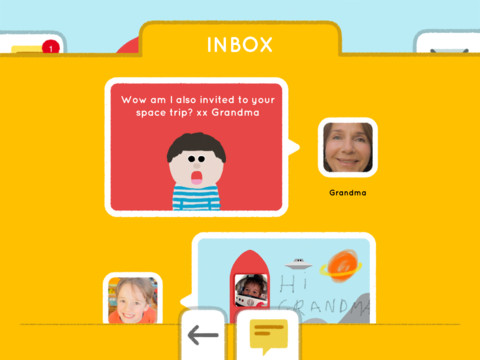 For parents, a password-protected registration system lets them connect with Facebook to quickly sign up and add contacts, so kids’ will see photos of their family’s faces instead of just names when sending items via email. Parents will also need to know the contacts’ actual email addresses upon setup, as that information does not come over from Facebook.

To send a message, there’s a button on the right which kids tap to be taken to the contacts list. And when the family member or friend replies, the kids are notified via an icon on the left of the app’s main screen, which takes them to their inbox.

What’s somewhat surprising is that the Maily app comes from two founders, Halberthal and Tom Galle, both based in Brussels, who are not parents themselves. In fact, they’re not even married with kids on the way anytime in the near future. But they’ve really built something interesting here for that demographic.

Given that their backgrounds are in advertising, I asked Halberthal where the inspiration came from for the app. “We have lots of friends that have children between three and eight, and we saw that they’re really addicted to tablets and the iPad,” he said. “And we were pretty amazed.” He said that they realized there was not one communication system designed for kids of this age, so they decided to build one.

Following eight months of effort, this completely bootstrapped app is now available, as something of a market test. If it takes off, both founders are open to relocating to the U.S., continuing development, and possibly raising funding to support further efforts.

The app itself is free and will remain free, but Halberthal says the business model may eventually include in-app purchases or the ability to customize products from kids’ drawings. However, he stressed that these will never be displayed on the kids’ side of the system, only the parents’ dashboard. “And even if we consider at a certain point to do advertising, that would never appear in the kids’ environment,” he says. “That’s really fundamental for us.”

The new app is a free download for iPad here.