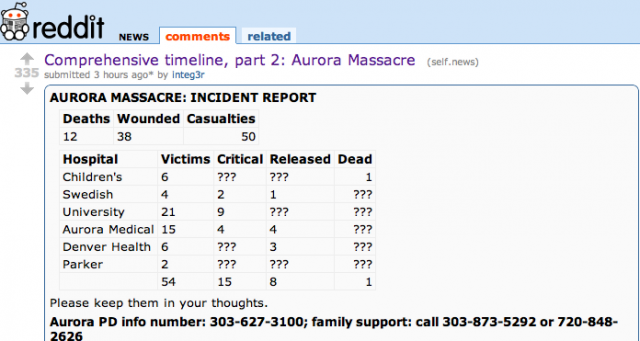 Victims and witnesses of last night’s horrific shooting in Aurora, Colorado have turned to Reddit for support and news updates, transforming the online news aggregator into one of the best sources of information on the evolving story.

A continuously updated board of victim status and their current hospital sits atop a rolling update of critical news, including pictures, video, and essential information about the situation, making it quite possibly the quickest way to get essential news for those needing information on potential victims (more informative than the government websites and local news channels). The incredible outpouring of eyewitness journalism and support has turned the humble news aggregator into an impressive source of information in the midst of a national crisis.

Early after the shooting, a man claiming to have been shot posted photos of his wounds in the “WTF” vertical of Reddit (warning: graphic photos). “i am one of the 50 wounded in the aurora theatre shooting. here are a few photos of my very lucky but nonethless terrifying brush with death. my thoughts go out to those less fortunate than me,” he wrote, which has received 5800 Reddit votes so far and hundreds of comments.

The initial post was followed by another alleged victim, who reached out for support to “calm” her nerves as she recovered from the incident. “Someone came into our theater at the midnight release of Dark Knight Rises and began opening fire. Who here on Reddit can help me calm my nerves?”, she posted, which opened a deeply personal conversation between the user and the commenters, including other victims looking for the same solace. “Thank you for the well wishes everyone. Heart is still racing,” she followed up, in thanks to the community.

Perhaps the most endearing utility of Reddit’s outpouring of support came in the form of spreadsheet of victim status, updated with the number of deaths, wounded, and casualties, including their location at the 6 area hospitals. Admittedly, the information likely contains some inaccuracies, given the loose nature of the submitters and turbulence of the situation (Twitter has been known to spread misinformation in time of crisis).

The impressive usefulness of Twitter compares interestingly to common news sources and government sources. Aurora.gov’s website was crippled by the incoming traffic, NY Times map of the situation was certainly helpful, but not to those looking for support, and I couldn’t find any of the same information on the Colorado 9 News website, which was covered with live video and testimony of the story, but no immediately apparent information on victims. The comparison stands as an intriguing testimony to the priority of user-generated content vs. more traditional outlets.

Our hearts go out to the victims and their loved ones of the tragedy. Please be respectful in the comments as we discuss the proper role of journalism and online community for this incident.