Finding the right songs to play at the right time is one of life’s great problems, and there’s no shortage of people out there trying to solve it. Case in point: the team from San Francisco-based Gravity Mobile has just brought a revamped version of their mood-conscious Habu music app to iOS after a brief spell of Android exclusivity.

Unlike other conceptually similar apps like Songza that offer up streaming music choices based on times, events, and genres, Habu takes the music you already liked enough to load onto your iDevice and thoughtfully divvies them up into mood-centric playlists.

Getting started with the app requires a fair bit of patience, as it analyzes all of the tracks stored on your device and pings Gracenote’s sizable store of musical information to determine what mood each track belongs too. Your mileage is going to vary depending on just how big your mobile music collection is — it took Habu about 10 minutes to categorize the 600+ tracks stored on my iPhone, though users can fire up their tunes before the process is complete. 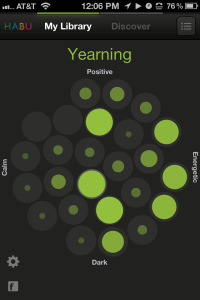 The first thing that users will notice when all that categorizing is done is the app’s handsome minimalist design and green 25 circular splotches, each of them representing different moods and emotions — think “easygoing,” “yearning,” “brooding,” “fiery,” and “empowering.” Gravity Mobile wanted to create a strong visual representation of your musical taste, and they based their design off of parent company Gracenote’s MoodGrid.

It’s been retooled and refined in its transition onto a mobile device, and now acts as something of a user’s unique musical fingerprint. The brighter each one of those splotches is, the more tracks have been lumped into its corresponding mood playlist, making it painfully obvious what kind of music the user is into.

A quick tap on any of those segments automatically kicks off a playlist of a user’s sorted tunes, an approach that’s thoughtful but a bit flawed since it’s difficult to tell what a particular mood circle actually is before it starts playing. Instead, Habu seems to want users swiping across that mood matrix to skim through those playlists, which honestly took a little getting used to. Gravity Mobile’s product and design director Jeff Benson mentioned to me that the team was gunning for an interface devoid of clunky menus and extraneous elements, which seems a bit like a double-edged sword here. 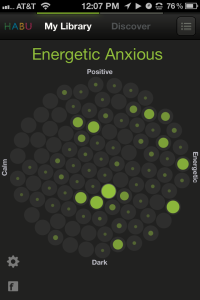 As it turns out, it’s a snap to make that mood matrix even more specific. A quick jump into settings allows users to view their musical fingerprint broken down into 100 distinct mood segments, and some of them are terribly granular — as it turns out, most of my music falls into the “energetic anxious” category, with “sensitive/exploring” and “heavy brooding” tracks.

Of course, there’s only so many times you can listen to the same tracks in a playlist before wanting to pull your hair out, which is why Habu has a handy little discovery tab. From there, users can scope out the same mood matrix and pop into each of those different segments to see what other music they may enjoy. Users are rerouted to the track’s entry in iTunes once something catches their fancy, and once that purchase is complete Habu categorizes and pushes it into the right playlist.

Once you get a hang of navigation, Habu for iOS is a neat little app to play with and seems to stand well above its Android counterpart. What really has me excited is what the team has planned down the line — Benson aims to take Habu and introduce a way for it to handle external data (think time, GPS data, speed of movement, event information, and the like).

“We’re looking at taking a lot of data points and creating predictive models,” he said. “That way, if you’re driving to a baseball game, Habu will be able to figure that out and play the appropriate music.” Forget the process of picking a mood playlist; if Benson and his team can figure out how to play what I want to hear when I want to hear it without having to tell an app, we’re looking at a whole new ball game.